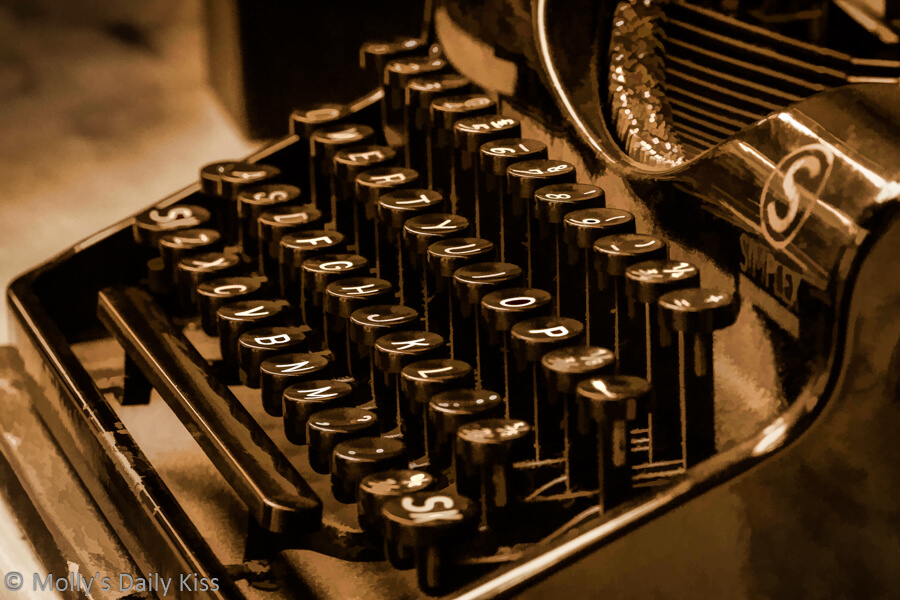 It was the sound of my childhood. Every night I would lie in bed and listen to my Mother in the tiny little box room next to mine writing away on her typewriter. The distinct thump of the keys as she worked was so familiar to me that when I finally left home for university it took me weeks to relearn how to drift off to sleep in the new silence I found myself in.

I remember asking her once what she wrote in her little room every night. I think I was about 7 or 8.

“Letter to people you mean?”

“Yes my darling, letters to people”

It didn’t dawn on me to ask her why we never seemed to actually post any letters. Her explanation satisfied my youthful curiosity and even as I grew older I never thought to question her again. It was just what Mummy did. She wrote letters.

Sitting here now all these years later in her little room I realise that my child view of the world, of her world, was very wrong. The old typewriter still sat on the little writing desk. It was just as it was every day of my childhood and every time I had visited her since heading off into my adult life. Just this time I wasn’t visiting with her I was coming to decide what to do with all her stuff now that the funeral was over.

I don’t know what I thought I would find, just her stuff I guess, clothes and keepsakes, maybe some photos but this, I could never have envisaged this. There were hundreds of them all neatly stored in shoe boxes with the year carefully penned on top. They started in 1976, the year I was four, and ran right up to the present year.

I miss you so much. I can’t believe that it has been almost a year. Sometimes I still think I can taste your lips on mine as if you had just left me breathless and swooning to catch the train. Do you think about me? Do you remember how I tasted? How I moved beneath you? How our bodies fitted together so perfectly? I know I do Simon. Every single day

Today she is 8. She is the most delightful child, thoughtful, happy, and contented. We bought her a new bicycle for her birthday. She whizzed up and down the street on it with her friends laughing and chattering, her long dark hair flowing out behind her. Sometimes when she smiles up at me it is like looking down into the memories of your beautiful face.

It will be soon my love. I can feel it. The Doctor says I have a while yet but I think he is wrong. These bones are old and tired and I am finally ready to be by your side again

There were more, many more, I had only read a small selection so far but sitting here in her room with the boxes of unsent letters scattered around me I realised that maybe I had not known my Mother very well and possibly never known my Father at all because the man who I had always called Dad was not called Simon, but Paul.

This is my first contribution to Friday Flash. The rules are use the image as a prompt and write no more than 500 words. Just in case Leonora checks mine is slightly over 500 but only by a tiny bit. It is not the most wicked piece of writing but sadly the word count restricted me exploring the Mother’s letters more but in my mind those letters are filled with lust, love and longing spanning a 40 plus years and all written out on her trusty old type writer.

We don’t often get to see our parent’s secrets, do we? Great story =D

No, although I suspect we all find things out about our parents at some point that surprise us

A fine first contribution, Molly. A Mother’s Day Story. Lots of clues in the letters, wouldn’t that be something to find?

Such an engaging story, and in so few words. I could hear the clatter of keys, so vividly did you depict the scene. And the juxtaposition of child curiosity and adult discovery… It was like reading a mini memoir.

Thank you very much. I had it all mapped out but in my head but the word count meant keep it short and tight. I think it worked though and hopefully gave people just enough to fill the possible scenarios of what might have been her Mother’s story

This is such a lovely piece of writing! Xx

Typewriters are so evocative aren’t they? I loved this story. I want to hear more from this mother. She sounds lost and melancholic without her Simon.
Beautiful x x x

I would really love to read the longer version of this story! <3

We shall see, maybe there is more, maybe you have to just imagine the more

WOW!…
I felt my heart break a little!

i am not that strict, happy to have you as a contributor and what lovely flash–made me glow!!!

You mean you don’t sit down and count the words? *laughs Thank you for the comment and I look forward to the next prompt

(Also website racheldevineauthor.wordpress.com)
I loved this story. It was very poignant. It reminded me of when, after my mother died, I found an old suitcase containing three years of letters she had received from my Dad during the 2nd World War. I finally came to see Mum and Dad as people, and not just parents.

Molly, you are so right, we both explored similar themes. A bit spooky. Loved the line about needing to relearn how to sleep without the keys clacking away.

The first letter to Simon reminds me very much of the dialogue between Celia Johnson and Trevor Howard in Brief Encounter. Especially with the reference to the train. One of my favourite films x

Ohh I never thought of that connection.

I can’t help but ask one question: I wonder what Simon says?

Haha, I think that is a very different story