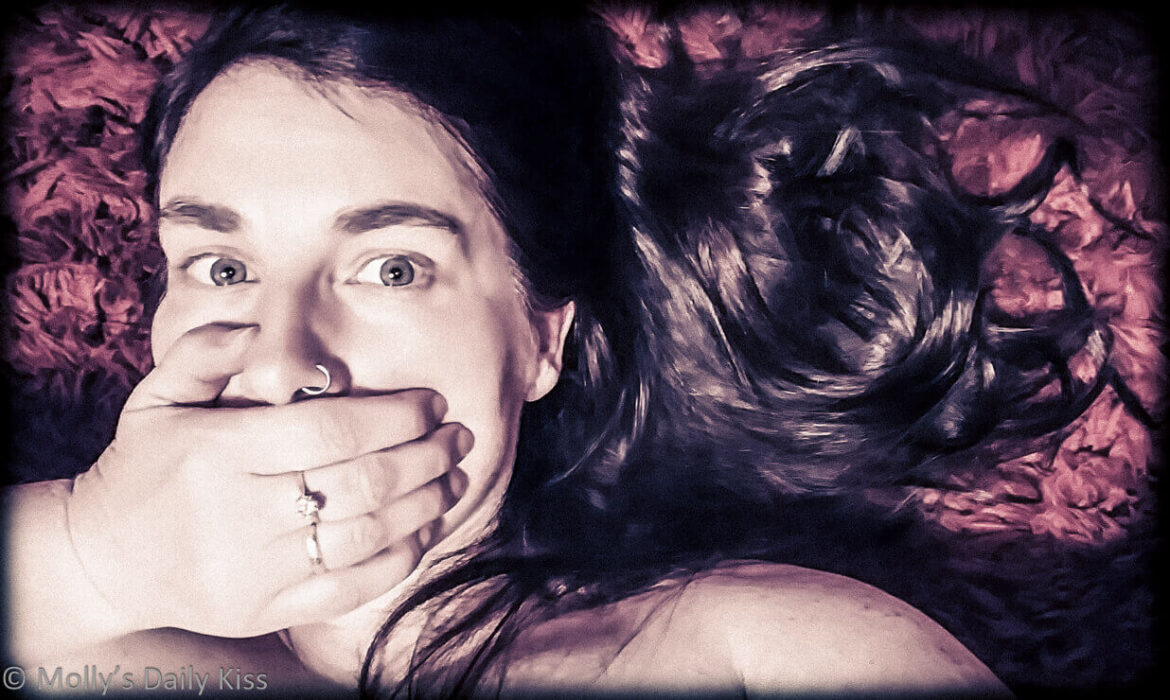 When I first start this blog back in 2010 no one knew who I was. I had a couple of readers who were friends and Michael and that was it. Of course things started off slow, 10 readers a day, then 20, then 50. I can clearly remember being ridiculously excited when I got my first 100 hits in a day. However I was for the most part totally anonymous. I didn’t start posting my self portraits until about the April and even then I went to great lengths to conceal my identity. There were definitely no pictures with my face in and I made sure there was nothing too revealing in the backgrounds either. This space was purely a creative outlet, a attempt as self discipline when it came to writing. I was worried that if people found out it might cause issues with my children and also living on my own at the time I also had concerns that maybe I would making myself vulnerable to unwanted male attention in real life if people knew who I was and where I was.

However it was also very freeing. No one knew me and I think it gave a freedom to my writing which maybe I have lost a bit as time has gone on.

There have always been subjects that I have omitted from this blog. My relationship with my ex husband is one that I mostly don’t write about. We never agreed that formally but I have always felt like he never signed up for that to be shared publicly here but more importantly than that our children definitely didn’t. It has always felt like a silent agreement, especially while the children were young, that I wouldn’t write about him or that time in my life in detail and he would turn a blind eye to it. I am actually fine with that. It feels like the past and one I have truly left behind. Sometimes it gets referenced to put context to my thoughts and feelings on things but that is the extent of it.

There are also my children. A subject mainly not explored here in my writing. They too have not signed up to be the subject of my blog. A bit like above they will get referenced from time to time and I have written one post about the women in my life that referenced my daughter (I read it to her before publishing it and she was fine with it) in more detail but mostly they are just fleeting references. My son is now 19, a fully fledged adult who has mostly left home (I say mostly because university means they keep coming back) but now that he is over 18 I would love to get him to write something for me here maybe about what it is like to have a sex blogger as a Mum or really any subject he would be comfortable tackling but so far he has declined the offer and that is absolutely his right to do so. His story is his to tell after all and the same goes for my daughter.

Mostly I have spilled my guts here on this blog. I have explored many challenging subjects here in regards to my desires and kinks. For example the dark consensual non consent fantasies I have or the filthy things that turn me .There are also the images that I have posted which have been challenging such as(graphic images featuring period blood)  Challenging Sexy and Bloodbath as well as images featuring blood as a result of impact play and other bruises and marks left on my body. As well as images that I feel very revealing to me personally such as Inside my mind and The Beauty of Truth

Not to mention all the fiction I have written exploring challenging subjects such My Valentine, that is essentially about being turned on by a stalker, Never Trust a Tory about cheating, To protect and Serve and Fucking Women both about pretty abhorrent men is just a tiny selection of things I have written about.

And yet there remains subjects unexplored.

I have contemplated blogging elsewhere under a different name where no one would know it was me and whilst it appeals on some levels I know it is not really the answer. THIS is my space and this is who I am, writing somewhere else almost feels cowardly and definitely flies in the face of everything else I have done here, which is to explore all the subjects even when they are difficult and with as much honesty and openness as I can. Sometimes that is easier than others. Some subjects whilst difficult I have accepted as part of me, the truth of me, but others have been more complicated. Combine that with them also being things that Michael and I struggle with and the result is that I have censored myself. I think we all do it to some extent and to be honest sometimes I think it is right thing to do. Words have power and sometimes the right thing to do is to keep them to yourself but sometimes you have to publish and be damn. Finding that balance is tough but lately I feel a bit like I have become too censored and I want to try and change that. It means being brave. It means being honest with myself. It means opening up about things that are difficult and challenging and that is not always easy to do but as a wise man has often told me. If it was easy, anyone could do it.

Down the rabbit hole

It is so easy to forget that all bloggers had to start somewhere, it makes me smile that you still remember what it was like in the early days. It is interesting to see your reasons behind not sharing certain things, and your fears around sharing others without the anonymity, so thank you. I also can’t wait to read the posts you included.

I can relate very much to what you have said here and know that there are things I struggle to say too. Having said that, your blog comes across as one where you do tackle the hard stuff and are open and not afraid to be who you are. I think that is what makes you so good at what you do although there will always be some parts which you choose to keep private. I look forward to reading more about you 😊

“If it was easy, anyone could do it.” I always love that line.

Without intending it, our posts are on similar veins…and I agree, certain things really are off limits. Like you, I mention my kids and being a parent, but my blogs are the space to talk about their lives or share too much of them.

I’m not into easy things, but I’m glad there are veterans around to give guidance!

Well isn’t it great that you started that blog and encouraged so many others ☺ so that they may open up and feel the freedom too.

Me too. I shall continue to suggest it from time to time and maybe in the few years time my daughter might be up for it too

A truly incredible post Molly. You’re so right about everything here. My blog was anonymous too… More and more it has evolved to be open me. So yes, there are subjects I stear clear of because that. I don’t think it’s cowardly to have another secret place at all x x just the cycle starting over in a way x

A good line. It’s never good to become to censored, because then you lock things up inside; things you might need to let out, even when difficult. Sometimes if we censor ourselves, things end up festering inside, and that can never be a good thing, as it can literally make you sick. I look forward to seeing you open up, and once again tackle some difficult subjects. I look forward to read more.

I appreciate your openness and honesty in this. I used to write about my struggles with infertility, and because I knew my husband read the blog, there were often things I wouldn’t say. I censored my own feelings and writing because I didn’t want him to feel bad. Knowing the balance can really be difficult. Thanks for writing this and for pioneering sex blogging for the rest of us!

Yeah, it is tough juggle to share your truth and also guard against others feelings… I feel I have strayed too much one way but as going to attempt to change that with time and sensitivity

Oh, Molly, you touch my heart when you write things like this! I feel we all go through these things. I definitely have where censoring and worrying about others’ feelings are concerned. Most of my writing is fictional stories but the RL sharing is part of me and when I write them, like so many have said, I cringe wondering what the reaction will be. Thank you so much for sharing this! xx <3

More than likely your son would be embarrassed

Ahh Wayne…. Welcome back you odious little shit stain. Luckily my son is a bit more mature than you are and is able to have a perfectly reasonable adult conversation with me about these things.

I know you’re aware of my own censoring myself on this blog regarding my new (now 4 years old) relationship. It’s been hard because it certainly wasn’t by choice. Then again, as you say, sometimes the right thing (as with your children and ex) IS to censor what you write. It’s been difficult for me. And most times, frankly, I resent it. But other times I am glad I haven’t t spewed every little thing. There’s just times when I could have used someone’s – my friends here – advice or support. It’s a tricky thing to navigate. But I have a feeling you are going to find a way that works for you.

After more than 10 years spilling my guts and telling my dirty secrets online, I am still very anonymous. If suddenly I weren’t it would definitely change the stories I tell and how I conduct myself here. I would resent that. But, on the other hand, I guess there is also freedom there. Sometimes I wish I could be more open, just let the truth fly and show my face to the world. But it wouldn’t be as glamorous as it sounds. I’d take some people down with me.

You are out there, and while I am glad, because your are someone I look up to as a blogger, I can see that it could have its problems and cause it’s own kind of stress.

Thanks for sharing, Molly.