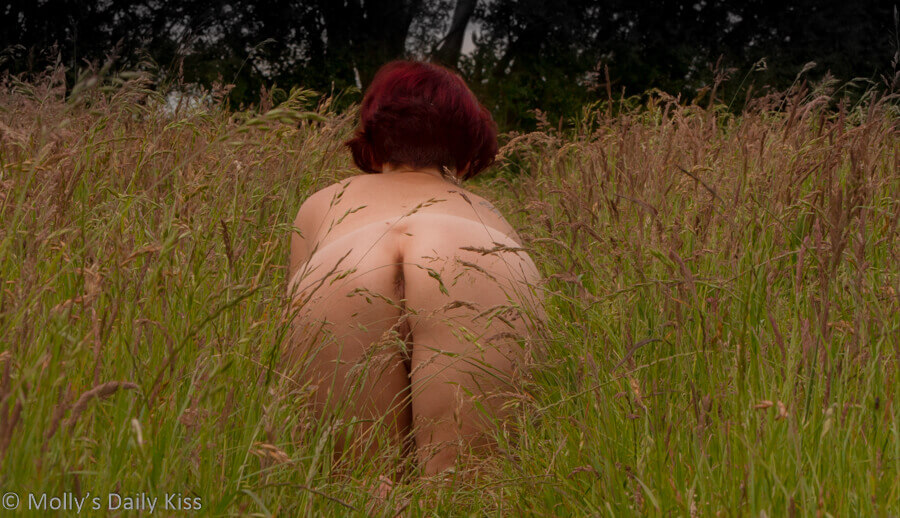 Outside by George Michael

Oh how I love this song. It was released in 1998, a year before the birth of my son and many years before I discovered my kinks but even back then the way it mocked his arrest for “engaging in a lewd act” and poked fun at those who were uncomfortable with sexual freedoms appealed to me. It was subversive and I like that. Of course years later when I discovered my own kinks and eventually my love of outdoor sex it all made a bit more sense to me why I always felt connected to this song in some way I didn’t really understand.

I have always loved being outdoors, despite being a city girl I spent much of my childhood school holidays with my Grandparents in very rural Sussex and there I learned to love the countryside. I love disappearing off into with a map and exploring. I love the solitude and the peace and feeling close to nature but I only really discovered my love of the outdoors when it comes to sex and desire when I started taking my self portraits.

When it comes to outdoor fucking, well I have managed some of that too, although not as much as I would like if I am honest but there has been a delicious blow job in an alleyway, a fuck behind some bushes with me bent over, my dress hitched up around my waist and him with his jeans round his ankles and one delightful time in the woods where he made me lay down beneath him and masturbate while he wanked over me. (Down side to outdoor sex, laying on the woodland floor in the dusk I got bitten to buggery. Hot tip: insect repellent is your friend) And of course there has been some fumbling and kissing in various locations that have left me throbbing for more.

But more is my trade mark really because when it comes to outdoor sex that is basically what I want; More. Despite the wank in a graveyard I would so fucking LOVE to fuck in one or give a blow job or both. There is something about the setting that just sets me on fire. Clearly it is the taboo nature of it but also there is something about being that alive in the face of death that makes me hot. I would also love to find some sort of gritty back alley in a city/urban setting somewhere and be fucked up against a wall, the sounds of the city buzzing round, the dirt and smells making me feel oh so filthy and dirty. It appeals to my slutty/whore nature to be used like that, fucked for his pleasure, in such a grimy location.

I’d love to do it in the long grass in a field somewhere, the thought of someone going down on me in such a location makes me twitch a bit or tied up against a tree the rough bark rubbing at my back with ever thrust of his dick into me. The idea of being hunted like prey and then fucked once caught, well let’s just say that has been the stuff of my masturbatory fantasies for a very very long time now. In fact quite a lot of my outside sex desires are wrapped up with my consensual non consent kink.  I remain hopeful that one day I might get to explore that particular scenario for real as well as some of the others and of course I am most definitely up for a redo on some of the ones already done too.

So yeah, let’s go (and be very dirty) outside….

Born to be wild

Pull down your dress

Can you dig it?

In the company of women

A great post! The only difference is that graveyards make me leery. Though when you think about the long march of history, somebody has probably died just about everywhere at some point.

What a sexy post – and wild creature photo! I feel the need to head out to the bed of crisp autumn leaves that is in my back yard…the freedom and sheer naughtiness of it are just so exciting xx ?

That is a gorgeous photo and I am so with you on the outside – if the weather was good enough I could happily live outside. I am a simple soul 😉 and don’t need many things to make me happy – being outside does!
I used to love that GM song – so witty too x

Never have been fond of going outside…living in the American South my whole life, it’s all humidity and bugs…but this is certainly…inspiring. 😉

I always wanted to fuck someone in a graveyard when I was younger, but then I tried once and there were people in the cemetery doing some kind of ritual at a grave at 4:00 am in the dark; it freaked me out so much I never tried again! ><

Oh my that does sound super creepy

Ha! Looks like we’ve aligned perfectly on this one, right down to the photos.