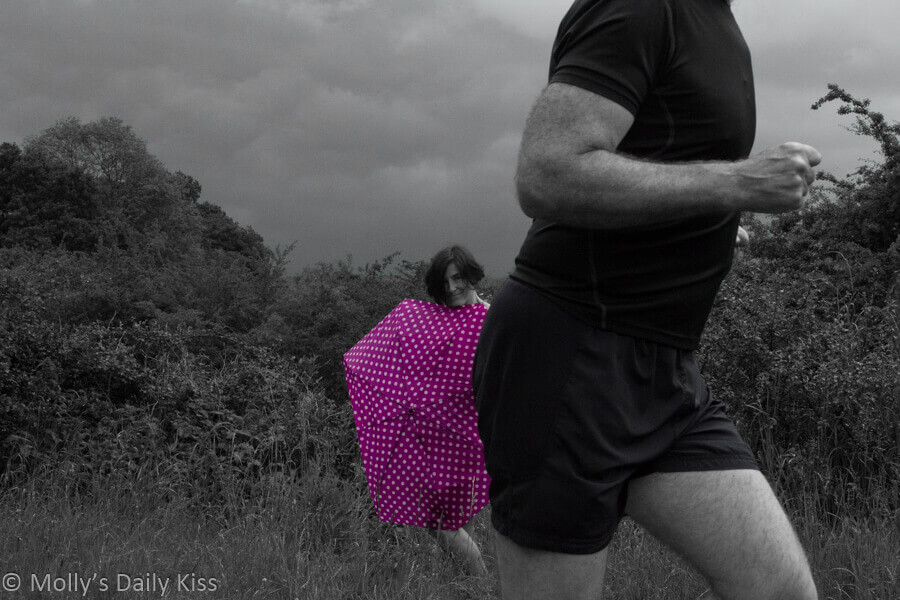 Confession; Usually when it comes to the Sinful Sunday prompts, despite knowing what they are months ahead, I work on my image for them in the same time frame as everyone else does but this one, Outtakes, I did because I had an image that has been sitting in my ‘to be used’ folder on my computer for a good for years now but I have just never quite known what to do with it. So I created a reason to use it.

And this is it’s story….

It had been raining, a lot, and I wanted to take a picture of me naked in the pouring rain under an umbrella. I set off on one of my regular routes. Of course the moment I got to the spot I wanted to use it stopped raining. However the sky was thick with dark clouds and so I thought I would give it a go anyway.

I set up my camera on the other side of the path and waded into the undergrowth on the other. I took a few practice shots with my clothes on. Once I was happy with those I double checked up and down the path that no one was coming, stripped off and started taking pictures. Some of those appear in this post: If you like Pina Colada’s

For once my timing was off and just beyond the bend at the end of the path had in fact been a runner and a fast one at that because one moment he was no one to be seen and the next I could hear his heavy footfall. There was no time for clothes by this point but luckily I did have a handy umbrella. The funniest thing about it all though is he never even looked in my direction but when I clicked the remote as he ran past he heard it and turned and looked at the camera but he never slowed his pace and he never looked over at me. Not quite the image I was going for but one that to this day makes me giggle every time I look at it.

A bit on the tired side

Haha, this is an awesome story and such a cool picture! I like how the look on your face is quite mischiveous!

A great story to your picture, would have made it quite awkward if he stop.

Btw is it me or does it look like he’s carrying a mushroom?

That is such a brilliant story and a fab photo. I am so pleased you created this weekend’s prompt to share it with us.

Very funny indeed. And the look on your face is fab xx

So funny! Love the twinkle in your eye 😉
This reminds me of the story you told of the old lady not noticing you were half naked and asking you whether you needed help!

Oh, fantastic! The photo and the story 😀

Hilarious! A fun image, and I love the insight into your process as well.
Indie

Love the edit on the photo and the mischievous look on your face!

You know he’s a serious runner when he’s that single minded! What a great story/image.

What he missed and never knew it — someone to take the pictures, instead of running through them.

Your story made me laugh and reminded me of my own self-absorbtion when running. I often barely miss stepping on snakes or running into pigs (a lady was walking one) because I’m all in my head and concentrating on surviving. LOL I’d like to think that I would notice a beautiful, naked woman in the woods. I will now keep my eyes open and hope.

Oh Molly, this made me giggle! As ever I’m in awe of your fearlessness, taking outside self portraits. The look on your face here is priceless and the edit is perfect.

A perfect image. Totally understandable and within your rights to create a theme so you could use it. Thanks for sharing!

What a great story! and I love the hot pink umbrella against the gray tones. This spring in Maine had been particularly damp and dreary, much as London is always portrayed to be. Thanks for the bright spot!

Impressive how oblivious people can be. I saw the tittle and the thumbnail for the photo and chuckled. Well timed photo in my opinion

Ah Molly, this is genius! Even purely accidentally, how could he miss you looking so fab?! I love the story here and would t it be funny if he saw this and remembered. Great shot! X

What a priceless pic! I wish I was that runner!

The photo made me smile (it’s your smile, and that cheerful umbrella) and then reading the story made me smile again. Well done! Love it.

I’ve heard the story but the image is so much better, you couldn’t have timed it better and the look on your face says so much! You’ve just brightened up my day!

Gahh! That jogger missed out! But also omfg my heart would be beating so fucking fast LOL