Such fun to play with 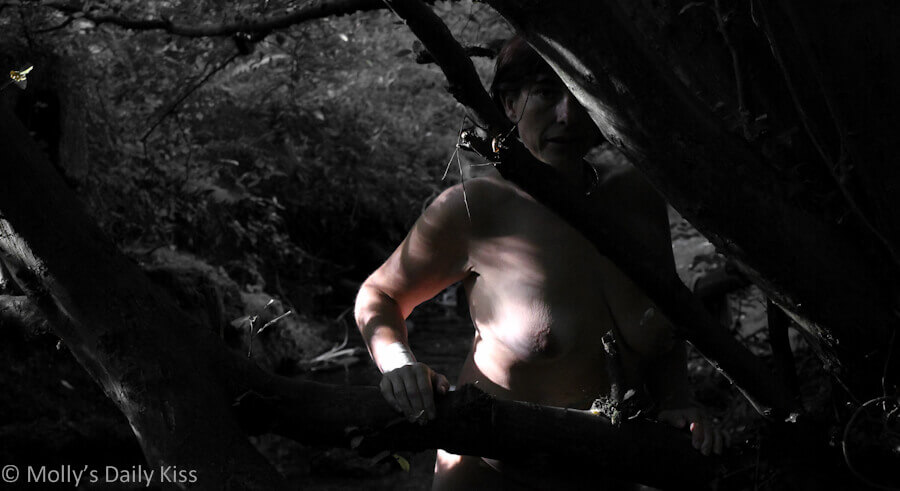 My bare feet sank into the soft woodland earth as he pushed from me his arms. My clothes were a heap at his feet where he had dropped them as he removed them piece by piece from me. The last of the sun cut low through the trees, it would be dark within the hour.

“Run” he said and then laughed as I just stood and looked at him.

“Run now” he repeated and this time I did. Dashing away from him down the path, at the bottom where it turned I paused and looked back. He still stood exactly where he was when I set off, arms crossed watching me. He grinned when he saw me look and as I turned to go out of the corner of my eye I saw him move and I knew the hunt was on.

My lack of clothes and bare feet put me at a distinct disadvantage, but like most hunts, the hunter had stacked the outcome in his favour and intended to consume his prey at the end of it, not let her vanish undetected into the undergrowth.

I ran on, sticking to the path as much as possible, trying to avoid the bramble and thorns that tore at my flesh when I strayed into the undergrowth. I was fairly sure I could hear him behind me, closing ground on me but I didn’t look back. I kept my eyes glued to the ground trying to avoid things that jabbed into the soles of my feet and slowed me down even more.

My heart raced in my chest and my breath caught in my throat as I dashed through the woods, the sun hung low in the sky and through the trees I could see the bright orange sky of a sunset. The path narrowed and the trees thickened. I knew from the rise of the ground that was at the back of the woodlands, where few people came and many of the paths were too overgrown to pass, but there was a gap in the trees and behind me. I was sure I could hear him so I took my chances and vanished into the thick dark foliage.

Of course it was a mistake, a trap even. Instead of being hunted I realised I had in fact been herded to this point. He had the rope already in the trees, and as I stepped from the one hand smothered my mouth and the other grabbed me round the waist and lifted me clean off the ground. I kicked my legs and twisted my body in his grasp but hunting makes a man determined and strong and he was not going to let me go. He bought down on the ground and straddled my chest and pinning my arms to my side. He worked quickly in the dying light secure first one and then the other leg to a tree so that I was spread open and wide. He stood then and watched for a moment as I pulled myself up and went to pulled at the ropes but it was just a tease to see me try, to give me hope and within moments he was pushing me back down and grabbing my wrists in his hands and binding them together and then staking them into the ground above my head.

As the last of the daylight light seemed to flicker out around us he light a small torch that was hanging in the tree by one of my feet. My whole bodied ached, from the run and the fight but also from the need, the desperate throbbing need that sat heavy in my cunt.

“I can smell you” he growled as he stood over me. “You smell ripe and ready my beautiful prey”

I moaned as the sound of his zipper and the rustle of his jeans filled the air.

“You are going to be such fun to play with” he mumbled as he positioned himself between my thighs.

It’s all in the wrist

Hot and dirty – thanks Molly – “desperate throbbing need that sat heavy in my cunt” – nice! – glad u feeling better x

Oooh, that is hot stuff.

Oh wow Molly this is hot AF! I read this imagining him as a vampire and well, teeth and *dies* !

OMG, this is so fucking good. Oh yes, this is the kind of “playing with” that I’m here for. UNF.

I love the playing part. Being chased is hot too.

This is a kind of hunt I really love!

Such an enjoyable fantasy. This had a great pace to it which matched the prey’s flight. Woodland bondage? Yes please!

Who wouldn’t hunt such a beautiful woman? x

This was hot AF! Loved the the portrayal of tension and expectation. I’m pretty sure a hunt like this would make me wet and willing to be captured too – yeah this was ace Molly – thank you.