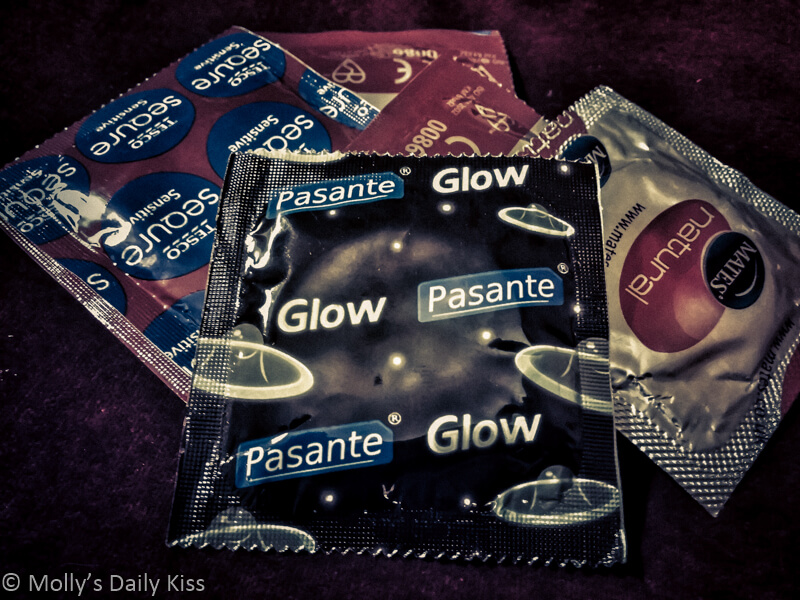 Condoms, French Letters, Johnny’s, Rubbers, Raincoat, Jimmy Hat, Love-glove, Sheath, there are a myriad of different names for them and they have been around in some form or other for thousands of years. In fact for much of human history they were the sole form of contraception. With the arrival of HIV/AIDS condoms suddenly took on a whole new level of importance and a product that had fallen out of fashion was now suddenly a must have item in the pursuit of safe sex and the condom industry boomed as a result. Today condoms come in so many different flavours, both literally and figuratively speaking. There are different sizes, textures, colours, material and even variations of shape design and of course you can now buy female condoms. In this day and age condoms are no longer just a contraceptive they are a life saver.

In a past life (my first marriage) condoms were our contraception. I dabbled with the pill and a cervical cap at one point but the former hugely disagreed with me and the latter was just fiddly, time-consuming and not conducive to spontaneity in the slightest. My husband at time was happy using condoms, I can’t fault him for that, but once we had two children in did become a bone of contention between us as he would not have a vasectomy. I wanted the freedom from risk of pregnancy that always haunted me. I had and still have absolutely no desire for any more children but I definitely had a desire (which seemed to be on the increase) for lots of filthy sexy sex.

Fast forward to now and things are very different. I am in a relationship which involves lots and lots of filthy kinky sexy sex and to top it off none of that sex involves any risk of getting pregnant. As I said in my piece about semen;

As far as I am concerned condoms are a wonderful thing. I constantly furnish my 16-year-old with them, to the extent that he has even said ‘For God sake Mum I have tons of them, stop giving them to me’ and when my daughter (who is currently 12) gets to an age where she might need them I will do exactly the same for her. I talk openly to both my children about sex, sexuality, bodies etc and that includes contraception. I want them, and have told them both, to have happy wonderful lovely sex lives, to enjoy their bodies both independently of others and with any partner they should happen to have. Contraception and especially safe sex contraception is a vital part of that when it comes to partnered sex.

So what of me and condoms; during my relationship with the gentleman who played a pivotal role in me discovering my sluttery and predilection for being sub we ventured out into the swinging world. Condoms were an absolute must. We never played with others without them and apart from on one occasions where one guy tried to fuck me without a condom (he regretted that stupid move I can tell you) everyone else we met and played with were all about the safe sex aspect; Condoms were the expected norm.

I don’t really like condoms, I know this is not very sex positive but for me they are a necessary thing in order to have safe sex. As far as I am concerned there is nothing inherently sexy about condoms, apart from the fact that they allow for sexy things to happen but in and of themselves they leave me cold. I was about to write that I never had a sexual experience where the condom was a turn on to me but then I realised that was not 100% accurate. It was a massive turn on putting one on @Domsigns so he could fuck another woman while I watched. However even then the actual condom was not the turn on but what it signified was; getting him ready to take another woman, being complicit in that, an active participant as well as a voyeur, was supremely fucking hot.

I know for some people they have fetishised the condom but I certainly have not. They are a wonderful thing, I would never dream of indulging in sexual activity with a partner I was not fluid bound with without one and I am grateful that I live in a culture and a country where they are widely available, but to me they are like seat belts for sex, you really need to use them to keep you safe while you enjoy the ride.

Born to be wild

To cheat or not to cheat

i love your seat belt comparison, i completely feel the same way…

Like you, I don’t particularly like condoms, but…
– in some cases they are necessary, I agree;
– I think it’s fucking hot that you put it on @DomSigns and watched him fuck another woman;
– you’re a damn cool mom to educate your kids the way you do!
– that piece about condoms in erotica is very valuable to all writers!

Thanks for sharing your thoughts.

I always hated thedamn things, but I was very fortunate to be a sexuall yactive 20 year old when girls were extremely liberal, they were all on the pill and condoms were hardly ever used.

Anyway, it was lovely at the time and today, Angie and I still enjoy condom free sex in our sixties. Today, though, 1 partner is enough for each of us in more than 1 sense!

Condoms are, sadly, now essential and the summers of love no more than a memory for us oldies.

I loved the range of condom related topics you covered here. It was fun and heartening to read. Thanks.