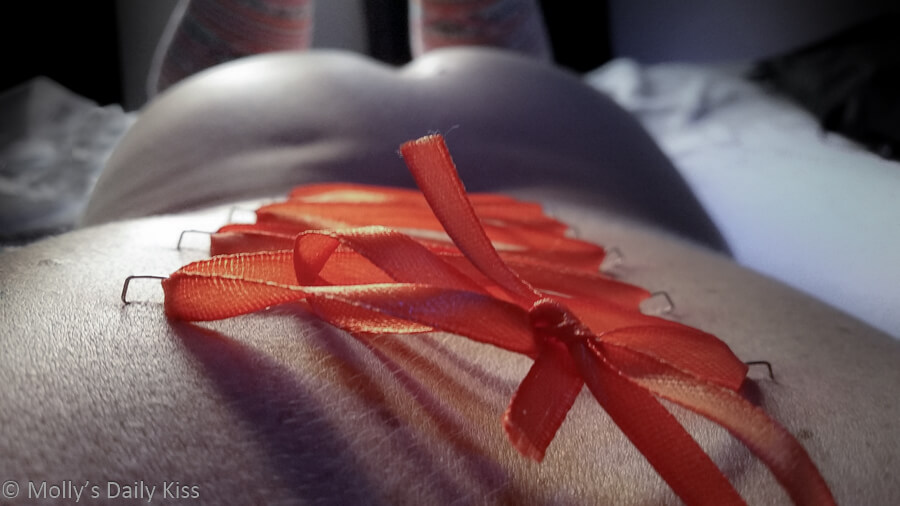 I have written about blood play a far bit, including for Kink of the Week but needle play and medical stapler are very new subjects. I first discovered that the idea of needle play was something I was open to when I saw these pictures on @iSluts_ blog. I sat for ages looking at them, marvelling at the patterns it left on her back and that seriously hot trickle of blood. Eventually I sent the link to @domsigns, saying nothing just dropping it into his Skype. He responded in kind, with silence, unless you count the knowing grin that is. I knew full well that one simple move had shifted needle play from the ‘don’t know/probably not’ list to; I (think) I want this, status. There is pretty much an identical story to go with staples but this time it was A to sub Bee who is to blame/thank.

This Christmas I bought him a medical stapler kit and he bought me (for him to use on me just to me clear) a needle play starter kit. Having pondered both of them extensively I was now suddenly faced with the reality that we were going to explore something very new to both of us. I was equally excited and terrified by the prospect.

This Sunday we went to one of our favourite events CM/nf (Clothed Male/naked female – more on that another time) He had made his intentions for the day very clear both on This D/s Life and to me privately. I was ready to experience something very new. On the way there he asked me how I was feeling about it. I told him I was excited but also nervous. The fear of the unknown playing demons in my mind continued once we got there and by the time he offered me his hand and led me upstairs to one of the private rooms reserved for needle type play I was fairly sure that I had made a big mistake. Not an uncommon reaction for me when faced with something new but laying on the bed while he cleaned my back with antiseptic wipes I could feel my body’s response to the fear really kicking in. Suddenly it really dawned on me, he was about to fire metal staples into the skin on my back, the urge to sit up and refuse to proceed was almost overwhelming but like so many things that have gone before some gentle soothing words from him and a reassuring hand on my arse helped me to quash that flight/fight reaction just enough to keep me breathing and focused.

The first one made my body jolt, not just from the sensation but the noise. I think by this stage I had worked myself up into such a state of heighten sensibilities that when it actually happened my body completely overreacted. By the second staple I had broken out into a cold sweat and was feeling slightly nauseous, which was deeply fucking annoying because the actual feeling of the staples going in was really rather intoxicating. The whole thing forced a short break to I could focus on getting the adrenaline rush under control. Did you know someone fingering you and whispering dirty thoughts into your ear works wonders?

After that the rest of the stables went in fairly quickly. They pinch like hell, a sharp sting that is over in an instant. He then set about threading them with ribbon which was a very strange sensation. I think my skin around the staples was hypersensitive at this point and the feeling of the ribbon dragging across it made me shiver and wince. Once he was done I asked him to take a picture so I could see, I am a very visual person and I have found that things which leave marks or visible signs of him on me are a big turn on for me. This was to be no exception in that regard. From this point on things a get a little hazy but I can tell you that room witnessed fingering and fucking and orgasms for both of us and when we returned down stairs to sit with our friends the staples where still firmly in place and I was now wearing the evidence of his orgasm across my tits and neck.

As the afternoon went on he would occasionally reach across and pull on the ribbon. Every time he did I could feel my nipples get hard and my cunt get wet. The skin on my back felt hot and tight but not uncomfortable so, just in this constant reminder way. When someone I had never spoken to before came up to me at the bar and said my back looked beautiful and she was envious I think I probably beamed with delight.

Taking the staples was playing on my mind though. Again, another unknown, playing tricks on me. The stapler comes with a remover tool that bends the staples into a kind of M shape so they can be removed easily. All sounds reasonable until your evil brain says, yes, but he is going to be pulling little piece of metal out of your skin! Cue that flight or fight response again. This time though, as I was pretty much floating around on a happy blissed out buzz my body didn’t go completely nuts. Taking them out is painful but a bit like putting them in, it is oh so fleeting, sharp little stabs combined with a strange pulling sensation. One of them left a tiny pinprick of blood but, much to the sadness of my blood kink, that was it. The skin on my back did feel deliciously sensitive and slightly prickly for the rest of the night but by the next day most of the evidence gone.

The moral of this story is never say never, 5 years ago I was fairly certain this would never be of interest to me is but now is most definitely on my list of things I am really looking forward to exploring a lot more. One of the things I love about kink and our D/s relationship is that we are constantly evolving, learning, experimenting, testing and exploring each other and ourselves. I had a feeling that this might work for us but it is not until you actually do it that you know for sure. I love that little prickle of fear that still fizzes in my head when I think about this play and I know that each click of the stapler and the way it makes me catch my breath and hiss through the pain totally does it for him; combined with the visual element, the chance for blood and the transgressive nature of having someone pierce your skin with metal staples puts this play firmly on the, let’s do that again again….and again, list.

I’m smiling so much reading this, I’m so glad you went ahead and experienced it, it really is such a delicious feeling isn’t it 😀

What an amazing post. I had medical staples put in my head after an injury when i was 18 and have been fascinated ever since. I had no idea you could buy a kit!
The photograph is incredible.
Thanks for sharing x x

Sir and I don’t do needles as I dislike them intensely, and Sir is needly phobic, and too much blood squicks me out, but I’m all kinds of fascinated by this post, and am now wondering if this could be a half way house, although I will admit the thought of them getting taken out does flip the ‘fuck, no thanks’ switch in my head.
But still, I’m torn. Fabulous image to go with the words, too x

Ohhhh I’m so envious! It sounds like an incredibly positive and exciting experience. The photograph is stunning. I guess taking staples out would be a bit like taking clamps off, huh? You forget that there’s an after part that’s also delightfully painful. I’m sure, too, that the sound of the stapler is much scarier than the actual action of being stapled! Does this mean that every time you use a regular stapler, you’re going to be turned on? Conditioning works in funny ways. 😉

this photograph is gorgeous, and the post beyonf compelling!!!

Wow! What a great description of stapling! I hope you guys get into needle-play! Be careful what you mark on your checklist! Ha!

Indeed, never say never and therefore I will not say that I will never do this. I am not ready to have needles in me, and doubt I ever will be, but the staples really intrigue me.

First of all let me tell you photograph is really awesome. Writing is very compelling. Good Luck for needles.

Gulp. I love the aesthetic. The feelings. And the description. Everything. Didn’t know abou stapling only about body piercing especially corset piercing. The images I love. Same with needle play. So yeah. Love it. Utterly turned on by the control and care DomSigns exhibited to you and your embrace. And then my mind goes. On me? You’re joking. Wish it wouldn’t tbh. But it creeps back. Can I imagine it ‘on me’ …. Maybe one day and maybe if it works for Beastly and that I also don’t know. We shall chat about it I think when he comes back from work away. Will probably asking him to read this 🙂 and like your dropping it into Dom Signs Skype.
Many thanks for sharing your experiences so wonderfully. Humbly. Twigs.

[…] Never say never again by Molly of Molly’s Daily Kiss – It’s not only how brave she is what I admire, but also the gorgeous image! […]