A Staple in my Life – A Guide to Medical Staple Play 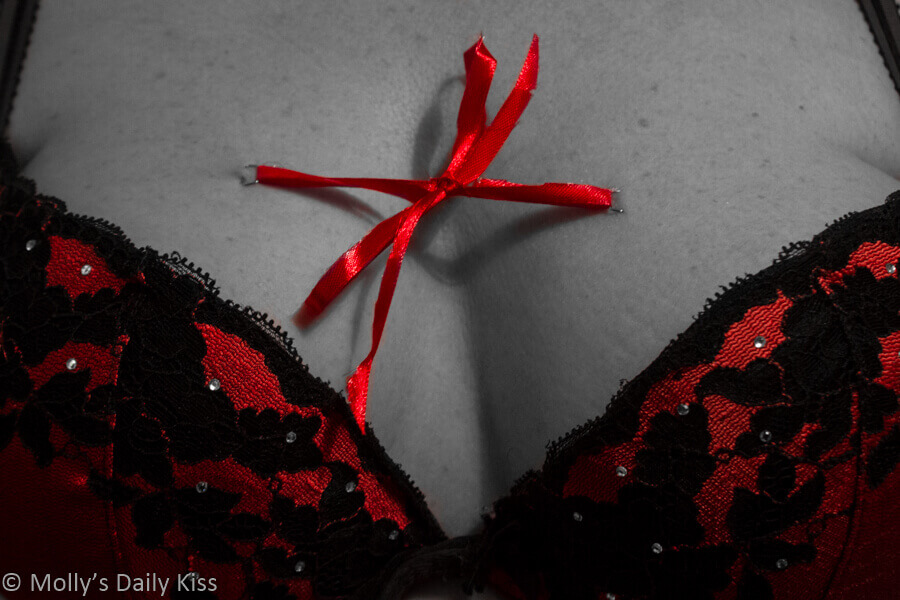 It was my idea. I bought him the medical staple kit as a Christmas present a few years back. It seemed like a good idea at the time but then when you are laying face down on a bed and someone is wiping your skin with a antiseptic wipe and asking you if you are ready, suddenly it feels like it was not such a good idea after all.

I loved all the pictures I had ever seen of staples, the pretty ribbon, the patterns, and of course maybe there was a potential for blood and I do love me some blood but those were pictures and this was reality and the reality was that I really had no idea what to expect. As a result my mind imagined the worst and before he even managed to get one staple in my I had broken out into a hot clammy sweat as my body flooded itself with Adrenalin as my fight or flight reaction kicked in in response to my sudden fear of what was to happen.

Obviously we got past that, mostly because he did one to show me it was OK and that allowed me to focus on that and calm myself down. The whole ended up being ridiculously hot as my body buzzed from the chemical reaction and I ended up on my knees in front of him sucking him off with the ribbon threaded through the staples decorating my back.

Do you use one of the staple guns that you use to pin things into the wall?

Absolutely definitely NEVER use one of those. They are designed to fire metal staples into a solid surface like a wall or piece of furniture. Your body is not like either of those things and using one of those is going at best hurt like hell and at worst do some serious damage. As well as that, unlike medical stapler, it is not sterilized and so not hygienic and puts you at risk of infection.

Where do you buy a Medical Stapler?

My advice is to start with a starter kit that gets you not only the Medical Stapler but also the removal tool (this is VERY important, more on that in a minute) but also gloves, wipes, and a sharps bin. This Medical Staple Kit by MedFet looks perfect. Ongoing you can then just replace the stapler when it runs out of staples.

So this is a bit of tricky one as how we experience different sensations and the line between sensation and pain is totally subjective but the answer for me is that sometimes I can barely feel it. Really, there have been times where I have asked him if he has even done one yet but other times it feel like a bit of a scratch and or a pinch and other times it is a much sharper pain that makes me suck in my breath. However even then it is fleeting. What makes it different? All sorts of things such as how up I am for it, how tired I am, where I am in my cycle but also different parts of the body. I find near my shoulder blades can be much more painful than say in my bicep where I can barely feel it.

How do you get the staples out?

You use the removal tool that comes with the kit and if you don’t buy a kit but just the stapler DO NOT USE IT if you don’t have the removal tool because your only options then are something VERY painful that might cause damage or to go to your Doctor or hospital to get them removed and that generally puts a dampener on the kinky fun part.

The removal tool has a flat bottom that you slide under the staple and then a centre blade that when it comes down causes the staple to fold in the middle which basically released the jaws from the skin. I will admit that I was pretty nervous that it was going to hurt like hell but actually it is fairly painless, at most it is a little scratch.

Don’t forget to dispose of the staples in a sharps bin and take that somewhere that can dispose of it. Often your local doctor or hospital will take them.

Does it make you bleed?

Again, like with sensation, this can vary from person to person and even time to time. Ones on my arms and thighs have never bleed but some of the ones on my back especially when I have had them in for a while (3+ hours at a kink club) there was some tiny bleeding when he removed them.It is definitely worth having some gauze or something handy just in case.

How do you prevent infection?

There is absolutely no guarantee that you can but you can definitely take sensible precautions to minimise the risk. Use antiseptic wipes to clean the skin before putting the staples in. Wear gloves when putting them in and taking them out. Dispose of staples safety and clean the skin again afterwards and of course keep and eye on the areas where you have done the staples and make sure they heal up properly. For me I find they are undetectable within 24hrs and sometimes there is no trace of them even by the next morning. Again it depends on how long I have had them in.

Where on the body can I do it?

That really is up to you but clearly I would avoid anything near the eyes and also be cautious in places where the skin is much thinner. I would avoid the inside of the wrists for example and anything where the bone is really close to the surface. The fleshier the better is the general rule, backs, buttocks, thighs, upper arms, chest and breasts are all ideal.

As the person who will be doing the stapling do you have any advice for me?

So I asked Michael this one and he said you should absolutely try it on yourself first. Being confident with the stapler will make it easier for you to administer it on your partner and also guide them through it the first time once you know what it feels like. Being nervous or unsure is only going to unnerve them and being tentative with the stapler is more likely to result in your not pressing it firmly enough against the skin result in the staple not penetrating the skin or doing it too shallowly.

Also remember to keep everything clean, have the removal tool, some wipes or gauze and the sharps bin nearby, wear gloves and enjoy making holes in your partner.

Does this help? Do you have any questions that I have not covered? If you do feel free to leave them in the comments below and I will add them to the post in due course. Happy stapling!

The Land of Faerie

Such a dirty little slut

Great guide, this is something we have been interested in but haven’t tried yet. I’ll have to put my big big pants on and have a go.

A good guide for people to give people information before they start on this. Thanks for sharing 🙂

Thank you so much for posting this. I’ve been intrigued by these ever since I first saw you post about a while back. You answered all of my questions!

Yay, I am so glad it was helpful

[…] you curious about medical staples? Molly Moore has written a guide to this kink: A Staple in my Life – A Guide to Medical Staple Play. Read this first before you try using the […]

This is a great post. Two years ago, Michael had your stapler out at Eroticon on the Saturday afternoon. Most people seemed a little leery, but Victoria Blisse just held out her arm and allowed him to demonstrate. It was enough to make me feel brave enough to try, and then, the wonders of a certain online deliverer meant one had arrived at home before I did…which took a little explaining, but Mr Hunt is nothing if not open minded when it comes to new toys. I would never have had the nerve to try this without your generosity in sharing information, both here and in person.

Yup, all of this *laughs* I’m so glad you decided to give it a go and enjoy it as much as I do.

Thank you so much for writing this. I have felt a bit scared of medical staples but I think it was the whole staple thought that put me off. The way you write it doesn’t sounds too different to needle play which I like. This is definitely something to put on my maybe list now that I have read your post so thank you for that. missy x

Well you have really encouraged me so I think we will give it a go sometimes. The idea of regular staples put me off. I will have to bookmark your post for encouragement though as I will chicken out again I am sure ?