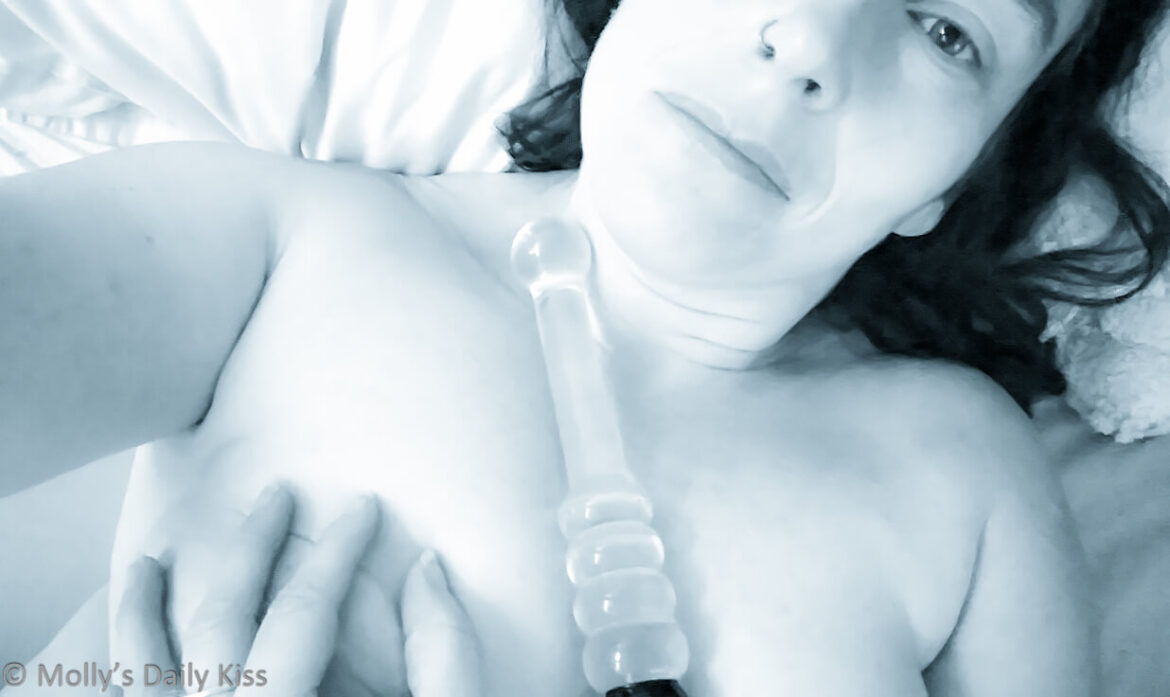 This year I decided I wanted to take part. I didn’t really have a specific reason or aim for the project but I just like the idea of something that would get me to focus on my physical pleasure and orgasms. It felt like a decadent special treat in some ways.

On top of that there is also something about asking all the time that eventually turns me off. I think it is a hold over to my previous relationship where I was also the instigator of sex and was quite often rejected too. That gradually took its toll on me until I got to a place where I mostly stopped making advances and just took care of myself. I was most definitely a dedicated and regular wanker. However that means that asking for sex/orgasms is something that can actually kill the mood for me and if there is any risk or hint that I might get a knock back (told no in murrican)  then I absolutely won’t ask because that feeling is just fucking awful for me and leaves me feeling angry and sad.

This is also not something  new. We have talked about this a lot and he has really worked with me to try to break down these thoughts I have around this subject as a result I have slowly got better at asking to masturbate but #30dayorgasmfun has reminded me just how much I love a wank nearly every day. Having an orgasm in the morning really is the best way for me to start my day. It kind of invigorates me and makes me feel like getting up and getting on with my day. That can be either solo or partnered orgasms. I am most definitely a morning sex person.

Over the course of the month I have not done it every day. Sometimes life just gets in the way and I find that if I don’t do it in the morning then by bedtime I am tired and no longer really in the mood so tend to skip it. I have also really enjoyed using my collection of dildos more often. I don’t really know why but I had not really using them much at all but this has reignited my love for them, especially all the beautiful glass ones I have. I also fucking love coming on his fingers. He really does know exactly how to touch me and it always feels so good. When he reaches over for me in the mornings and his hand pushes between my legs I am always a very happy and obliging Molly.

Courage of your convictions

Fascinating post Molly. I find it very intriguing the many ways we can talk ourselves in and out of things. Humans are very odd creatures. But I’m pleased the #30DayOrgasm fun worked for you! and more than a little jealous of your sex life too…
Indie xx

I found that life got in the way a bit – tiredness and the occasional stress factor. Great post btw x

I completely relate to that feeling of “asking too much.” A year or more ago, I had to have a similar conversation with JB about masturbation…it was getting too much to only try new sex toys when he was available — our libidos just don’t always match up, and I felt bothersome constantly asking — it became a source of stress. He gave me permission to masturbate as often as I need/want to — within certain parameters. Having those boundaries gives me all the subby feels and feeling the freedom to wank away at will has been good for me on a different level.

I’m glad you didn’t let your head win on this one (though I understand how it can happen) and that you’ve reconnected with a part of yourself. XOXO