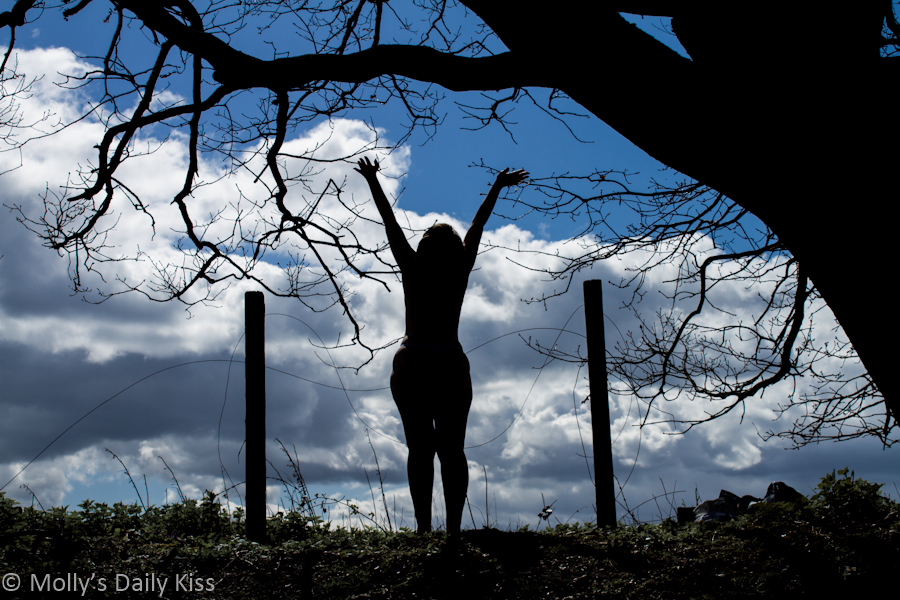 A couple of months ago I finally managed to get out into the countryside and photograph my wonderful friend @HopeAlways2 She had asked me on a number of occasions to take her picture but for a variety of reasons, mainly time and me being disorganised it had yet to happen. However some lovely spring weather during April saw us both with free time and so off we went with a few ideas, some rope, outfits and a flask of hot tea to one of my favourite photography locations.

For me this experience was very special. When we arrived and first started taking pictures in the Bluebells I could tell that @hopealways was nervous, not of me but of the whole situation however with words of encouragement and a few giggles she slowly but surely started to relax and by the time we took the picture of her reaching up to the sunshine on the bank I had a feeling that she was finally enjoying herself. Seeing her like that, relaxed, confident and happy with what she was doing made me smile but it wasn’t until about a week a later when she posted a piece of writing on Fetlife that I truly grasped just how much the experience had really meant to her. The piece she wrote made me proud to have been part of that day with her and also made me feel quite emotional that unbeknownst to me at the time I had helped her see herself in a new, wonderful, positive way.

Her words are powerful, moving and honest and I think there will be many women and maybe some men too? Who identify with what she has written in some form or other and so I asked her if I could share her piece here, along with some of the pictures I took on that day and she has kindly agreed.

When is a Photograph more than just a photo ?

I posted a few new pictures about a week ago and have been meaning to write this journal entry ever since. Those of you that know me well enough may have some idea of how difficult and time-consuming I find it. However I received a private message that has prompted me to put fingers to key pad.

I have in the past asked Molly to take some photos for me, and she in return has complemented me on a costume or outfit and suggested we take a photo of it. However this never came about for one reason or another. Either the timing was not right, one or indeed both of us were busy with other things.

But truth be told, I was not ready. Not ready to face the stark truth “The camera never lies.” I had already convinced myself of what I was going to see, even if it was based on years of negativity drip fed to me over time. I have spent the last year confronting one fear or stark truth or another. I have taken them on and faced them one at a time, and each time was a little easier than the last.

So this time I was ready. I was ready to see and face it head on. I was helped and spurred on by the fact that I had watched and listened to Molly over the last few years talk about her passion for photography. Her determination in capturing the true beauty of things whether it is an everyday object or nature in her many forms and seasonal splendour.

I have also heard her thoughts on more than one occasion on the evil that is photo shopping of photos, to the extent of what is now mostly perceived as the ideal body by a high percentage of the population. An Ideal without flaws and imperfections of any kind, an ideal an even higher percentage of the population has no chance what so ever in achieving. So you see I knew without a doubt that I could trust Molly to show me the truth of me.

That moment of truth came after we had taken the shots of me nearly naked on the tree. We were chatting away and I was faffing about getting my jeans back on when I looked over her shoulder as she scanned the photos she had just taken. I think my response was WOW! Is that me???? 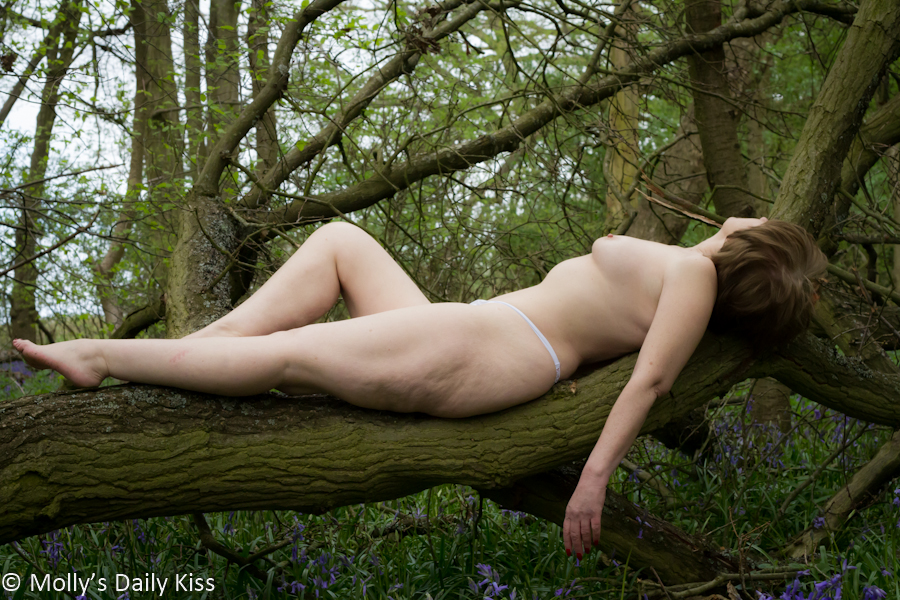 It wasn’t until we were taking the photos on the bank against the sun that the full impact of that WOW hit me. I am not sure whether it was the giggle of the cyclist that had just gone by, or the sun on my face, or just the realisation that YES it was me and I had liked what I had seen. It was my moment of truth.

This is the photo that has captured not just the real me but that moment in time when I reached up and let go of all the negativity that had built up over the years. Never again would I listen to anyone who would try to tell me different, because I had finally seen the truth. It was a very special moment that will stay with me always. Thank you so much Molly. It was indeed an incredibly freeing and a most joyous moment. It has and will continue to affect me in ways I never knew was possible, it has changed me, whether for the better, who knows. I think so, but time will tell.

That is the Magic of Molly and her camera. She told me, and most of all she showed me the truth. That is when and why a photograph is more than it seems on the surface.

I am sure Molly has a whole different perspective on the day two friends went for a walk in the woods. She has said that she may do a write-up on her blog at some point. If and when she does I will post a link here for those of you who are interested.

For all those of you out there who feel the same as I did, or who would like to dispel any doubts, if you are close/near enough, go have a chat with Molly ( Username in Fetlife: Pussy ) or at her blog about your own shoot. Set yourself free, it is one of the best gifts you can give yourself.…….. 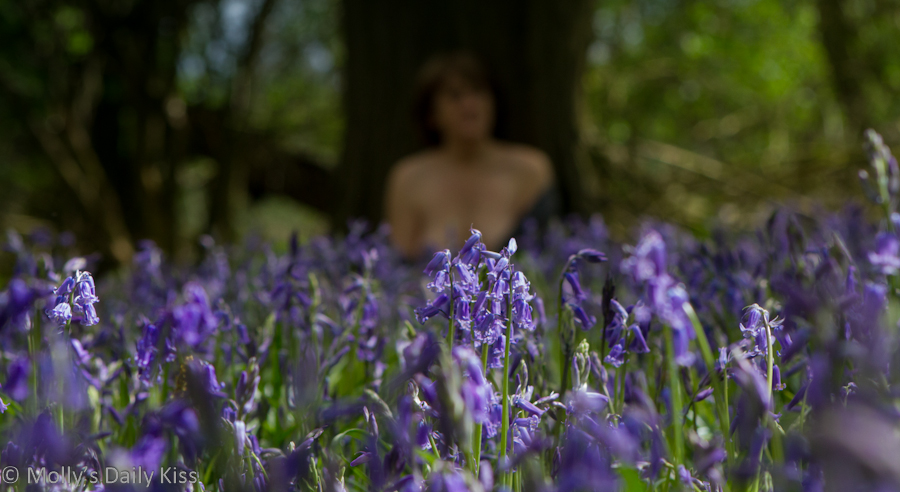 I am the fire

Revelation is a beautiful thing and that is what this is a revelation of self – and maybe also an epiphany!

What a beautiful story! You are truly changing the world Molly, with every photo shoot, and every post. These images are fabulous & the fact that you included your friend’s writing makes it even more moving.
xxPenny

Superb photos and story.
Your images show a beautiful woman in a natural setting. I am glad that you have helped remove some of her doubts about herself.

This is such an incredibly beautiful post – the introductory words by Molly, but also that of HopeAlways2 telling about seeing the beauty of herself. That’s wonderful! And the photos are really beautiful. the middle one showing the fun and the top one showing a beautiful, real woman!

I have read this post through tears. It is a deeply moving and beautiful post. I hope the good feelings that you both have from this carry on.

This is truly wonderful! Thanks for sharing, Molly and thanks to HopeAlways2 for letting us see this awakening. Completely moving and inspiring. Thank you!

Superb photos and story.
Your images show a beautiful woman in a natural setting. I am glad that you have helped remove some of her doubts about herself.

Such a beautiful post. Many of us never get to that place of accepting who we are and letting go of the negativity that we let accumulated over the years. Very happy for your friend and love the way you captured her beauty.

This is such a delightful post on so many levels. Bravo to @HopeAlways2 for having the courage to pose and be beautiful, and bravo to Molly for taking such lovely images of a gorgeous woman. And then there is the writing of both to read and enjoy and celebrate 🙂 x

Photos are amazing. It’s always to see everyday women’s bodies photoed minus the phototshop and other enhancements.