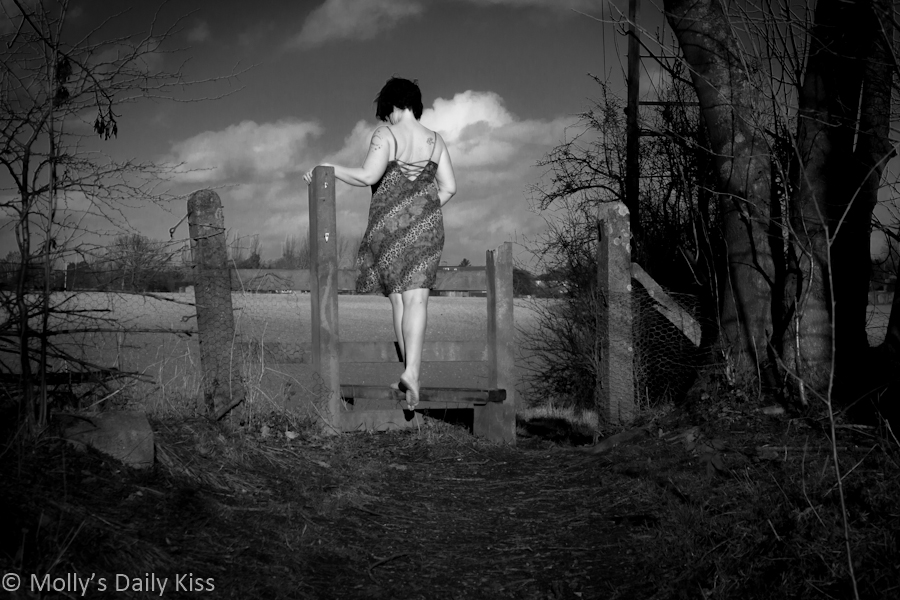 As a general rule I tend to leave most of my images as close to ‘out of the camera’ as I can. In other words I do very little editing to them. I sometimes tweak the clarity, lighting and luminance to reduce any noise in the image that I don’t like but apart from that they are pretty much exactly as they came out of the camera. Sometimes an image will lend itself to more and I will play around with the colours, muting some out and keeping others in to create a final look or highlight an aspect of the image that I like. However I never edit me, I’ve never airbrushed my skin or altered my shape in any way. For me it is important that my images are as an honest account of me and my body as possible.

Black and white is a medium I use from time to time. In fact I often play around with my images and try them out in black and white but most of the time I end up returning at least some of the colour to them. I think the fact that I take many of my images outdoors means that when I try to remove the colour I often feel that rather than adding something to image it has actually taken something away. The richness of the natural colours in the outdoors are instantly lost but every now and then the black and white works and when it works I think it makes a really good image 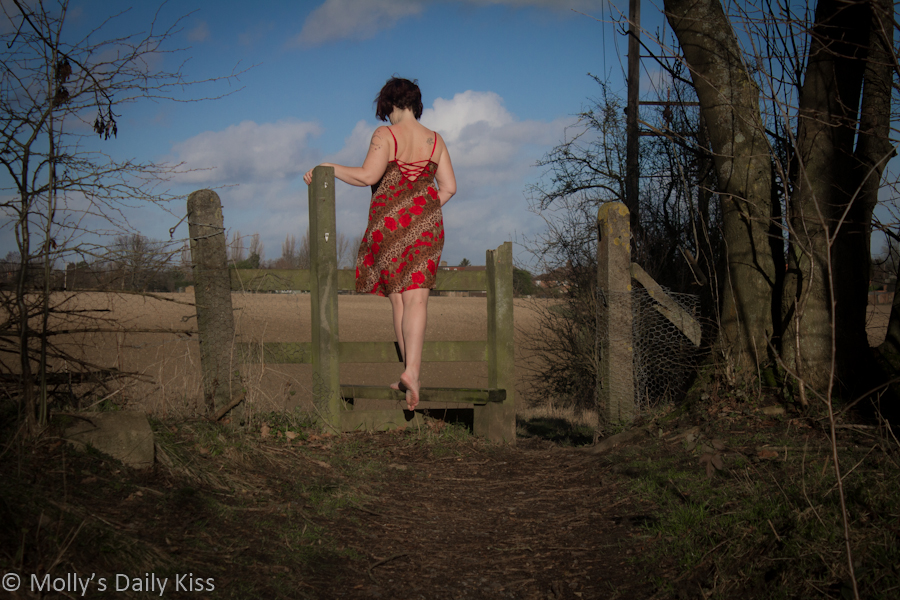 and turns it into something more

What do you think?

A Postcard from Brighton

I love B&W as it focuses the eye on the textures more than the colour. Like you, sometimes adding to images can relegate their impact.

I think I’ve said it before I’m a sucker for a black & white photo. At first I felt a western/country/southern sort of feel to it, then looking at the black & white I had a feeling of “Wizard of Oz”…Kansas, when Dorothy is headed home before the storm hits, wind blowing…always great stuff Molly.

I’m with SassyCat – Kansas and ‘Wizard of Oz’ describes the black and white image perfectly!

I love this picture. Your skin stands out so beautifully compared to the darker foliage around, and it seems to be reflected in the clouds.

I prefer the b&w here as you, the subject, leap out from the image. You are little lost in the colour spectrum of the first shot.

I love your color images, but for this photo I definitely prefer the black and white, it really makes your body & the clouds pop. I love the scenery & your graceful pose; gorgeous shot!
xxPenny

My favorite is also the black & white, although I almost always prefer t see you in color. In the B&W your body seems highlighted, which is really nice.

I agree with the others. I have to find you in the colour but in the b&w, you stand out and look as if you are stepping into another world with the clouds. Beautiful pictures.

I’ve always been an admirer of your work Molly and your images.

I love the B&W version it gives you drama and a dark sensuality. I also like the way it adds definition to your figure and highlights the skin tone.

The movement of your dress, flowing, matches the swirling feel of the central circular shape to this photo. It’s maximised so much in the black and white version that at first I thought you’d applied another effect to make the swirl more pronounced. But in fact the eye is drawn to the central figure, you – and the circular shape is almost a mystical gateway of it’s own. we’re left wondering what adventures await you over the stile.
Love this

I think yes, in this case it works very well as it shows the sunlight to good effect and so highlights your image.

I love this pic. I’m actually partial to the color one, as the lovely dress with its red tones are contrasted against the rustic brown earth hues and the blue sky. Gorgeous.

I can’t decide! I love the striking colour if the dress in the first image but I love how you become the focus in the B&W. They’re both equally gorgeous.

It’s only a small detail, I know, but I love that you’re barefoot here. It’s close, but I *think* I prefer the b/w photo – your hair really stands out in it, for one thing.

Both of these are magnificent, but it’s a great choice for this prompt because you wouldn’t think B/W would make that big a difference, but actually the B/W makes your skin really luminous. Gorgeous.

Nice shot- well done! I would ove to see a third version in which the girl is in color against the black and white.

i love them both for different reasons

Wow, the black and white makes this come to life for me. It creates a different atmosphere, like a storm is coming which is a lovely contrast against the soft flow of your dress. I also love that you are barefoot, overall just a fabulous image.

I love this! As many have noted, you really glow in the black and white version. I also feel that, with your bare feet and the breeze blowing your hair and dress, you are rushing to a liaison at a remote cottage or some other trysting spot.

I love the black and white. It feels like you are wondering around in search of something before the storm rolls in.

I’ve just made a similar comment on Penny’s photos 🙂 I prefer the colour for exactly the reason you outline, the B/W drains nature photos of their definition. I also think the natural colours look almost ethereal, as Nature often does 😉 Stunning photo, btw 🙂 x

I can’t decide. I love the color of the sky and the contrast of your skin in the color one but there is a crispness and a very alluring vintage feel to the B&W version.

I’m torn – I love the vividness of the colors, but the clouds in the black and white are truly spectacular.