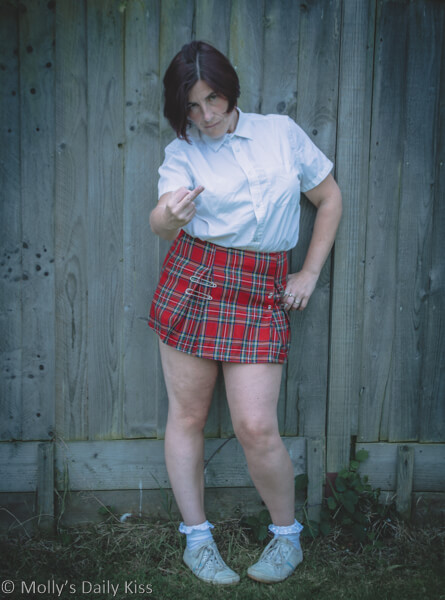 This week Kitten (Michael’s girlfriend) has been writing about tasks as part of her NaNo project. As a result task related conversations in our house have been popular. Some of those conversations have been between the three of us and some of them just Michael and I. This morning I lay in bed and read the first two posts Cara had written The task of tasks and Splish Splash. As per usual, because she is a brilliant writer, they are both excellent. She manages to make tasks sound sexy and erotic, she captures just how they can work for the people involved; feeding her submission and his dominance, and they made me feel sad.

I find tasks mainly disappointing, sometimes annoying and they often leave me with feelings of failure. I wrote a post about that here Equal to the Task, in which I said

The worst tasks for me are the ones where there is no completion. I find those very frustrating. You can’t ever tick them off as being done, they are just never-ending and even if I start off enjoying them the moment the novelty wears off they become boring to me and potentially frustrating too because you can’t ever reach a goal.

Those kinds of tasks, daily rituals or achievements just don’t work for me. I need to have flexibility in my life. Asking me to do an hour’s uninterrupted writing every day sounds like something that would be great for me but the truth is that type of rigid expectation on my time will only serve to eventually irritate and frustrate me and there is nothing sexy about that. It might help me achieve a goal in the short-term but in the long-term I will only start to resent it.

And about short/one off tasks

Short individual tasks can be different though. If it is something I can do and achieve then that will tap into the sense of satisfaction I get from completing something. Finishing things are very important to me. I think it is why I like writing short stories and have always struggled with longer bodies of work. I need to complete things to be motivated to carry on, things that have no end, become boring very quickly.

This week during our conversations he has encouraged me to join in when they have been talking and Cara even asked me for ideas to help with her writing. Unlike with other subjects on this one I found myself just muttering something about not being very good at tasks. Which is true, I am not, but reading Cara’s posts momentarily made me wish I was. She makes them sound not only sexy, but also comforting and nurturing and I love comforting and nurturing.

I find talking about tasks difficult because it is one area where I find myself really questioning my submission. He tried to pointing out to me that I do, do tasks but what he described to me didn’t feel like tasks they felt like rules.

“Do not leave you hair brush on the bed”

“Do not wipe your glasses on your jumper; clean them properly how I have shown you”

The first is because it drove him potty and the second is for my own good because otherwise I scratch my lenses but neither of them feels like a task to me. They are rules with consequences if broken. The hairbrush one I seem to have mastered now although it took long enough and the glasses one, well I am trying but I keep forgetting myself, old habits die hard (and with a sore bottom) I guess. I get why these rules exist, yes they have and do frustrate me at times but only when I break them and then my frustration is with me not with the rules. Despite the fact that I have been heard to mutter “I hate this fucking hair brush rule sometimes” the truth is that what I hated was the consequence and the fact that I had forgotten yet again.

So rules, I can in my own way manage them as long as I don’t deem them to be pointless or ridiculous. A rule for rules sake would be a waste of both our times because it would only cause friction and the same if there were numerous rules for me to remember/master.

Tasks on the other hand still seem to be something I struggle with and yet reading Cara’s pieces made me want to be able to do them. She comes across as so calm and serene in her submission in that writing and, for a moment, I wanted to be that submissive. It is after all the idealised version to be tranquil and accepting of ‘your place’ and yet I am not that and I don’t think I ever could be. Don’t get me wrong, he is not keeping me here against my will, far from it, I love being the s to his D but my s comes with a fight. I am wilful, feisty, impatient and combative. I need him to be powerful, strong, decisive, patient and calm to balance me out and to give me a safe place to give up control.

But I have digressed slightly for the task. Haha, sorry I couldn’t resist it. This morning when I was feeling sad he asked me what was up and I did my best to explain finishing off with something along the lines of, and I wish I was more sub, a better sub. He paused and then said to me,

“Yes you are difficult, you don’t take well to tasks, instructions, orders or punishments. As you said yourself, you need to be made to do it. You are not willing to let go on your own, not just anyone can make you submit, you like to be made to submit and so tasks, which you suck at, even if they are for you own good don’t work for you because a repetitive tasks bores you and singular tasks rub you the wrong way, they instantly put your back up because your default is to be defiant.

I say something is good for you, you argue and say no and fight me tooth and nail, I impose my will, you give in, then later on I say how’s that working out and you reluctantly admit I was right. This is the story of our WHOLE relationship!

You are a challenge and I love a damn good challenge.”

By the end of it I was not longer sad, in fact I was giggling because he knows me so well, because I am so lucky I found a man who has enough balls and maybe most importantly all of the patience to take on my particular brand of submission and because I realised Cara’s posts shouldn’t make me sad but happy because she is not me and I am not her and that is a thing to be celebrated.

This is fabulous Molly. I struggle with tasks, and often feel disappointed in myself that I am forgetful and cant/dont complete them or am I not really “sub enough” so it is great to read a point of view similar to my own. Will be sharing this with my Sir….and yes I feel he will nod knowingly because I eventually agree they are for my good too!

Just minutes before I read this I had commented on Cara’s post about Cleaning glasses. This was so interesting to read and I really understand your personality because of i am similar. It takes a lot for me to submit – and I am mainly too feisty or argumentative. – But sometimes that just makes the joy of submission greater. x

This post show so clearly how no two subs are the same. We are all individuals who like different things and have different things that work for us. The fact that you don’t like tasks doesn’t mean you are less of a sub than Cara. It just means you are unique in your own way. I love what Michael as said to you 🙂

On a lot of levels I agree with you…certain “tasks” will eventually suck my time and I’ll be frustrated for me. Certain things that might look or sound like tasks are really rituals – it’s what I do on a regular basis but it’s within the scope of my day. No set time or even set amount of time. It’s funny how we can look at the same kind of thing and reframe it in different ways based on what works for us. 🙂

This is so much me too, I am rubbish at tasks and worse at following rules. I want to want to do them and to like them, but I just don’t. Often I forget, or else I just don’t want to do whatever it is. I too challenge whether I am submissive at all, but know I am and he tells me I am. Just not a sub who is good at tasks and rules. Off to read Cara’s blog now 🙂

Fascinating read. I had to smile at the hairbrush and glasses part. That is so me… Thanks Molly x

[…] adore them and I wish we lived closer (I’m half-tempted to move to the UK one day). In Tooth and Nail, Molly shares her experiences and thoughts on tasks and rules – what works for them and what […]