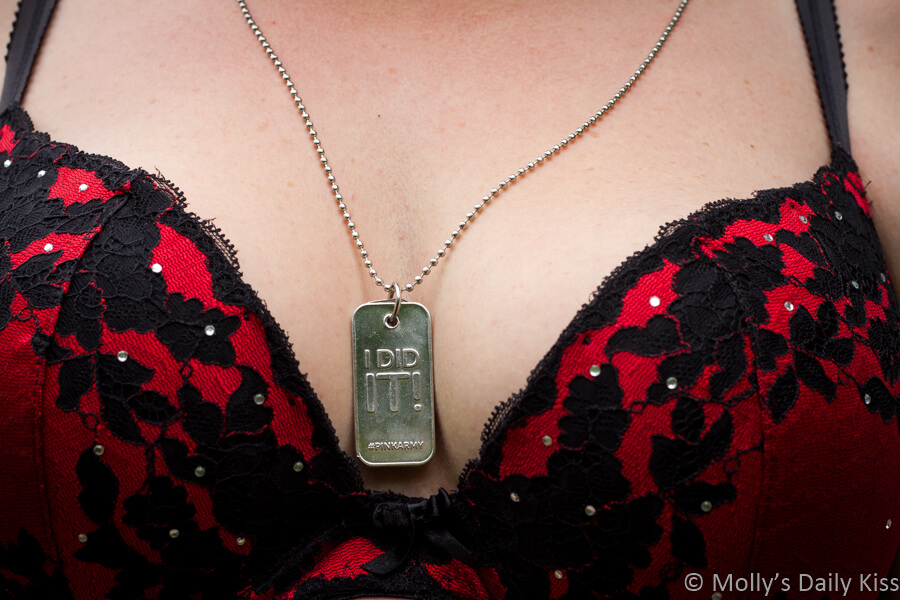 Last Sunday I did something I have never ever done before. I ran a race. No big deal really and yet for me it kind of was.

At school I was the chubby short girl. I was shy, quiet, bookish and nervous and I didn’t, as far I knew, have a sporting bone in my body. I hated PE and went to great length to find ways to get out of out. The whole thing was just utterly traumatic to me. It always brought me into direct contact with the girls who were bullying me and to this day I have yet to decide if the teacher was woefully ignorant of what was happening in her class or actually a bully herself. At the time, it certainly felt like she also had it in for me. She would regularly call on me to answer questions and even demonstrate things to the class that she must have known I couldn’t do and thereby providing yet more public humiliation. Her name was Miss Girling and I loathed her. I left school with the knowledge that physical pursuits where not for me, that I was too heavy, too slow, lacked skill and the competitive nature required to play any kind of sport. The only exercise I took was walking places and sometimes I would go for a swim. Through my 20’s I go slowly bigger and bigger, not helped by putting on weight through both my pregnancies until one day in my early 30’s I woke up and saw a hugely overweight person in the mirror.

That might sound a bit insane but it really was that jarring. I knew I was getting bigger and bigger but I kept telling myself it was just the way I was and that I didn’t really care until that day when I did. I took me nearly 3 years to lose the best part of 7stone (that is nearly 100lb) and I did it by cutting down on everything I ate, drinking more fluids, and walking the dog we had got miles and miles every single day. On average 4 miles a day. I went from a (UK) size 20 to a size 8. Since then I have pretty much managed to keep my weight under control although I have put on weight in the last couple of years I am still a size 10/12 but I often think about getting another dog because it seems that walking really did the trick for me but in a bid to help replace the dog I joined a gym. To say I was apprehensive about it would be an understatement but with much support and encouragement from Michael I went off I faced my worries about being too old, too unfit, etc and found that in fact the reality was I was none of those things. Yes there are people there who are super fit and young but there are also people there who are much older, or bigger, or less able-bodied than I am. After nearly 18 months of working out, including running on the treadmill I have gone from walking 4 miles in just over an hour to being able to run 5 miles in just under an hour. I know it’s not fast but for that chubby girl at school who hated her body when it came to exercise it was an amazingly powerful thing.

When my daughter asked to do the 5k Race for Life I nervously agreed. She so wanted to do it,  but somewhere inside me that unhappy school girl was lurking and the thought of doing an actual race rather than just doing what I feel like at the gym made me really doubt myself. However I entered us both anyway and kept on doing my weekly runs in the hope that I could transfer some of that new-found running ability to this task. I can’t say I did any specific training, just kept my pace up at the gym and took it easy the week before the race. I set myself the task of making it round in under 45 minutes with the idea that if I made it in 40 minutes I would be really pleased with myself. On the day we set off for the venue and I will happily admit that Michael was right in his post, I really was fucking nervous but once the race started I just concentrated on putting one foot in front of the other, my usual slow but steady pace, which I kept up for the whole 5K and to my absolute pride and delight I crossed the finishing line in 38.57. 38.57 see those numbers? Not only did I finish the race but I did it in under 40 minutes. I am 44, by no means slim and by no means a runner but sheer grit and determination makes up for a lot and I finally ran a race and that evil Miss Girling can shove her contemptuous smirk up her arse.

On the Other Hand

On a Summer’s Day

I am so damn proud of you, miss. This is awesome! XX-Jade, AKA Gym Domme 😉 MUAH!

I couldn’t have done it without with my Gym Domme!

This makes me so happy! Very inspiring.
I hope Miss Girling met a suitably horrible end.

Oh me too, she was a repellent woman

This narrative made me smile huge for you and gave me a burning “fuck you” sensation in my chest for your childhood bullies.

38.57 is an amazing feat indeed! Congratulations!!!

Thank you, I must admit I felt the same. Maybe I should have been able to move on by now but some things are hard to shake off, so I guess I ran them off instead.

Congratulations both for your race but much more for your determinación to show that if you want you can no matters what others may say.
I also have to thank you for this inspiring post and your whole blog which is keeping me company in my personal fight.I find you quite close person through your lines and I can sense you are a beautiful woman in the inside the outside is easy to see ;).thank you so much.

Thank you very much and what a lovely comment this is. I am so glad you are enjoying my work

Well done to both of you. You did something amazing for a wonderful cause and proved to yourself that you could do it too xx

Thanks…I did feel a huge sense of achievement afterwards

What the hell is it with gym teachers anyway? They turn more people off basic athletic skills, which helps no one.

Every time I have a good run, I flip off a nasty specimen of humanity that was my grade 8 gym teacher.

I think you are right, they are so rigid in what they define as sport and exercise, rather than trying to find out where kids talents and enjoyment is.

This is *so* true. I remember someone telling me about their daughter going to prvate school and sucking at hockey, and basket ball, and all the other popular things, but the school kept going with options til she discovered cross country running, and she excelled at that… I could have been a competitive swimmer, but I grew up in Ireland in the 80s and there were no pools (there’s one at the bottom of the school road now, arg!), so instead I skulked around the edges, ‘forgetting my gym gear’ and feeling shit about myself for years.
Imagine if we’d been doing yoga or Pilates since age 12? We’d be superwomen.

Yes! Exactly this, I wish they were introduced to a much broader range of things. PE should not just be about sport but about fitness and exercise too. Not everyone is cut out for sport but everyone has a form of exercise that is legitimate and they can enjoy

Hurrah, Molly!
SO Proud of you!
I played four sports a year or more until highschool, but I was still bullied. I was a sturdy tough girl, fully command of my space as a goalie in a hockey game, but never petite or cute for the cheerleading/dance teams crowd. I rarely dated, and practically never in high school. My crowd of friends were mostly male, but I wasn’t a romantic interest, but “one of the guys” talking about cars or sports. I wasn’t a gifted player outside of hockey and football, but I loved playing. So, I have and will always carry a great deal of muscle in my legs and chest/back.

The only thing I love about my physique are my legs (heels are grand), and my eyes, perhaps my lips. My brain is the best of all. I read your Significant others post as well and you are truly blessed to have him as part of your cheerleading section. Good for all of you.

On running. The other reason I cheer you on is because I can only run to save my life, or that of someone else,. I have rheumatoid arthritis, and osteo arthritis from all the sports. These days, my favorite exercise is swimming because there’s no pain involved, and I love hiking. These days it’s with my trusty walking stick in hand.
What an achievement!
Cheers!

Your Dog Tag says it all… I’ll bet this will not be the last race you run. As Mick would say “Satisfaction!”

i feel so happy and proud for you, you beautiful woman!!!

Congrats on competing! I was never much of a runner until I was older. Running the first 5K was huge for me. You are to be commended for doing it and doing it well.

And that bra is gorgeous!

Molly, what a marvelous achievement! You are truly an inspiration. Thank you so much for posting this.

With love and admiration,

Congratulations! I too, struggle with weight and unless I walk 5 or times a week, I seem to crave more food. I lost 50 pounds over the course of a year and need about 30 more to be where I want to be.

Keep up the good fight. and kudos to you overcoming the damage a thoughtless and incompetent teacher inflicted upon you years ago.

Thank you and well done you, that is some impressive weight loss

What a wonderful achievement for you!

Two fingers up to Miss Girling! ?

Great job Molly! I need to follow your lead.

You are awesome! And I love the picture

Molly! Congratulations! You are a superwoman and an inspiration. I have run 5ks in the past and your post has encouraged me to get back to training for one this fall. Also, what a fantastic inspiration for your daughter and what a cool thing that you could do together. I just love everything about this post!

I just had a ‘HOW THE BLOODY FUCKING HELL DID I MISS THIS?’ moment and then looked at the date and realised it was posted when I was in Uganda. THANK GOD for elust judging and seeing it now!! Obviously I love everything about this! So proud of you. Xxxxx