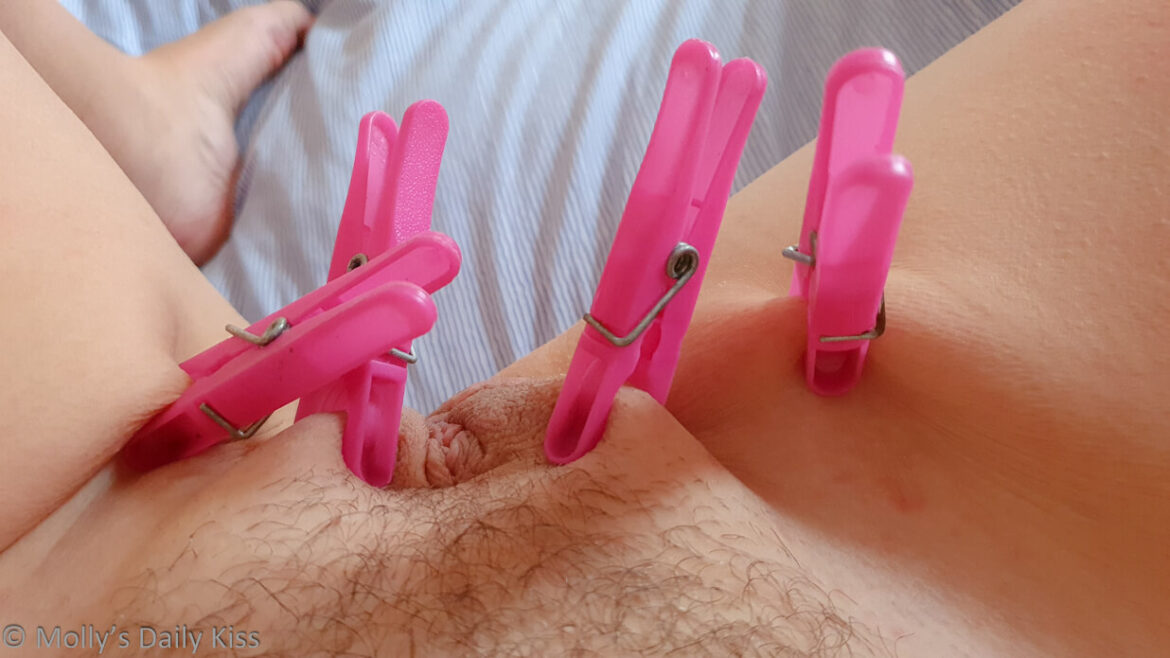 “I have been thinking about clothes pins”

“Oh, I didn’t know laundry was something that you spent time thinking about”

“Funny! No, I have been thinking about how I am going to use clothes pins on you.”

“There are so many delicious possibilities but one that I am going to do next time I see you is pin them on along the inside of your thighs and then go down on you. I want to see your reaction every time I flick them with my fingers and how hard you come when I knock them off just as your orgasm starts”

My response was basically a noise that could best be described as unnnfff and whilst the conversation did carry on for a bit like lots of these things he didn’t say much else but that seed of a thought had been well and truly planted in my mind and over the next couple of weeks I found myself thinking about it a LOT.

I am not without experience when it comes to clothes pegs (as we call them in the UK). Michael used to like to pin them along my arms while I worked, or on one notable occasion while we were driving to a kink event. He slowly removed them as we got closer to the venue so that by the time we got there my arms were red and sore. It was not the worse way to start off an outing for sure.

I have written about pegs before too and in that post I talked about how the putting on is the easy bit. There is a slight pinch, a tightening of the skin, but it’s rarely unbearable and if it is that is usually because it has not grabbed enough of the skin and is basically clamping down on a tiny pinch of skin However taking them off, now that is another story altogether…

“By the time they are removed your skin is sore, red, hot and over-sensitive and the part of it that has been firmly clamped tight in the grip of the peg is white and pale as the pressure has forced the blood out of the tissue and into the surrounding area. When the pegs come off, all that changes, and quickly. The blood rushes back into place, filling the sensitive skin with even more heat and as a result the tissue beneath the surface throbs whilst the skin on the outside stings with relief at finally being free.” The Only Type Of Pegging Sir Likes

It is an intense sensation, especially as sometimes the peg is almost a tiny bit stuck to the skin and requires a little pull to be dislodged which only adds to the rush. It is one of those things that I soon learned was like a sticking plaster, fast and decisive is way better than slow. Fast creates that sharp spike of pain that almost instantly starts to subside but is then replaced with the throb and ache and heat as your body forces blood back into the tissue.

But I have never had clothes pegs on the inside of my thighs and yet after he mentioned it I couldn’t get the thought from my mind. I found myself laying in bed at night wanking off to the idea; Him pushing my thighs apart, holding first one and then the other in his tight grip as he secured the pegs on my delicate flesh, his eyes on my face watching my reaction, smiling that wicked smile when the pain made me hiss. Would he already be hard now or would that only happen when I was squirming beneath the heat of his mouth as his fingers pushed into my cunt?

I played it over and over but I kept also thinking what if it was too much? What if I was safewording after the first peg? After all my thighs are probably not as tough as my forearms. There seemed only way to find out.

I am not very good at self administering pain. I have tried in the past spanking myself with things but I am too tentative and it just doesn’t give me that kick in the same way it does when someone else does it. But I have used nipple clamps in the past so why not clothes pegs. Turns out I can definitely do that. I did discover though that my thighs are actually fairly muscular and firm and so getting the pegs on required them to be pretty high up on my thighs which immediately led me to wondering what they would feel like on my labia. Just like the thighs there was one obvious way to find out. The answer was that they feel pretty intense but in the good clit throbbing way and I would be lying if I didn’t admit that I came really quickly and hard that day.

I never told him I was going to do it. He found out afterwards when I sent him the picture. The one you are getting to see now. His response was something similar to mine when he first mentioned it to me; A sound rather than coherent words. It’s been a couple of months now since he first mentioned it and I experimented on my own and quite frankly I seem to have developed a bit of thing for using clothes pegs on myself because since them I have tried them on my boobs and on my clit. Both turned out to be pretty good although the clit one, well that one turned out to be fairly mind blowing but more on that soon because I have pictures to share for February Photofest of that little game.

Prick me the right way

A Roll in the Hay

No one puts baby in a corner

[…] Clothespins. I noticed this was a topic prompt on a lot of the sex/BDSM blogs. Those blog posts were what prompted this blog post. There is something about clothespins. Yes, they are very helpful with hanging wet clothing on a clothesline to dry (does anyone do that anymore?). They also work very well for closing a bag of potato chips. But after being introduced to them as a sex toy, that’s my first thought when I see a picture or reference to clothespins. Such a simple little device, but it can created such strong feelings of arousal. Pinning them on to nipples or labia, especially at the direction of another person is so highly erotic to me. Some people say they are less painful than nipple clamps, but I actually find clothespins much more painful. But they are much more versatile than nipple clamps and maybe that’s part of the appeal. If you would like to read what others have said about this tiny little torture device, click on these links: https://violetfawkes.com/2020/01/19/i-fucking-love-clothespins/ https://deviantsuccubus.com/2020/01/clothespins-and-pain-play/ https://mollysdailykiss.com/2020/01/22/clothes-pegs/ […]

I love the feeling of legs pinching my flesh, and have a date with myself and some pegs for my KOTW post ?
Love your image. It’s unnnfffff

I also love the feeling of the pegs on my skin and have a love hate relationship with them as they come off. Got a post in mind for this and can’t wait to see Marie’s….

Like you say, I’ve found pegs great for getting someone to self-administer pain. Thanks for this insight into the other ways you enjoy them!

Oooh, I think my interest has been pinched I mean pegged I mean piqued!

Ooo, that is a very hot idea. I have never experimented with clothespins, but I did play with chip clips. I think I want to try them on my labia, as that sounds fun. Thank you for sharing!