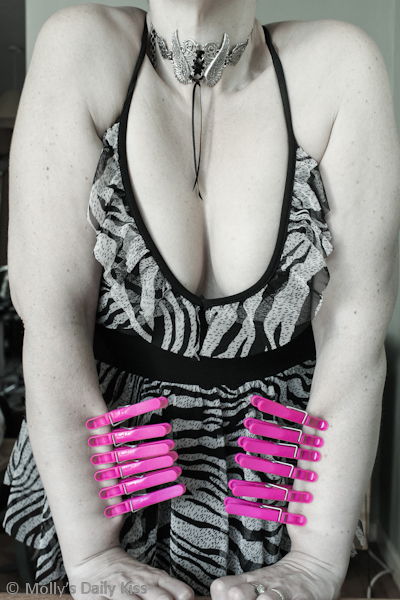 It has been a while since we have played with clothes pegs (or pins for my Murrican readers) I don’t really know why that is, it is just one of those things that seemed to have slipped from our play. I suspect some of the reason is that we both absolutely thrive on the heavy impact play and on those occasions when I permitted to make a request my current cravings for wax and knife play mean I nearly always suggest something that involves one or both of them. This week though there were no requests but there were suggestions but they didn’t come from me they came from Jade’s Kink of the Week. 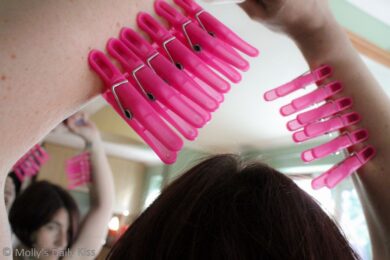 We have had the pink pegs for a while now but this was the first time we had used them. As he pulled my skin up into a little ridge along my forearm I felt a shiver of apprehension run through. It had been so long I had forgotten, suddenly it was like the first time all over again, and I wasn’t sure quite what to expect. At first it was just a tightness, pulling and tugging on the skin, which was intensified if I raised my arms up but unlike the screw clamps or the nipple sticks, pegs have a constant unforgiving force about them. Not only do they firmly hold on but they seem to tighten their grip, slowly increasing the pressure until the skin starts to sting and throb, filling the area with heat until eventually you start to feel like the pegs might actually be on fire and by this stage every single movement you make excites all those squashed little nerve endings over and over again. 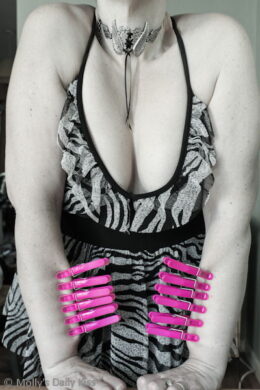 If you have never played with pegs then you might not be aware of the fact that putting them on is the easy bit. It is just a little tweak in comparison to taking them off. By the time they are removed your skin is sore, red, hot and over-sensitive and the part of it that has been firmly clamped tight in the grip of the peg is white and pale as the pressure has forced the blood out of the tissue and into the surrounding area. When the pegs come off, all that changes, and quickly. The blood rushes back into place, filling the sensitive skin with even more heat and as a result the tissue beneath the surface throbs whilst the skin on the outside stings with relief at finally being free. 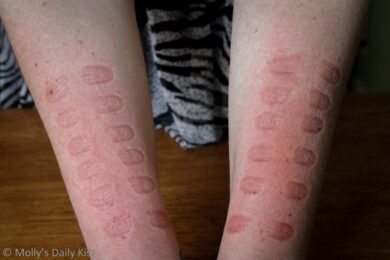 I will admit I had forgotten about the joys of pegs, the focused sensation that slowly grows and builds until it fills your mind and is all you can think about. Then, when they are eventually removed, maybe for me, the best bit, the marks on my skin. Being marked is a massive kink for me and these pretty pink pegs delivered that in bucket loads, if you look carefully you can see that where the pegs have been moulded there is small circular raised patch that left beautiful little pinpricks inside each pinch mark and to my absolute delight the marks are very slow to fade, still being visible on my skin quite a few hours later and beneath those marks, if I trace my fingers over them I can feel the icing on the cake that has yet to truly show itself; bruising 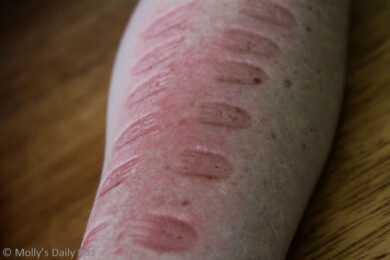 I feel like I should be thanking jade this week, in fact, that is exactly what I am doing as she has reminded me just how much I enjoy clothes pegs and I have a strong feeling that after today they will be making a far more regular appearance in our explorations.

You can see another image from this series on my Sinful Sunday post this week; Tender

The Sky Is Falling

I have not tried it, but I am curious. And the pictures certainly contribute to visualizing what you describe, so thank you for that.

Excellent, excellent marks. I’d not thought to put them anywhere by the breasts/genitalia, but I will be going for forearms/thighs now to try the zipper 🙂
Wish I could find pretty pink ones like yours!

That first photo is utterly gorgeous, and your description of how they feel is so spot on.

This piece, along with coming across a Sinful Sunday photo from February, when I covered with my breasts with pegs, and being told to put one on my tongue (possibly one of my favourite places to be “pegged”) has set quite a yearning in me too. So thank you Jade, and thank you Molly!

Is it wrong that I really love the picture with the marks?
Clothespins = yes.
Marks = LOVE

I love them too, and agree that it’s the taking off part that is the hardest!

Also…what lovely marks they make. 😀 I hope they show up in our play a bit more often too.

How odd that Sir has never placed them on my arms! 😀 I’ve had them on my breasts and pussy, and had the lot rubber-banded to my thighs. Your description of how they feel was SPOT ON. I got shivers just reading it. Talk about the synchronicity of the universe, I asked Sir just last night if we could play with them again soon. Now I have some inspiration for him. xoxo

Looking at your photos, I know I have to find some plastic pegs. Those leave much nicer marks than the wooden ones 🙂

[…] number of posts is any indication, you all love your clothespins (as do I.) And as Molly of Molly’s Daily Kiss said, hopefully all those yummy pictures and discussions will inspire lots […]