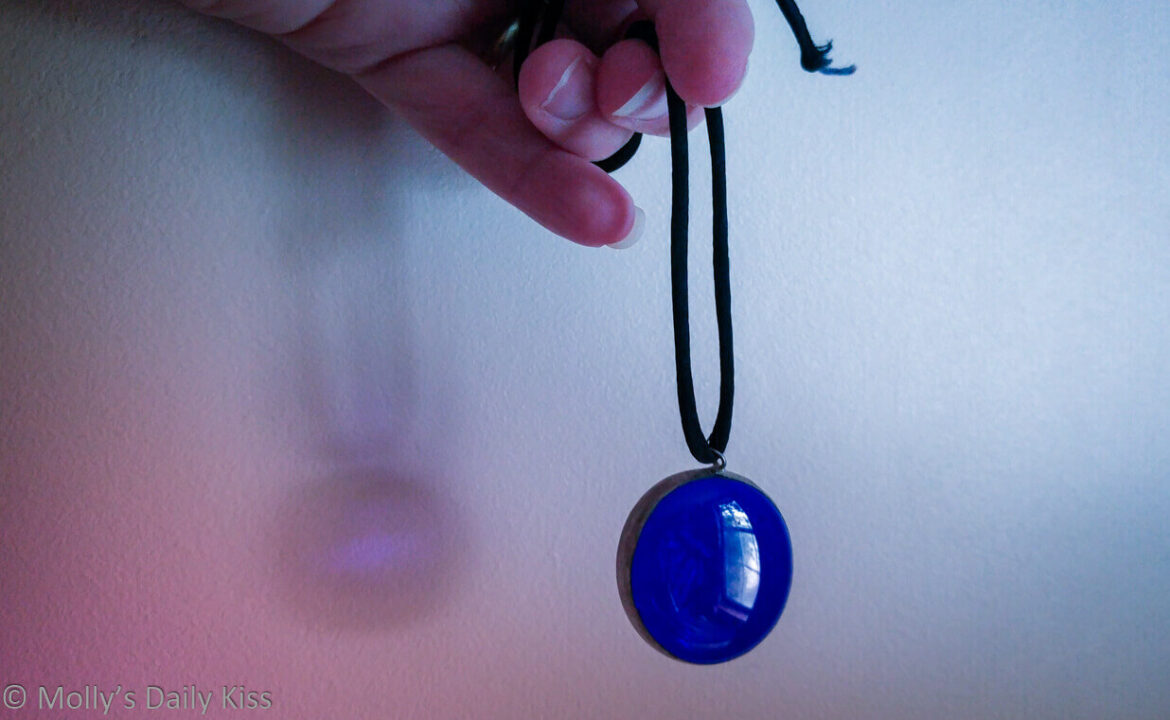 “I bet you I can hypnotize one of you”

The men had gradually gravitated to her as the evening had worn on. She was chatty and pretty, they slowly fluttered closer and closer, like moths to a flame, her enticing giggle, and slightly too loud sing song voice capturing their attention. They bought her drinks, she played pool badly with them, giggling at her terrible shots and letting them lean over her and correct the way she held her cue, and now here they were all gathered around her at the bar again.

“What, and make us dance like a chicken or something?” asked the guy with the shaved head and rose tattoo on his arm.

“Yeah right” said one of the really young guys, “All that stuff is made up bullshit, everyone knows that”

“No it’s not. It is totally true and I bet you $50 I can do to someone in this bar.” she challenged

“And if you can’t do it what do we get in return?”

She sat and thought for a moment. Surveying the group of men surrounding her

“What? Me?” said the guy sitting right next to her

“Yes you, and you and you… all of you.” She pointed round the group counting. “All 10 of you, one at a time of course”

“Fucking hell” mutter the guy behind the bar “Are you for real?”

“Totally real, look” and she reached out and tapped the back of hand with her pretty pink finger nails. “So come on then, who wants to bet me. $50 says I can hypnotise someone in this bar and if I lose I will suck you off? I get to pick the person though” She glanced around at her new man friends letting her eyes linger on each one as if she was appraising them for the task at hand

“$50! But I don’t want no fucking blow job. I don’t swing that way but it will be funny to see you slacked jawed after dealing with this lot” The men all looked round at the tall red head that had just placed her money on the bar in front of their girl. Moments ago she had been sitting quietly at the other end of the bar on her own nursing a bottle beer and now here she was putting down 50 bucks in front of them. “And you boys are idiots if you don’t get out your bucks out because I can tell you that this is a guaranteed win. I went to a hypnotist, he said he could cure me of smoking. What a crock of shit that was. I paid a fortune for his hokum and smoked just as many cigarettes after as I did before.”

There was a momentary pause as the men around her absorbed her words and then they were all riffling through their pockets digging out a variety of dollar bills and adding them to the pile that the red head had started. When they had all finally found their money the guy with the rose tattoo offered himself as the volunteer.

“Oh no, not you, I get to pick”, she declared and again looked round at the assembled group.

“No fucking way. And why the fuck would you pick me when I already told you that shit doesn’t work on me”

“Because I know I can do it, because whoever the guy was you went to didn’t know what he was doing and because I will enjoy showing you how wrong you are”

“Oh you will, will you. Come on then Miss Confident, do me. And you boys best get ready to get your dicks sucked by this bitch”

“I am not a bitch but if it makes you feel better calling me that then so be it. Now, sit down here” she said as she grabbed one of the chairs from the tables.

“OK” sighed the redhead. “What is your damn name Miss Confident”

“It’s Diana but everyone calls me Dizzy and you?”

“Right then Clara, you need to just follow my lead and relax into and I promise I will look after you”

The group of men edged closer as Dizzy pulled the necklace she was wearing over the blond curls on her head and held the blue glass pendant up in front of the redheads face.

“Damn you is pretty a thing” murmured Dizzy as she lent in close to Clara. “And you smell good too. What about me, do I smell good?”

Clara leaned forward and draw in a deep breath. “You smell good” she replied in a soft voice.

“A collective woooahhhh” from the male watchers filled the air around the ladies as they continued to make out. Sitting in a chair next to her, Dizzy whispered words into Clara’s ears and then spread her legs just enough so that the redhead could reach up under her skirt. She spoke so quietly into her ear that the men watching couldn’t quite make out what she was saying but they didn’t really care, they were spellbound by the unexpected girl on girl scene that was playing out in front of them. Dizzy didn’t need to look to know that they were all desperately adjusting their pants around their growing hard ons The thought made her smile to herself. Men, so predictable, she thought.

Clara’s fingers felt good between her legs, rubbing her clit and then pushing into her cunt and for a moment Dizzy thought about carrying on until she came but then decided against it. No point in pushing her luck too far and so she extracted the redeads hands from under her skirt dipped her fingers into the glass of water on the table and flicked a few droplets into Clara’s face

“What the fuck is wrong with you” she responded as the water splattered across her glowing red cheeks.

The men all took a step back as she jumped up from her chair. “What are you all you looking at? Did she do something to me?

“Do you do something to me?” she turned on spiting the words out at her

“She hypnotised you and you kissed her and well, you touched her” said the young man “You know, like dykes” A couple of the men chuckled in response.

“Fuck you” hissed Clara and she stormed over to the bar, grabbed her coat, and headed for the door.

“I didn’t agree to that” she shouted as walked out the door.

Dizzy looked up him. “Sorry darlin’ I am exhausted now and you know, she shook me up a bit. I didn’t expect her to be that cross. You know what though. How about tomorrow night instead? I am staying with sister down at Shelby Lake so I can stop by tomorrow and you can buy me a drink and I will, you know, do you then” and she gave him a little wink as she finished the sentence.

“Sure” he replied. “I like the sound of that”

They offered to buy her another drink, seemingly forgetting that most of them had just given her all their money but she refused, told them she had a headache and left. Out in the car park she slide into the driver’s seat of her car and pulled out onto the road. After a few hundred yards she pulled over.

“You took your time” said Clara as she slide into the passenger seat. “It’s not exactly summer out here you know.”

“Yeah sorry”, said Dizzy, “one of them wanted their own go.”

“Fucking men” muttered Clara, “They are all so stupid. So how much did we make tonight?”

And both woman laughed as they sped off into the night towards the next destination on their cross country tour.

Here to be consumed

Thanks for the entertainment!

Oh this is brilliant, Molly! I absolutely love the twist at the end!

Love it! I didn’t quite know what to expect just like the men in the story but the ending was a great twist.

Ha! Brilliant – love the way you played this – and of course, I do love a twist 😉 x

Such a brilliant twist, fantastic! I love how I felt like one of the viewers, unsure until the reveal, brilliantly done!

[…] Spellbound by Molly Moore Molly had me wondering how I was going to be able to like these characters at first, especially with what appeared to be a lack of consent about halfway through. But then I read on and went, “…OH. Of course!” This was a sexy story with a cheeky ending that left me grinning. […]

Heehee, great scam – I saw that ending coming but then I have a naturally suspicious mind! Nicely done xx

I’d like to nominate Miss Scarlet’s blog http://www.missscarletwrites.com/ A great blog full of insight and honesty (and photos!)