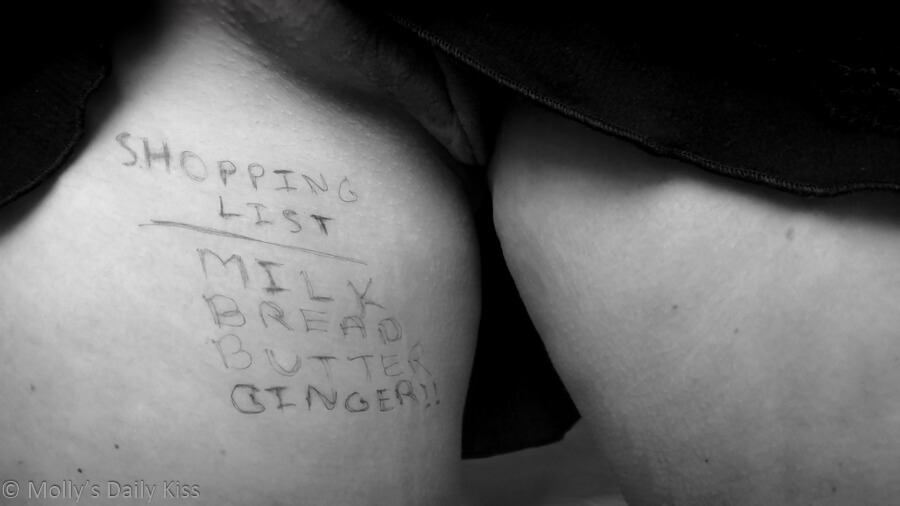 When I wrote the prompt for Kink of the Week, Writing on Skin, I very nearly ended up writing my whole post on the subject but just in case you have not read that here is what I wrote.

In 2012 I was honoured to be selected to read some of my work at The Festival for the Erotic Arts in Edinburgh. Michael and I had a fabulous weekend enjoying both the beautiful city of Edinburgh and all the different events that were part of the festival. Why I am telling you this? Well, it was there that my kink for being written/drawn on was born and all because of Tabitha Rayne. She was also reading her work at the event and I can remember sitting in the audience listening to her beautiful voice as she read her story and once she had finished leaning over to Michael and whispering into his ear, I think you should write on me. When I asked Tabitha about that story recently she kindly posted it in full, to her blog, so I could reference in this post. So I will wait to carry on with this introduction whilst you go and read it. The Scribe by Tabitha Rayne

I have written on myself. When we were long distance I did it a few times and sent him pictures of me with his name written on my thighs or above my cunt but apart from that we have not really dabbled in it that much. Part of me wonders if the idea of it is maybe hotter than the actuality of it but until we explore it a bit more I can’t know for sure. I do know that the thought of laying naked while he pens his thoughts onto my skin makes me twitch and the idea of walking around with his words adorning my flesh beneath my clothes is as a hot as hell. It’s that whole sexy secret thing. I just look like a women, like every other women at the shops or parents evening, or out for dinner, or at a meeting but how many of those other women’s skin is decorated with delicious lusty scripts? Can they tell by my smile I have a secret, did my skirt just ride up enough to give someone a glimpse? And at the end of the day when I get home and take off my clothes there it is, desire, written large on my flesh, which unlike his cum, has not been rubbed off by my clothes and will only vanish from my skin when I, or he, decided it is time to wipe the canvas clean.

Note ~ I wrote this piece a few days ago and asked him to proof read it. The image was all his idea. On this occasions it was purely for the photo but I have a feeling that won’t be the case in the future.

I will have you too

A lot of it for me is all about a different way of him marking me and as you know I am a Marks slut ;-p