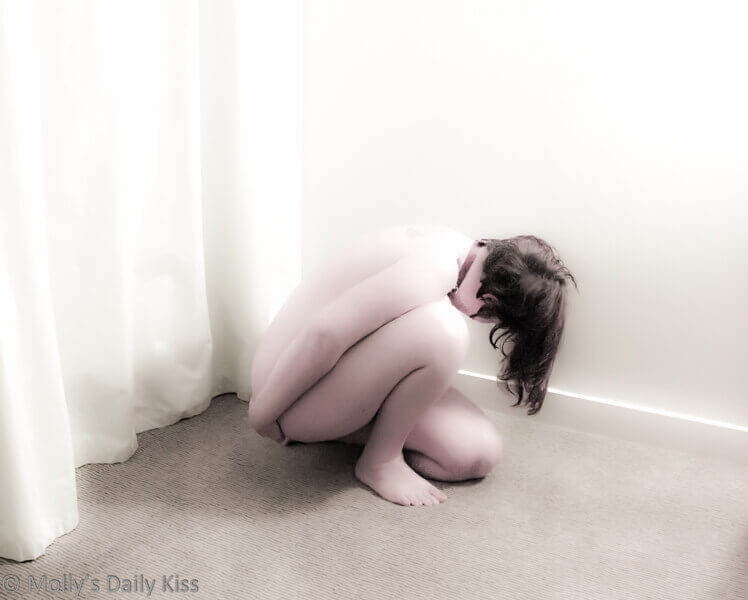 Twelve Days Between Kisses by Pieces of Jade ~ “He calls this structure that he has imposed upon me keeping or putting me in my “box.” We both love it, this box. I want to be in this box all the time, even when I act out like I don’t. Even when I push back or resist, or need his reinforcement of the walls of my box.

Recently, he has been reinforcing the box a lot. He’s been drawing it tighter around me, demanding more focus, more attention, more submission. I never thought I would be someone that wanted someone else to govern me in quite this way. I thrived in the kind of sexual domination that W exerted over me, and I loved feeling safe in my role as his submissive, knowing I had given myself over to someone that would always, always do right by me, but I think, as I look back – even in some of my earlier writings – that I longed for more.

That I needed more.

Viper has recognized that need in me all along. He has pointed it out many times; noted how it has calmed me, noted how this structure and his reinforcing of it quiets the squirrels in my head, although, until recently, he hasn’t always been that proactive about it. It is only recently that he has decided to use the tenets of our relationship as a tool in modifying and reshaping my behavior, as well.”

Since I read this piece last week by Jade the idea of his rules and structure being a box around me has been occupying my mind. It is an analogy that I rather like and yet the phrase ‘being put in my box’ irks me. I guess it sounds a bit like being ‘put in my place’ and that immediately makes me want to push back against it.

Last week we had a falling out. Not really an argument more a disagreement.

In the morning he had told me to go open the curtains so I could see my book properly. Rather than do I was told I cast the book to one side and declared I wouldn’t bother reading right now. At the time he commented on whether the words I had used and my tone were appropriate and I had mumbled a vague sorry in reply. We went about our day and I admit I thought nothing more of it.

That evening my some miracle both kids went out at the same time. When he realised we were alone he asked me to fetch the wooden spoon as he wanted to ‘deal with my behaviour from this morning’. Again rather than doing as I was told I railed against it, complaining that it was not fair, that I hadn’t really done anything wrong, that I didn’t want the horrible spoon, that I wanted a ‘nice spanking’. It was definitely not me at my finest submissive hour that is for sure. He attempted to talk to me about it, trying to point out that this was part of what we had negotiated to which I snapped back

“I know that. Just do it then”

Things just got worse from there really. I think we both said things that were upsetting to each other and in the end I retreated to the bedroom and had a good cry. Now I will say at this point that it was the day before my period started and so there was definitely a hormone factor at play. I am pretty sure that is why I was so grumpy and snappy and all that just bought out my stubborn side and I behaved in a pretty unreasonable way throughout really.

We did end up talking before we went to sleep but it wasn’t until the next day when we truly cleared the air and I presented him with the wooden spoon and my bottom. However there was one thing he said to me that night which I have thought a great deal about and that is that maybe I don’t want that part of our D/s relationship any more, that I just want the fun kinky play and none of the rules, boundaries etc. It was that which really upset me that night because I felt like he was saying I was not submissive enough for him and as that is something I often feel is the case so hearing that from him was really painful. Note: Just to be clear what he was actually do here was checking in with me. Do you still want this? and it was a perfectly legitimate question given the circumstances.

Then I read the piece by Jade and I have been pondering my box ever since and the more I think about it the more I know I want that box, his box, actually our box because it is constructed with my full consent and input into what the box looks like. I like it, I have never been happier in my life before. Being in this relationship makes me feel safe and loved and nurtured but also challenged and encouraged and bold and brave. I have achieved more in the last 7 years within this box than I ever did before it.

However the box needs to be strong and resilient because I will often bash against the side of it looking for way out, testing it strength, questioning it at times too and I am sorry Michael that I am not the type of sub who can kneel quietly inside your box and wait for your commands but you also told me you didn’t need or want that and I know some of the time, like the other night, my push back is hard and extreme and that maybe sometimes that is exhausting to you and I am sorry for that too. I wish I didn’t erupt like that sometimes and could be more compliant. I have joked with you many times that I am a rubbish sub but in some ways it is true because I am feisty and stubborn and at times difficult but that doesn’t mean I don’t want this because I very much do. In fact I need it and you and us. Our box is where I feel safest and whilst I might rattle the walls from time to time I would be utterly broken if they fell down.

To Kill A Mocking Bird

To the naked eye

Oh Molly I can relate so much to this. I am going to have to have a longer think about it. I often say I am a rubbish sub for similar reasons. I do want this though and I need to be better at showing that. Thank you for writing this ?

Thank you so much for posting this. Relationships – kinky or not – are not all sweetness and light.

I think it helps a lot for people to read stuff like this.

The box… how I have longed to feel the strong walls of my box. our box, in the last year or two. The walls are not gone, but they have grown weaker, and I long for the day when I really feel the confinements around me again. Thanks for sharing this post, Molly.

Thank you so much for sharing this and I can totally relate. I sometimes doubt I can ‘do this’ as I should and I know I present all sorts of challenges to Cuiplash that must be hard for him to reign in. But oh how I need that box too, although I know I will always test those sides just to feel they are there xx

That’s a beautiful piece of writing, so moving and honest. Thank you for sharing it

This was such a beautiful and moving post. I struggle with sharing my feelings in life and in relationships and to see you lay your feelings bare here is such an inspiration. Thanks for being you, Molly.

You know, my Kitten was reading this out loud to me, and since we have had some PMS related issues recently, I asked whether this was the case with you and your Sir. Just after I’d asked the question she read the line about you getting your period!

Long may you both prosper.

Long may both prosper.

This gave me so many feelings as I’ve done this exact thing in the past. Enjoyed submission but then depending on my mood railed against it. I have so much respect for any D/s relationship who can work through this for a full time dynamic. For me it’s hard to even be full time submissive in the bedroom alone. I could actually feel your hurt Molly and that makes me so sad. It’s a complicated thing, to enjoy being submissive when you’re such a strong willed individual. If anyone can make the box work it’s you and Michael. Xx

Oh Molly…such a loving, heartfelt and moving post. I think for both of us that “railing against the box” even as we deeply want it is because we are both such very strong women. At least I know you are – I might just be a “rubbish sub”. LOL

I have not gone to read Michael’s response yet, but I have a feeling he loves you for that very strength.

I am torn if I am glad or not that my post made such an impact on you – I don’t like to see you sad. But thank you for sharing your vulnerability. That, too, speaks to your strength.

[…] Boxed in by Molly Moore It was a hard post to read because I hate anything that hints a problems with the two people I really adore. It was a good post though because it speaks to honesty in relationship, honesty in D/s. The honesty of examining when and if changes are needed in the relationship, honesty about when you’re grumpy and just don’t want a spanking with the wooden spoon. […]

[…] looking to learn or grow from what I read and loved both of these posts,  True Stripes and Boxed In by Molly’s Daily Kiss for that reason. I know that many of you will already follow her blog […]