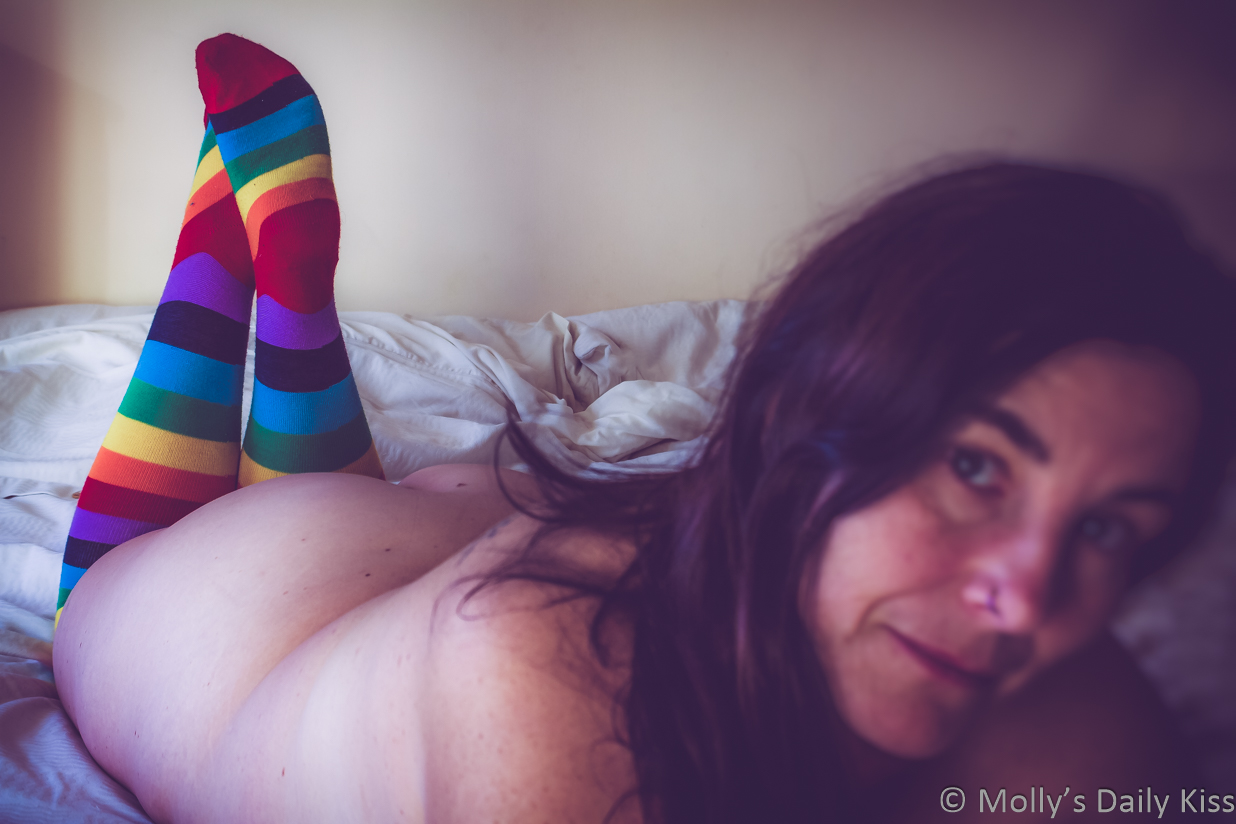 It has taken me most of this month to write this post for Mx Nillin’s One Rainbow Apart meme. I have written it a 100 times in my head but actually sitting down and typing it out, well let’s just say I kept finding reasons not to do it. Then this morning I realised if I didn’t do it today then I would miss out on joining in with Nillin’s meme something I promised myself I would do at the beginning of the month. So here we are, it is a longish read that covers topics of shame, bullying, bisexuality, homophobic language and internal biphobia but there is a happy hopeful ending if you get that far.

When I went to secondary school (In the UK that happens at 11) I made a small group of friends. There were 4 of us. V, J, C and myself. We went to each others houses, hung out at lunch time etc. I was closest with V. We spent a lot of time together mostly at my house. She had a 2 younger sisters who she found highly annoying and so was always keen to get away from them. At the end of that first year of school we had got so close that my parents even invited V to come on holiday to France with us.

V was most definitely what you would call a best friend. We spent hours talking, laughing, watching TV. We read the same books, shared magazines, all the things tween girls do. V was taller than me, (the story of my life) she was also slim and slightly muscular, she had long dark hair and dark brown eyes. I realise now that I was probably utterly infatuated with her but at the time I just that she was super awesome and cool and she was my best friend.

We had spent a lot of time watching the 1984 Winter Olympics together. There was much excitement that Torvill and Dean where going to win a gold medal. Neither of us were particularly into ice skating but it was everywhere and everyone was watching it. We were sitting on the sofa at my house watching and V was teasing me that I thought Christopher Dean was sexy and probably wanted to kiss him. The truth was that I didn’t. What I liked about the ice skating was not the men but the women. There was something about their outfits, the way you could see their bodies, the leotards, the way their partners touched them, the intimacy between them displayed right there for everyone to see. I found it mesmerizing and I guess V had picked up on that but assumed it was the men I was captivated by.

She was teasing me, making kissing noises at me. Pretending to be Christopher Dean and she leaned in towards me to go for the full on kiss and where one moment I had been laughing and saying no suddenly I was leaning in towards her and I went to kiss it. It just felt the right thing to do. She was right there, offering her lips to me. I wanted to kiss her and her to kiss me. For a split second our lips touched but then as I lent in for more she jumped back and looked at me with absolute horror on her face

“Ewwww, what the fuck is wrong with you?”

I sat their stunned into silence. I had not idea what had just happened, why I had done what I had done.

“Are you some sort of weird leeza?” she said as she jumped up off the sofa.

I don’t really remember what happened next. I think she stayed for dinner as planned but soon after asked my parents to take her home. We barely spoke a word to each other that whole time. The rest of the weekend I didn’t hear from her and the next week at school every time I tried to find her and the other 2 girls they were not to be seen. Over the next few weeks it became absolutely obvious that she was not interested in being friends any more and that I had been very much dropped from the group.

I think a lot of the hurt I felt at the time I have somehow mostly blocked out over the years and of course hindsight is a wonderful thing but I now know that what happened led me to burrowing down into my shell. I became isolated, quiet, even more shy than I already was. I was small, quiet and alone. I was a bullies dream and they soon found me and targeted me on and off fairly mercilessly for the next 3 and half years.

I don’t blame V for that. I know she was aware of it happening and gave me a wide berth. I don’t even blame her for her reaction to me and the near miss kiss. Like me I am sure she was woefully ignorant and uneducated. I suspect, also like me, she had no idea that bisexuality was a thing. At the time though I was hugely hurt but also sad, confused and filled with shame. It the shame part though which stuck with me and probably had the most profound long term effect on me.

I had never told anyone this story before until about 2 months ago when I told it to The Charmer. Even after all these years saying it out loud to someone I found myself briefly immersed back in that moment on the sofa and hearing the words she said to me and even more importantly the look of horror and revulsion on her face and a burning throb of shame almost made me stop telling him the story. I carried on though and I am glad I did because in that telling it seems to have finally lost some of it’s potency to make me want to curl up in a ball and die.

Sadly though I think that incident led to me suppressing so much about my sexuality for such a very long time. I truly believed for many years that there was something weird about me. For a long time I thought you were either gay or straight. I genuinely did not know you could be bisexual. I knew I liked men too, a lot and so I completely denied my attraction to women for a very long time believing that it was weird. I had similar thoughts about my kinks too, not that I had the language to identify them as such I just thought the things I desired where weird and that there was something wrong with me.

When I did discover that being bisexual was a thing I now know that was very much through the lens of the male gaze. Lads at university who talked about 2 girls getting in on together. Seeing porn that featured that was predominately two girls and a guy, or else two girl who were most definitely performing for an audience. That audience being a male one. It was not about their pleasure but about men finding what they did a turn on. For a long time I think my bisexuality was framed by that. It was OK if it was for men to enjoy but that meant I never really indulged in my bisexuality for ME.

Unpicking my own internal biphobia and understanding how female bisexuality has been largely framed as a turn on for men has taken me a very long time. (A shout out here to my friend Quinn Rhodes for hir insight on this subject)  It has only been very recently that I felt like they are my desires for me, that I can explore them for what they are to me not how they are framed through someone else’s enjoyment of them. Despite having identified as bisexual for a long time now it is only recently that I realised I have never really explored what that means for me. I think in some ways I have always been a little scared of it and certainly have absolutely no confidence when it comes to connecting with people. I guess when you spend a lot of time shutting it down that tends to be your default response.

What happened that afternoon between V and I has without a doubt cast a long shadow in my life. Feeling ashamed of my desires definitely had an impact on the decisions I made about the relationships in my life. I suspect if I had better understood my sexuality, my Queerness and my kinky self at a younger age my life would have ended up looking very different. I think I would have been able to defend my differences from myself and explored relationships in a less conventional way. Who knows what might have been but also who knows what still be?

I feel finally that I am in a place where the possibilities to truly discover myself exist. I am in a relationship that doesn’t confine me and whilst the current plague situation has rather put a dent in actual exploration with folks, the timing of which HUGELY sucks, I also think this pause in things has given me time to really think and work through some of the lingering self imposed boundaries that shame and fear had created in me not just about my bisexuality but also when it comes to be non-monogamous and also the domme side of my kink.

The other day I sat thinking about that afternoon with V on the sofa. The truth is it is a memory I have larger cut out of my mind because of how it made me feel. The other day I smiled to myself as I realised that for the first time ever I was imagining what it would have been like if maybe she had reacted differently. What if she had kissed me back? What if she looked at me afterwards with surprise but also lust, a wicked grin, a shy smile. Maybe we would have turned the TV off and sloped off to my room, maybe she would have been my first and mine hers. For the first time ever I imaged that ending and it made me horny and it made me smile. I used to be ashamed of what happened. Finally, it seems I am not anymore.

The Wizard of Oz 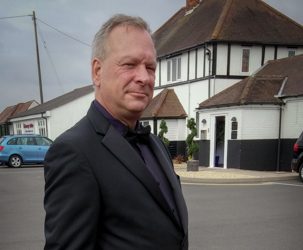 24th February 2011 Here goes with some cherry popping. This is my first contribution ...

It is dusk. We are sitting outside in the garden enjoying the last of ...