Kink Of The WeekMasturbationMenstruationMy Body 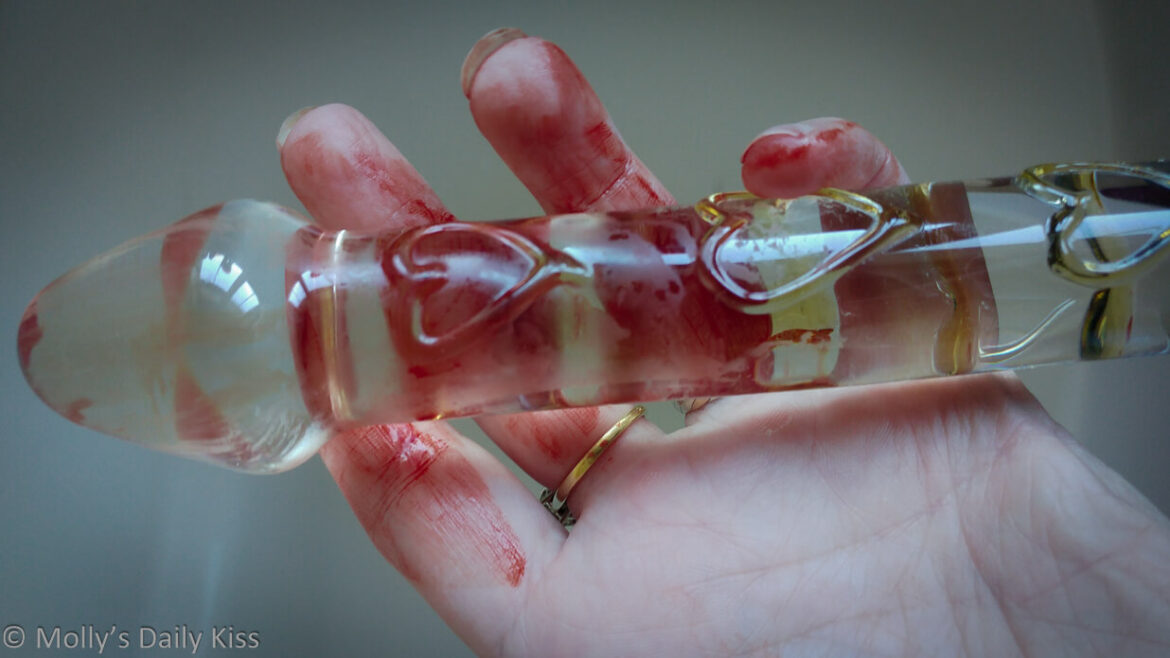 I have apologised for having my period or period related things more times than I care to remember. In fact probably as many times as I have had my period, which is a LOT. If not for the period itself then certainly for being grumpy or sad or tired.

“Sorry I am (insert things feeling such as tired, grumpy etc) it’s probably just my period”

Whilst I hate that. I should be able to be those things just because I am and not have to excuse them with hormones. I also know that sometimes it is fucking true. I am really fucking grumpy because my hormones are making me want to stab things. Of course that only serves to make me more irritable. The bit I need to drop from it though is the apology. I should have to be sorry for having my period.

With my 1st husband I definitely apologised for having my period. He absolutely would not come near me when I was bleeding but worst that that he wasn’t even comfortable with their being evidence of it. Fairly early on in our relationship he told me he didn’t like it if I left the empty tampon wrapper on the side in the bathroom or even the box of tampon out on the side.

“Why can’t you just put them in the bin” he would grumble and then maneuver his way around them like they were contaminated waste rather than bits of crumpled paper. Of course I apologised and tidied up and tried to not do it. Making sure I tucked the box away in the cupboard when I bought them back from the shops. I once asked him to buy me some in an emergency and he refused. Told me to get my Mother to get them for me. I never asked again.

As things changed with us, as I changed, as my resentment towards him and my unhappiness grew my attitude changed and I went from apologetic to defiant. I would leave the papers there on purpose. Sometimes placed delicately near the toothbrush holders or dropped on the bathroom floor so he would have to step over them. I know it sounds petty and childish and I guess it was but it felt like a big old ‘fuck you’ and it made me smile.

I know without a doubt that he contributed to me feeling like my period was something pretty disgusting and I absolutely believed that no man would ever touch you while you were bleeding.

That was continued during my summer of swinging. Clearly you can’t really go swinging while you have your period. It is probably not the ideal thing when you are essentially hooking up and but it did contribute to my feelings that my period was just an annoyance and it would invariably decide to appear on a weekend when I was free to go to the club or someone had invited us to a party or something. My partner at the time also suffered from Vasovagal syncope which is basically when you pass out at the sight of blood and so that meant he wasn’t up for period sex at all.

It wasn’t until I met Michael that I learned that many men are actually fine with it. On my first visit to Philadelphia I was really upset when I realised my period would happen while I was there. He reassured me that it would make no difference but I will admit that I didn’t really believe him. The morning it arrived I burst into tears and when he asked me why I was upset I told him. He had to go to work that day but informed me at the end of the day he would prove to me that it made no difference to him whatsoever. He most definitely did that.

It was a complete revelation to me and I don’t think I really believed him back then but over the years I learned that he definitely didn’t care. I would still find myself apologising for it though. Afterwards when I would realise he was covered in blood I would always find myself instantly saying sorry for it. He once asked me if I would say sorry if he was covered in my juices and I said no absolutely not and he said, this is just a different colour juice and now we need a shower.

I can’t claim I am totally over it when it comes to partnered sex. I am OK in the moment, during the sex, but afterwards when there is a mess there is still something about it that I instantly find myself apologising for. I guess the idea that it is messy and undesirable is so deeply ingrained that even years of being told it is OK those thoughts still linger.

I have found though that in my experience men who are super into their female partners pleasure really are OK with it. That doesn’t mean it is a kink for them but they see it as just part of having sex with a person who has periods and are unfazed by it as a result. As one lover once said to me, you are even wetter and more slippery, what is not to like.

I don’t think I have a kink for period sex. Although I will admit over the years to have enjoyed it more and more and found that it feels very raw and primal to me, there is a intimacy to it that I find really intense. Not because I get off on it but because it feels like something I wouldn’t share with most people, only someone very special who I really trusted and felt close to would get to share that with me. It feels like something that would connect us physically even more.

It has taken me many years to get to a place where I no longer hate my period but I am definitely past that now and whilst I don’t have a kink for period sex I do have one for my period blood and masturbating during my period. I absolutely love it. I am a fairly active wanker but when I have my period I will often indulge at least twice a day. I have always masturbated during my period because I have always found it worked miracles on period cramps but in the last 10 years I have made a connection with my period and my body during that time that is far more intense.

I like seeing the blood on my fingers and the toys I use. I will often smear it on my legs etc afterwards and I love stepping into the shower and watching the water turn red. There is something about wanking during my period that I find hugely sensual and even beautiful. I feel very raw and in touch with my body. It might sound cheesy but I feel powerfully female in those moments and there is something very sexy about it to me. As a result I have come to realise that I don’t really mind how my partners feel about period sex as long as it is not shaming. I don’t need them to have sex with them during my period, although I am up for it if they are, because I am very happy having sex with myself instead and I have absolutely no apologies to give to anyone about that.

Handcuffs: Unsuitable for the job

I love this! Your ex husband sounds like a couple of my ex’s. You’ve made me feel like I need to wank on my period more too.

I am happy I inspired

I can agree with a lot of what you have write here from people in my past too. My OH is fairly cool about it, like if I need tampons etc, he would most def get them( I use a cup now though). I tend to be hornier while I am on and while he doesn’t realise it, sex while I’m on isn’t his thing yet every single time I’m on, we end up having that kind of sex where there is a real need for each other… I do wonder if it is a pheromone thing because he usually isn’t aware I’m on.

I have bought so many different types of cups but they just never work for me. Either they are really uncomfortable or they leak

So much here rings true for my own experience. It is still something I would rather didn’t happen as I don’t feel it adds anything for me and isn’t a kink, but at the same time I take it is an indication that someone really wants to be intimate with me if they are ok with sex and play during periods.

My experience of periods is that of a partner that is in pain and that sex of any kind isn’t really an option at that time. I think you’re right that as long as its not shameful that’s all you can ask because blood certainly isn’t everybody’s thing.

Totally. Blood is not everyone’s thing and that is fine but when it is accompanied by ewww that is gross kinda attitude then it’s not OK

The first time I ever had an orgasm during PIV penetration I was on my period. We always had sex on my periods, especially on the lighter, non-crime scene looking days. It was like an interior massage to me. But now I have an IUD- no period at all, and I love that even more.

I wonder how I would have felt today had I still gotten my period. Sometimes, seeing your beautiful images, I wish I had…

I am so not feeling sexual early on in my period but towards the end I get super randy. I’m more likely to wank than fuck, though. But yeah, it should most definitely be an accepted thing and not something to apologise for.

I understand the raw and primal feeling, I’d totally be on board with it all if my libido didn’t vanish into outer space just before and during my period *sigh

Here is where my double standards come into play. As a lesbian period sex isn’t a kink for me. However, it doesn’t faze me when she is on her period. My desire to please her and the incredible hotness of her reactions is what gets me going. But while it’s not a hard limit if she wants play when I am on my period, I am uncomfortable and apologetic.

Also, I don’t mean any disrespect but your ex sounds like a jerk.

Haha, he absolutely was a jerk is SO many ways

I have a blood phobia and the first time I had sex with a partner during her period, I pulled out, saw the blood and passed out. A lot of apologising went on after that from both of us.

Thanks for sharing this with us. This blog is very Informative for me about Pleasure sex toys.

[…] about menstruation, and I absolutely LOVE the images she posts with either blood on her fingers, or blood on her toys. Others have written about it too, and sometimes I almost feel envious that I cannot experience […]