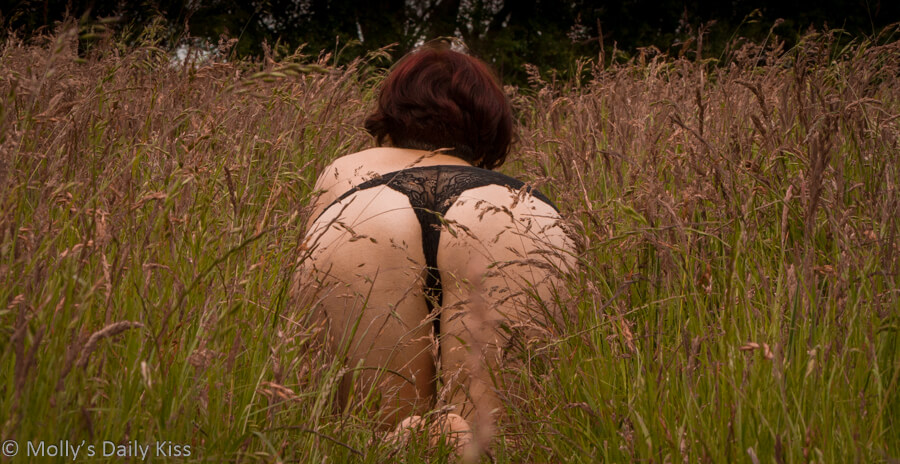 I am laying on the carpet alternating between doing sit-ups and weights. It is part of my daily routine now, a task set by him a month or so ago; if I don’t go to the gym I must complete 30 minutes of exercise a day. It can either be using the weighs and doing resistant exercises or I can go out for a walk or on my bike. Half the time I forget or leave it to the last-minute which means, such as on this occasion, it is 10pm and I am on the rug doing my 30 minutes.

He is working but every now and then I see him glance over at me. I check the timer on my phone and sigh, still another 15 minutes to go. I knuckle down and work through a variety of moves in turn the next time I look at the clock there are just 5 minutes of my time to go. I turn my head towards him and that is when I notice that he has undone his pants and is watching me whilst leisurely stroking his cock. He grins at me when he seems me looking. The temptation is clear and I nearly let it get the better of me but that would only come back later to bite me in the arse, possibly quite literally if he was in the mood for some biting. No, this time I resist and continue with my workout I just keep watching him while I do it.

Five minutes seem like a very long time when you are watching a man slowly masturbating and all you want to do it help him but eventually it is over. I turn onto my side, then  up on my knees, my next move is instinctive and instead of standing up and taking a few short strides to him I crawl. His eyes never leave mine as I make my way across the carpet on my hands and knees to him. Out of the corner of my eye I notice that the pace with which he is touching himself increases slightly and when I get to his feet and start moving my body up his legs he make a little noise, a cross between sigh and a growl.

Crawling like this, to him, clearly works for him but it also works for me. There is something primal and raw about it that turns me on. I feel sexy crawling towards him like that. It is definitely a statement of intent and there is both something very submissive but also slightly predatory about it that I find fucking hot. I know he finds it sexy too and that creates a feedback loop of well, sexy, which just makes it work.

However not all crawling is sexy to me. Tumblr is full of images of women, often on a leash, wearing sexy lingerie, crawling next to or even behind a suited man and yes he is always suited in those pictures, because apparently that it is the accepted Dom uniform for men on Tumblr. That kind of crawling, where it is a symbolic slave like act does nothing for me. I have no interest in crawling around behind Michael at a play event or being sent to get something on my hands and knees. It would just irritate me, I am not that kind of submissive where being lowly works for me. I am the kind of submissive who wants to stand at your side in a pair of shit hot heels, not crawl around in your shadow. I like being provocative

For me crawling in and of itself is not a turn on. Being asked to crawl to the bedroom and fetch a crop or whip is not going to work for me, or being expected to do it as a sign of my subservience, but in the moment when I find myself down on my knees is a different matter altogether then, it is sexy and hot and I will be more than happy to crawl my way into his pants.

Wanton Wednesday a week ago…..

I want to go home.

Fifty Shades Of Me

Yes! When the crawling is an instinctive move it’s so very powerful. And good for you on finishing those last five minutes. Not sure I could have shown the same restraint. 🙂

“crawl my way into his pants” – LOVE this description! 🙂

Getting through a workout would be so much more pleasurable with that kind of motivation. I’d willingly crawl to it myself

Completely agree about “like being provocative” . . . and can I say that your beautiful picture is certainly that . . . almost something Lioness-like in it’s beauty !!!

Crawling definitely is a thing for me. I have already written my piece and will share soon 🙂

Strangely, I started out my post with exactly the same thoughts on crawling to fetch something then realised I was actually pushing my true thoughts away pretending they didn’t exist.