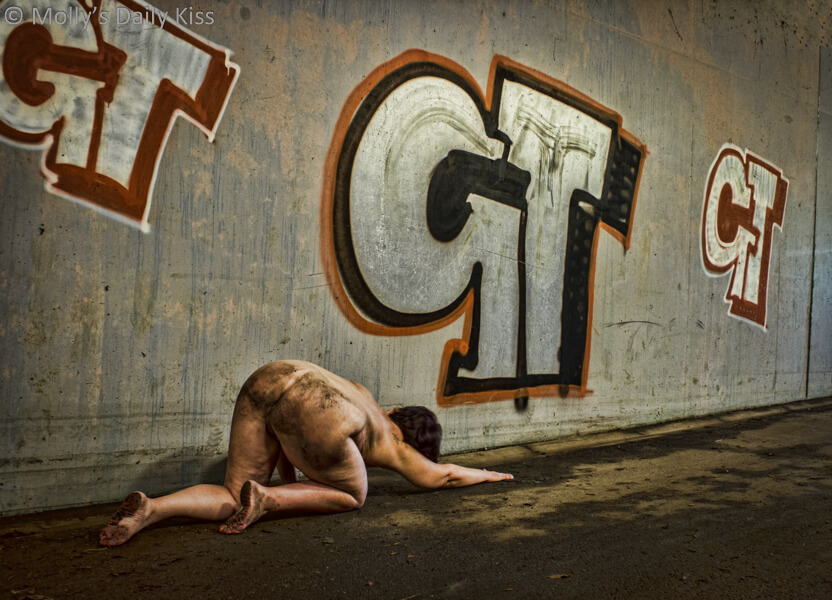 Earlier this week I wrote my Kink of the Week piece about crawling however when I stumbled across this image on my computer I realised that I had missed something out of that post about crawling around being dirty, not in the suggestive sense of that word but the literal sense. Crawling around in the dirt, being dirty, getting it on my skin, feeling the grit dig into my knees and the mud drying on my skin is oddly incredibly hot to me. I am not even sure I have the words to explain why that is apart from to say that there is something very raw and basic about it that works for me. Now I have no desire to do it just for the sake of doing it. You are not going to find my just crawling around in the mud and the dirt just because, but the idea of being chased through the woods, falling in the dirt and the mud, getting it on my hands and face and knees as I scrabble to get away turns me the hell on.

This image however is a bit challenging for me. It is has languished in my ‘to be published’ folder for a while now. It is one of a series of images I took in this location three of which I have already published here (Write On…, Red Raw and Held Captive  but this one I have kept to myself for a couple of reasons.

1. Because I had just not found a topic or post to go with it.
2. Because there are things about the way my body looks in it that makes me uncomfortable.

For some reason the light, and I think, the dirt on my skin makes it look like I have a weirdly lumpy inner thigh and also the pose and angle of the shot makes my bum look, umm, rather substantial, not that there is anything wrong with a substantial bum mind you but in this image I feel like it looks oddly out of proportion to the rest of me.

However, and here is where the model and the photographer in me go to battle, as the photographer (yes this is a self-portrait) I think this is fucking awesome image. I love how I have captured the textures of the ground and the griminess of the wall, I love the way the light plays along my back and thigh and the way the dirt looks on my skin and despite what I wrote about my body I love the pose, there is something incredibly primal about it that feels both right and deliciously wrong in this setting.

So despite the model in me cringing, the photographer in me loves this image because it captures exactly what I have written about above, the dirt, the desperation, the fight, the disgusting wrongness of it all that actually makes for a quite challenging possibly even disturbing image but for me fills my mind with thoughts of torn clothes, blooded knees, matted hair and tear-stained dirty cheeks that makes me want to go and have a wank.

This is a very raw and sexy image. There is something so sexy about getting dirty.

This, IMNVHO, may be one of your best images ever published.

I was so glad this had your words to go with it. They helped me understand my own reaction to it. I was indeed challenged and disturbed by the ‘wrongness’ and the horror of it, but at the same time finding the image beautiful in it’s own right. It could be a painting somehow. It’s fantastically impactful piece of photography.

Thank you very much. For me it is the wrongness that does it for me

Wow, that is a serious image. I love it!! xx

Wow, this is an amazingly powerful image. I love it.

This is just so raw and yes, beautiful. Wrong and yet, just so right. I really love this Molly xx

Wow Molly – what an image. I too am glad you have words attached to it as I feel the image is more powerful knowing how you battled with publishing it or not. I saw none of which you described regarding your body. I see raw, powerful emotions radiating off the screen.

This image is art. Nothing but art. It should be part of a collection in a gallery!

Fuck this is so hot! It works for me in all the ways you’ve described and made me realise I left a few things out of my crawling post too!

It wouldn’t be all that long ago I wouldn’t have admitted what this image does to me. It’s only from getting to know you, exploring myself through my blog that I’ve realised it really is ok to be a filthy girl!

This is so powerful. How satisfying it must be to turn a vision into reality with your photos.

It’s a wonderful photo, and I’m glad you shared it!

Grime, dark, humiliation are all turn ons for me inspite of myself. Your image hits those spots

There is so much emotion in this image, Molly. The dirt and the grime and that outstretched arm, especially that arm, convey so much desperation, need, hunger. It’s really amazing. It’s hot, but it could also be taken out of a dystopian survival movie. Really fantastic photo.

I love this picture, because like the photographer side of you, I adore the frame, the way it captures just the right thing, and the light which works so well for this particular shot. Yet at the same time I can relate to how you back then? Or still? Dislike it too. Not because I agree with you in terms of this picture – it’s beautiful! – but because I have this too with pictures taken of me, and then I store them away and don’t look at them for sometimes months. Then at some point, eventually I suddenly appreciate the beauty that was there from the start, but which I couldn’t see because of my inner critic voice. Anyway, I’m glad you decided to share this in the end!

Yes that is absolutely the case. I do like this picture now but my initial reaction to it was overwhelmed with that inner critical voice for sure