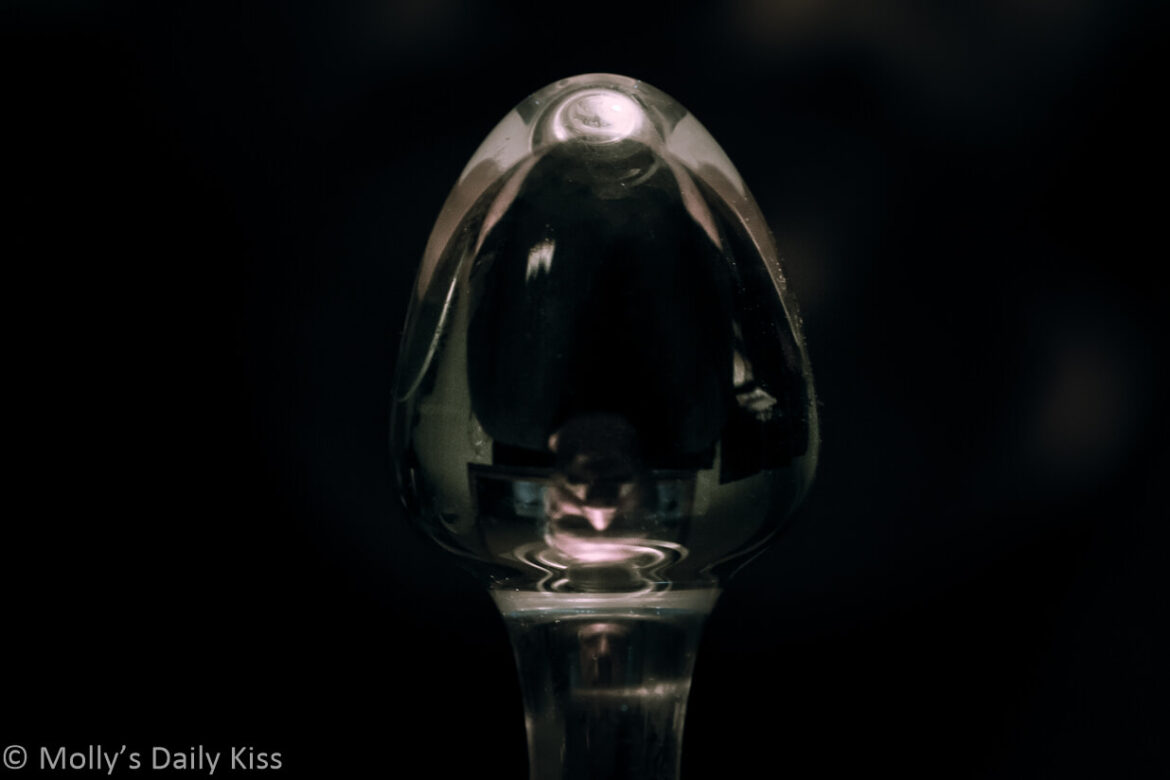 Poppy smoothed her fitted blue skirt down over her hips before she opened the door.

“Ah, there you are Poppy. Come in Poppy and shut the door behind you”

Poppy did as she told. She was getting and better at that. As the door settled into the frame there was s small click sound as Jason reached under his desk and pressed the button which controlled the lock.

Poppy stood and waited. She was better at that too.

Finally he looked up from his computer screen, leaning back into his chair he crossed his hands underneath his chin and appraised Poppy. Before today she would have fidgeted under the discomfort of his gaze but she was getting better at that too and so she stood perfectly still and let him look at her. When their eyes met he smiled at her

“Lovely, I like that skirt, it fits you perfectly”

It took all her will power not to glance down and smooth her hands over her hips yet again but she held his look.

“Please, take a seat Poppy.”  And he gestured to the chair that was placed in front of his desk.

It wasn’t until Poppy got parallel with the chair that realised there was something waiting for her in the seat. The glass butt plug shone slightly under the office lights and as she lent in to get a better look she could just make out a slight reflection of Jason’s face in the glass.

His voice startled Poppy and she instantly started fidgeting with the buttons on the front of her blouse.

Did you dress as I instructed? He asked

Poppy wiggled her hips as she pulled her skirt up over her them and displayed her perfectly shaven cunt to her boss.

“Excellent. Oh don’t pull it back down again Poppy. You are not going to be able to sit properly for me without your skirt being, well, pretty much where it is now.”

Which was puckered up around her waist.

“You can touch it” he said pointing at the plug. “Go on, pick it up”

“You might need this” Jason said pushing a small bottle of lubricant across his desk to her.

Poppy could feel the wetness clinging to the folds of her cunt and the heat of embarrassment burning through her face. She was rooted to the spot with the glass butt plug sitting in the palm of her hand.

“Hurry up” he growled

Poppy reached for the lube and with shaking hands poured a generous amount over the tip of the glass bulb which then slowly trickled down in glossy rivulets over the body of the plug. She could feel her heart beating in her chest. She had never done this in front of someone before and when she looked up at Jason he eyes were firmly rooted on her.

Leaning forward slightly she slid the cold hard plug between her cheeks and rubbed it over the opening to her bum.

“Open your eyes” he said “look at me while you do this.”

The heat of shame and embarrassment burned through her cheeks and her cunt once again. Breathing slowly and trying to stay relaxed she pushed the tip of the plug into her tight hole.

The birds singing outside her window seemed so very loud. Peering at the clock on her bedside table Poppy realised she was awake far too early for a Sunday but like most morning of the last few weeks her cunt throbbed almost painfully between her thighs. She was so filled with filthy thoughts of her new boss that they were even starting to invade her dreams, filling her head with disgustingly hot scenarios of him using her for his entertainment and pleasure. This one was a new one but recently she had woken up to thoughts of him getting her to kneel under his desk and suck him while he was on a conference call and making her sit in the chair opposite and make herself cum while he slowly rubbed his cock before bending her his chair and fucking her in the ass.

On the dark side

I liked the twist at the end 🙂

Oh! Well, you fooled me with that transition. A fantasy will have to do for Poppy!

That fantasy was very much ‘my speed’ – it pushed all sorts of buttons and made me want more. Like May and Cara – you reeled me right in, I thought it was actually happening for Poppy!

[…] Poppy did as she told. She was getting and better at that. As the door settled into the frame there was s small click sound as Jason reached under his desk and pressed the button which controlled the lock… Keep Reading […]

That is a yummy fantasy!

Oh my goodness, that was hot. I like your choice of names as they conjure up an image of Jason as a middle-aged guy, with Poppy being in her early twenties.

[…] Take a seat via @Mollysdailykiss I can’t think of anything to say other than this was so hot! […]