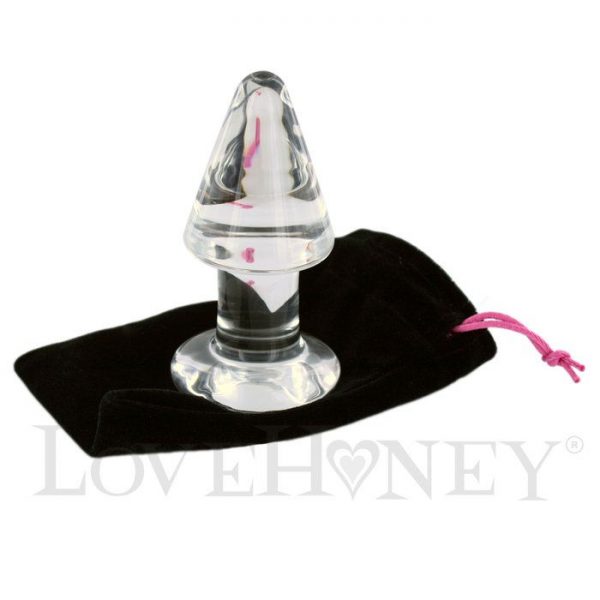 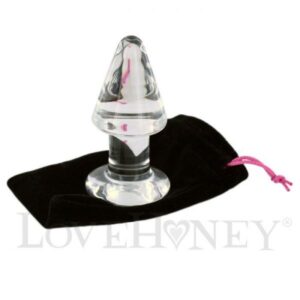 Isn’t it pretty? So smooth and cold to the touch, it looks like a work of art and I just couldn’t resist it. Actually that’s not strictly true I did make the initial suggestion and then presented him with a shortlist but he made the final selection. It was a good choice.

It comes with its own sexy little velvet bag to keep it in and being glass it is very temperature sensitive, you can warm it or cool it and it absorbs the body heat brilliantly. It was marketed as a plug for ‘beginners’….. “Small but perfectly formed” was the description. Well, perfectly formed, absolutely, but the width at the base is, as I found out, fair from small, and I think if you were a ‘beginner’ you would struggle with it…..

“Take your pants off” he commanded “Now get the lube, get it ready and I want to see it slide in you”

I could see his eyes watching my every move, and as I spread my legs for him I swear he licked his lips….

“That’s right my dirty girl, push it in”

To my surprise that was easier said than done and I found the width a struggle to accommodate and as I pushed it deeper I could not help but gasp, for a brief moment I nearly stopped, nearly let it slide back out. The pressure was intense, close to pain, and I cried out at the sensation and tried to relax. I knew that stopping was not an option; his words were clearly commands not requests. Part of me wished that he would take control, that he would push it in, doing it myself seemed infinitely harder inflicting discomfort on oneself is a hard thing to do, but he knows that and its exactly why he told me to do it. It’s a test, of my willingness to please him, of my submission to his desires.

“Come on my dirty girl; give me more, push harder, I want to see it nestled in place so that I know where it is for the rest of the evening”

With the sweat starting to bead on my brow and my eyes watching him, pleading with him, I pushed it past that stinging point and felt myself relax around it.

“Good girl” he purred…… “Now put your pants back on”

I wore it for the rest of the evening. It was a strange sensation; one that I think will take some time to get used too. Sitting was ok, pleasurable in fact and I found myself rocking my hips but walking around was tricky. It felt unnaturally full and the pressure was intense and when it shifted or moved it made me flush and my hands shake slightly.

Let’s just not call it a contract