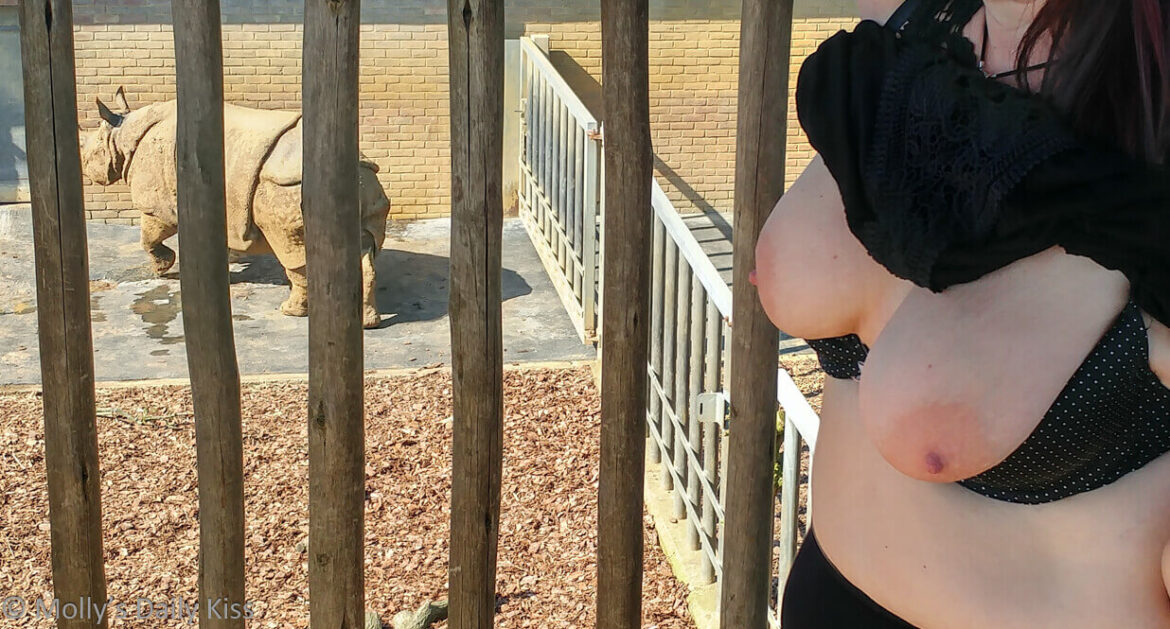 When I was asked what I wanted to do on my birthday back in April I requested a day out. We had some vouchers for Whipsnade Wildlife Park and so decided to use those.

The weather fairies were, unusually for the UK, very much on our side and it was the most beautiful sunny day so we set off with my camera and picnic lunch and drove the 35 minutes to Whipsnade. On the way there I mentioned that zoo was a location on the Scavenger Hunt location that we had yet to do and that maybe today would be the perfect opportunity.

We spent a truly lovely day wandering around this huge zoo and because it was midweek and early in the year the place was fairly quiet but even so we still managed to find ourselves in the company of someone at all the different animals we went to see and by the afternoon I had pretty much given up hope of us being able to get a picture.

In the end it was the high walkway over the Rhinoceros pens that gave us what we wanted. When we first got there, there was another couple in the little look-out tower but when they saw us coming along the walkway they left. Maybe they had been hoping to take naughty pictures and we just ruined it for them. Surely it can’t just be us?

Anyway, once they vanished I took up position against the railings and then we had to wait for the Rhino to be in the right place to be in the shot. Luckily she was very obliging but just as we took this picture two zoo keepers turned up and I quickly had to cover up. We left not long after that both hot and tired but it had been a brilliant day and a lovely way to spend my birthday and the shot we got for the Scavenger Hunt turned out to be absolutely perfect.

Ps… If you are wondering about the title of this post and just assuming I can’t spell. When my daughter was little she had a stuffie that was a Hippo and Michael kept saying it was a Rhinocerouserous and they would have long extended conversations about how wrong he was at bedtime and so now we all call them Rhinocerouserous!

Making the breast of it

Oh, this is such a clever Scavenger Hunt to get, especially because of the title of the post too!

Haha, love this cheeky post! What a fabulous birthday treat, especially since birthdays are tricky for you.
Indie xx

Oooh. I think your rhinoceros beats my crocodile photo for sheer awesomeness 😀

I think this is fab, I not only love the image, but also the idea of you both interrupting another couples hopes of a naughty photo shoot (I am 100% going with this being the case) x

I just love the cute story at the end. I can imagine a younger DQ arguing with him. Well, I’ve seen the arguing in action so it’s not hard to imagine. I’m very glad you had a good day!

[…] absolutely adore rhinos and I love the Scavenger Hunt, so this cheeky Rhinoceros picture from Molly is perfect on both […]