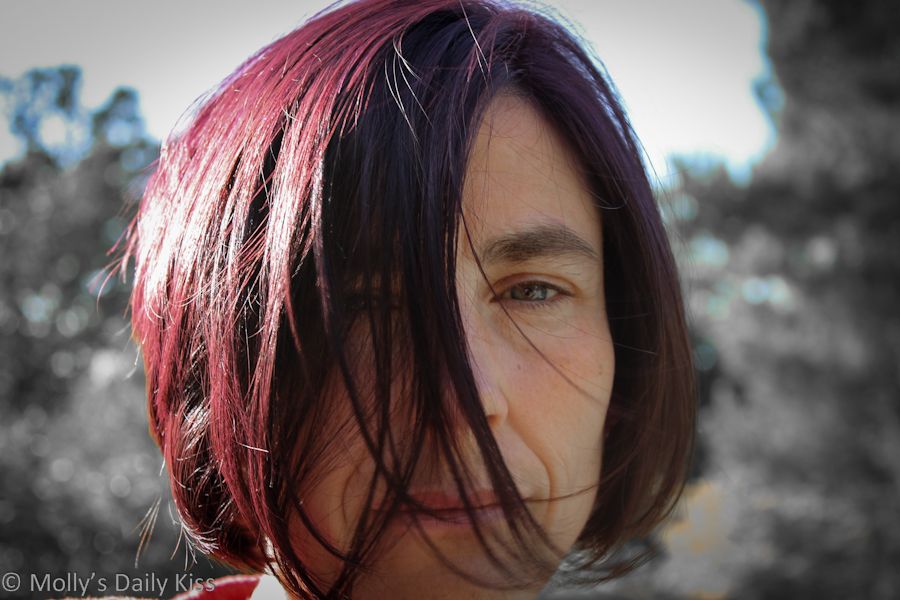 Once upon a time many years ago I had long dark locks of unruly hair. Much to my disgust it was neither curly nor straight but instead had a horrible tendency to inhabit that annoying state somewhere between the two. I would spend hours with hair mousse and curling tongs trying to get it to resemble the fine head of hair that was sported by Baby in Dirty Dancing (yes my teen years were spent in the 80’s) where curly hair, the bigger the better, was ‘the thing’. I never ever managed to achieve the Baby look (I so wanted a pair of those white denim jeans she wore too) Just as my hair would not curl properly it wouldn’t go completely straight either, remember this was the days before hair straighteners existed and so I was the geeky, dumpy girl with my hair in braids a look that didn’t seem to endear me to anyone of my age group.

This hair situation plagued me for many years until I got pregnant with my first child and in a spur of the moment decision decided to get rid of the long hair. At first it was into a fairly boring plain shoulder length cut but since then it has gradually got shorter and shorter until I finally found a place where its wild characteristics could be tamed into something more manageable. Even now, with the straighteners it will tend to revert to a chaotic mess but in this short style even that has its appeal. Now and then though I contemplate letting it grow. It would be fun to have all that hair back now so that I could fashion it into long pigtails. Coupled with a short skirt and girly school socks, I am fairly sure it would be a look that would inspire a strong reaction in @domsigns

I won’t do it though, it is a nice thought to have now and then, and I adore the pigtail look. I think they are very sexy and suggestive on a grown woman, or maybe that is just my dirty mind but growing my hair just so I could do this would be insane and I fairly sure before it even got close to it being long enough I would be back to the hairdressing asking for it to be returned to its current state. I would be just too impatient to wait for the many many months it would require to get the desired result and if I am truly honest I really love my hair now and that not something that you would ever have heard me saying when it was long.

On the receiving end

To the Bottom of Things

First off i’m sure you can play a very fetching school girl without the pig tails. Oh now that I chased that tempting image out of my mind.

I completely get the not having the patience to let your hair grow out because every time I try to wear mine even a touch longer I end up frustrated and getting it cut again.

While my relationship with my wife would not be a typical DS dynamic by any means hair is the one place where I do exert a perhaps undue amount of influence.

I love your hair just as it is, and think this is a stunning pic of you!

From a fellow late 70’s and ’80’s teen with difficult hair “I hear you sister”! I think we get to our 40’s and find our style that works for us finally!

I agree with the others, it’s a stunning portrait, very lovely!

My Serafina much prefers short hair that’s more managable. She’s also of the opinion that long hair doesn’t look as nice on a woman “her age” – of course I counter by saying women “her age” aren’t often naked and collared on the internet – just to be technical.

You are always an inspiration . . .

Long hair makes a woman sexier and with longer hair, a woman can be more flexible in trying any hair style.

I have a similar cut and I can totally relate. I love my short cut, can’t think of a time I loved my locks when they were long. I love the color of your do as well. That is a great pic with the sun showing off your color.