Let’s just not call it a contract 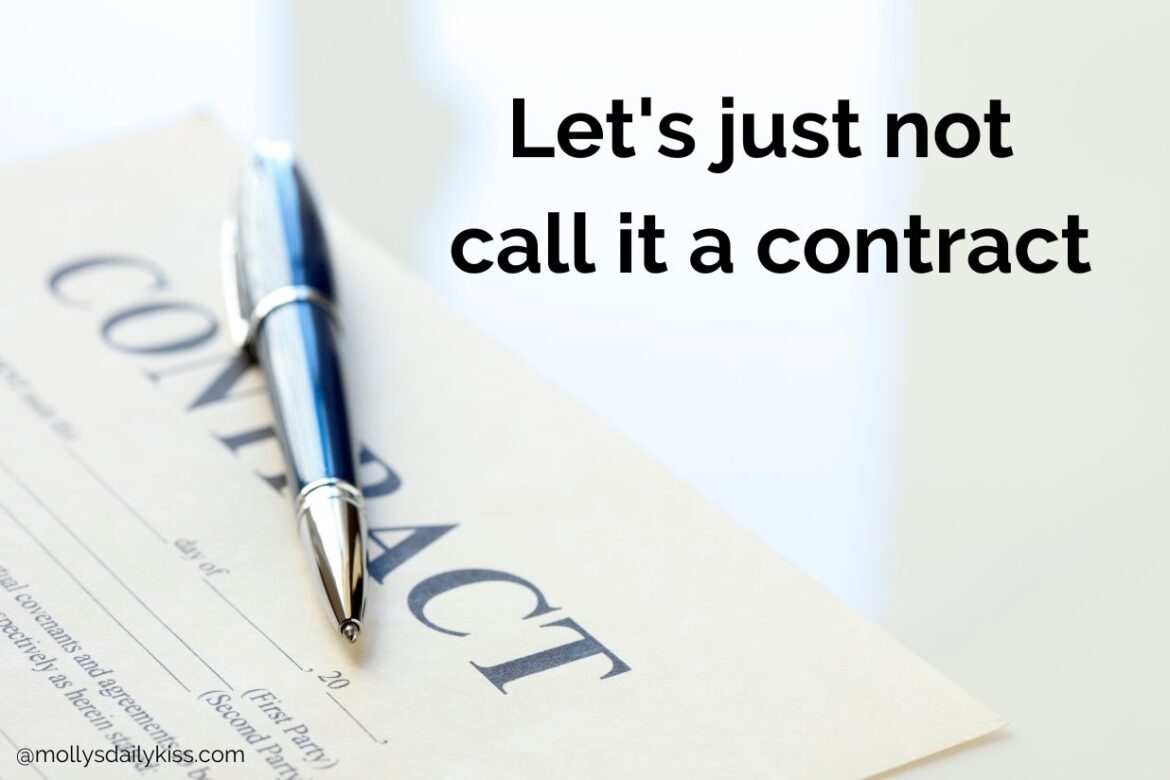 If they ask you to sign a contract up front or for money, that’s usually a bad sign. ~ Dia Frampton

I appreciate this quote is about the music industry but it it applies just as well to contracts within a kink setting. If someone’s starting point is, sign this contract and/or give me money that is pretty much always a massive bright red flag. There are of course some notable exceptions, for example if you are buying a paid for professional service or negotiating a financial domination kink dynamic, but even then you would probably spend time talking and negotiating first. In my opinion early demands within a new kink relationship are always something to be wary of. Someone who demands stuff, regardless of what it is, straight of the bat rather than taking time to learn, explore and negotiate is someone to avoid.

I have had two marriages.

The first one turned out not to be my best idea ever but of course only hindsight showed me that. At the time it seemed like exactly the right decision. I don’t actually have that many regrets about it, they are more wistful in nature rather than bitter, well, they are now. Also that marriage resulted in my beautiful children who I love very much. Good things definitely came from that union and we had happy moments

The second one, well happily that is ongoing. In a few weeks time we will have been married 11 years. It has been a roller-coaster ride that is for sure but even on days when were things have looked fairly bleak between us it seems that no one really wanted to let go. I am beyond happy for that and that it has bought us today where are committed to each other and our life together.

Marriage is a contract. Unlike kink contracts it is actually a legally binding contract recognised by society as such. You would have thought that would make more us wary of it but apparently not. The fact that society markets it as a desirable thing, something to aspire too clearly helps, but also despite the legality of it there is a fluidity to it.

We make our marriages our own. (mostly). There is the legal over arching aspects of marriage but how that actually works for any given couple, what that actually looks likes in the every day is unique to the people involved.

When Michael and I got married we wrote our own vows. Did you know they have to approved by the registrant and you still have to say the actual official vows and declarations.? I still have a copy of the things we said to each other and whilst we have been imperfect at times that commitment to care for one another no matter what has stayed with us. Even when things have been really hard and our partnership was fairly fractured somehow we were still there caring for one another. That friendship and love never went away and that it what has allowed us to find our back to one another and so we continue to define our marriage in a way that works for us.

One of the things I hated from 50 Shades of Grey was the contract element. It is possibly the worst example of a kink contract ever. There is no discussion or negotiation involved. The submissive gets absolutely no input and yet they are the only one expected to sign it. It is presented to her like a standard rent agreement which is had written up even before he met her and she is told to sign upon the dotted line or leave. Literally everything about it is awful. As kink contracts go, it is the perfect example of how not to do one.

There are good examples out there of how to do them and I can see how they can be a useful tool for communication and to help you define your roles and set your expectations. I think they can be particularly useful too in a non-monogamous setting where there maybe multiple people involved in different kink roles. Having a contract where you define what aspects of life and how much time you have to focus on that relationship could be a good thing but even then there is something about the contract in that scenario that makes me twitchy. It just feels too formal and rigid.

Maybe it is not the concept but the word that puts me off. The idea of having a set of agreements or parameters of a kink relationship doesn’t in it’s essence seem like a bad idea, in fact the opposite. A bit like the marriage vows where you commit to love, trust, honesty, caring, centring your relationship in your life, having the same for a kink relationship sounds powerful and bonding and I think it is something we all do in our relationships in some way or other. Shared values, shared goals, shared commitments. I am all in.

As with so many things my motto is ‘never say never’ but my feelings on kink contracts as a formal document have stayed pretty much the same over the last 15 years. I can see why some folks might like them but they feel too clinical and unsustainable to me, but agree to be honest, open to change, to approach everything with love, friendship and kindness and agree that your end goal is the same, to be together and to be happy well then sign me up. Let’s just not call it a contract

Let me be your rhythm

I agree, kink contracts feel unsustainable to me. They are often too complicated and not decided upon equally. A marriage contract is important, other why go through with it. I am so glad you found your way back to wanting to be married to each other.

Thank you lovely, me too