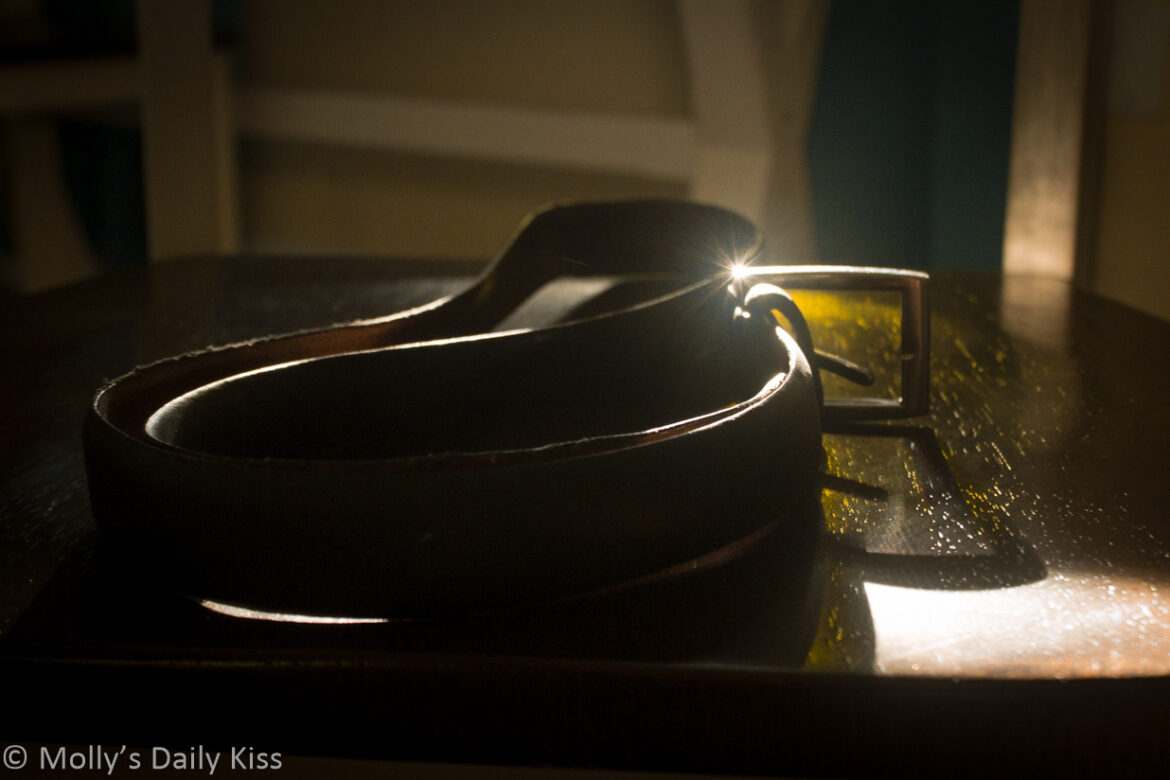 H is for hurt me. Which is something I desire a great deal. Just to clear for anyone new here I mean in the consensual kink way when I say that. This post is not written by me but by a previous partner and relates to the Kink of the Week topic of Sadism. Is he a sadist? I will let him answer that

“Pleasure is sweetest when ’tis paid for by another’s pain.” – Ovid

Generally speaking, it had always been my position that I do not do labels. That said I am beyond a doubt a sadist. Just last night I came to the thought of Molly stripped naked and bent over, hands placed just so on the seat of a chair and my black leather belt placed meticulously in her line of sight as I beat her with a wide leather strap and savored watching her fight to stay in place as asked. The belt a taunt and a promise that it would be used again to hurt her. (The picture was taken in Miami during just such a scene)

Often the joke is anything black matches my soul.  When watching TV crime dramas decades ago the normally unoffendable me would growl in disgust when a character would paint an alleged criminal as a “sexual sadist”. Sadists, to varying degrees, are everywhere. Most of us aren’t serial killers.  Some are even vegan pacifists. Have no fear I’m not here to take away your meat. Unless of course, that would make you suffer, then and only then might playing that game be fun.

Over the decades you might hear things like “sadists are sick”, “They hate (insert gender, role, whatever)”, and my all-time favorite was “I could never date a sadist” said by a person who loved the extreme use of nipple clamps and couldn’t orgasm without them. So if you like the occasional pinch, smack, or bit of pain, and asked a partner to provide that for you like it or not you may be playing with or even creating a sadist. So what if you like your nipples pinched, a love bite, little rough play, and hard fucking from time to time. So what if you and a partner takes part in a little bedroom sadism as long as you both are getting off and into it that is all that matters

The truth is nothing made me a sadist, really it didn’t, I have always been one, it’s simply my nature.  Inside of sport and the rules of the game I wanted my opponents to think twice when near.  When allowed I would hit them, get inside their heads, twist their thoughts, and take them off their game. It was and is simply sport. Like all good sadists, you let their own minds do far more evil than I would ever be capable of. (Note by Molly… he is a genius at this game)

In my professional life, I am a sadist. Working endlessly to take my competition’s share, to hurt their profits, and yes at times to drive them to the edge of bankruptcy with the hope of picking up the crumbling pieces at a bargain price and making a tidy profit. That is when I work best. when I have someone to ”hurt”.  I tried being rainbows and sunshine, it doesn’t work. Conquest and conflict drive that part of me. So while the world sneers it’s back to making money by taking businesses away from someone else.  Such is life, I am the villain, cast me as the devil, and ladies and gentlemen welcome to hell…

Still, sexually am I a sadist? I  asked Molly if I was. Here is her reply.

You are definitely sadistic outside of the context of kink. In regard to business and even if you think about your fighting as a young man, but with regards to kink…You like hurting someone! You like seeing them suffering and struggling, you get off on spanking someone until they are red and raw Damn you get off just watching that let alone doing it.”

She is absolutely right.

My entire adult life and much of my sexual play and kink have been based around impact play. As a long-time spanking top, there have been partners who have not been romantic entanglements, or sexual that I simply played very hard with. Leaving them marked, sore, and in suffering by the end.  It worked for me. I liked to hurt them. Of course, there have been crushes, girlfriends and others along the way who wanted that feeling but that I was also in some way sexually involved with, (or had a massive crush on and never got to the sex part).

Not all play has to be to the edge. But on occasion the kind of play that takes my partners to their limits, that leaves them struggling to bear it, bruised marked, and swollen, often for days, sometimes even longer, feeds my black little soul like nothing else. My orgasms when I masturbate are very rarely played to a real of nice gentle slow “normal fucking”. They are driven by thoughts of hurting you, of marking you, of watching you struggle as much with the own thoughts in your head about what is going to come next and how “horrible” it may be as to what is actually happening.  It’s about you kneeling, exhausted, marked, and gasping with your tits offered so I can come on the angry red lines that I decorated them with.

It’s to the thoughts of roughly fucking your ass after it has been paddled repeatedly and I know that every thrust causes you to wince, clench, and turns you on separately.  As you lay there face down, ass up, desperate for your own release. I will make you suffer, and wait until you ask.  Then I will bargain with you what exactly will you be willing to do to get to come.

I need you to love it, or love to hate it in those moments. Yes I am a sadist but one who wants you to go away and wank to thoughts of it later, be it hours, days, weeks, and perhaps even years later. To be the little secret in the back of your mind you retreat to in order to push yourself over the edge, to be the reason you are turned on when far removed from me. I want to be a few lines in the darkest chapter of your fantasies for the rest of your life. (Or in a few cases a few volumes of your darkest desires) Was our time a  stolen moment you privately replay like a personal porno reel in your head? Whether alone, with me, or with other partners. Make no mistake you are that very thing to me.

Go admire the marks, poke the bruises, get turned on remembering the paddle landing cruelly on your ass, my belt biting your flesh, your own arousal at the time despite it all. Come looking at the marks on your thighs, to the feel of the ghost of the ropes that tied you down.

I tried vanilla dating a few years back. It did not work for me. She was young, and beautiful, and so not kinky. It didn’t work for me. After a short time it was a true case of it’s not you, it’s me.

Then again I am not a comic book sadist – the type of person who would be featured in a kink cartoon as an archetype. I don’t play with random strangers (even pre-pandemic).  The need to know what you want, what will get you off and the connection is what I need. But make no mistake when that is in place I definitely want to hurt you.  After all, that is what sadists do.

Kink, real kink (to me anyway) is not always grand, it’s not ritual or gestures. It is not titles and outfits. It’s cool if that’s your thing, it’s just not mine.  Sadism works the same way. As an example it was a lazy Saturday morning, the sun was up, it was warm and there was a world to be explored.  As we spent an hour or so fucking her sitting astride me slowing taking her pleasure, she looked me in the eye and said “hurt me”. In one swift movement I pushed her off me took her wrists and pinned her to the bed. Letting her struggle a little…just enough to know she was not going to be able to get free. Then I tightened my grip. With her pinned in place, and starting to suffer from the pressure of my hands. the pain burning in her wrists, I simply kept fucking her until her cunt was adequately sore, her legs askew and trembling until I was ready for it to be finished.  Nothing elaborate, no paddles, or whips, or positions, or rope. Just the twisting grip on my hands on her wrists until she was mewling in pain.

She asked me to hurt her, and I totally got off on it, doing so in what at the time seemed the most natural way possible. It worked, her head buzzed, she got the pain she craved and left for the day a very, well fucked slut by my estimation. But to know for sure you can always ask her.

Note by Molly… My left wrists ached for the rest of the day. Every time I moved it the little ache would remind me of what he did. It bruised, a small dark mark on one side of my wrist that took days to fade. I asked him to hurt me. I wanted it. Craved it. The fact he did it in such a simple way somehow makes it all the hotter to me.

I love seeing inside a person’s head, getting to know what makes them tick. This post was valuable in that regard, and highly enjoyable.

Wow! I honestly really enjoyed this post. We read so much about what makes a submissive tick, or why a masochist enjoys pain…

Not very often do we get to read the thoughts of a sadist and if anything this post made me wish for more. I found chunks of it very relatable to my OH, his personality and who he is which of course, as well as giving me insight now makes me even more curious!

Your words are hot – you should write more! Enquiring minds needs information!

Love the bit of psychological impact with the belt!

[…] I had forgotten clean about it until I saw Molly’s post for the letter “H”: Hurt. I will not lie, that post excited me, not only for the subject matter, but because I know the […]

I think I need a moment after reading this. I have to admit that although I don’t like physical pain, someone getting in my head and fucking with me ticks all my boxes.