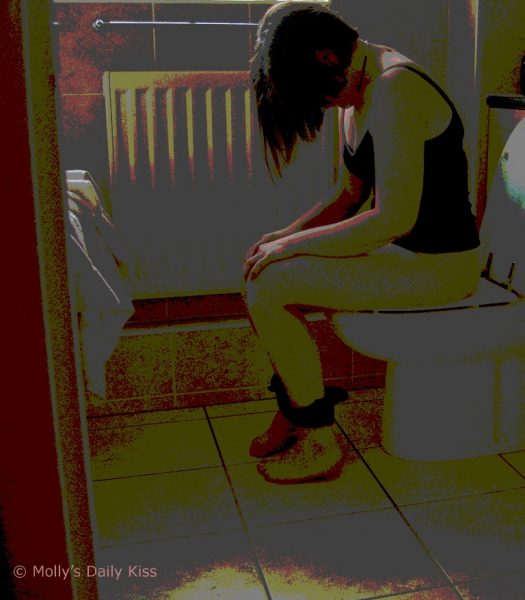 Back when we were in a long distance relationship (he was in the USA and I was in the UK) I expressed an interest in holding his cock for him while he peed. I don’t know where the idea came from but the thought of doing it felt sexy to me. It would be a way of serving him.

On one of my visits to see him, after a night out, he called me into the bathroom, unzipped his fly and told me to hold his cock while he peed. I did as he instructed and at first everything went well but I think it might have been the kissing that distracted me from my task but I discovered that just the smallest movement could have rather alarming consequences. Luckily the hotel bathroom wall was tiled but my ‘license to drive’ (his words, not mine) had been well and truly revoked. (He was also very good about doing the wiping up while I laid on the bed laughing so hard tears ran down my face)

On a subsequent trip, after I promised that I would pay better attention to the task at hand, literally, I was granted permission to try again. This time I was determined to get it right, I mean, how hard can this really be? So I took a firm hold of the situation and kept my eyes focused on the goal. Much to my horror as things started to, ummm, flow, they did so in two streams in opposite directions. Image a hose pipe with your finger over the end and the water spurting out in two opposing streams. For a brief moment I did consider trying some wiggling action to see if I could get things flowing in the same direction but before I could make matters worse @domsign took control of the situation. This time I didn’t leave the room in a fit of giggle though and I was instructed that ‘a firm grip of the situation’ was in fact the cause of the problem.

Since that day I have managed to master this skill and am now in full possession of my ‘license to drive’. It is not something we do very often but it is granted to me now and then. I am fairly sure he is still cautious about letting me loose. Despite having managed to do a good job I think those first two rather messy attempts have stayed with him.

Joking aside, watersports are not a big thing for us. We do from time to indulge, the activity described above being one such example which has also included me getting down on my knees afterwards. The other example is that most days we have a shower together and quite often @domsigns will use this as an opportunity to pee on me. Just writing that sentence makes me blush and squirm a little and that is exactly why he does it because he knows it makes me feel dirty and naughty and the other reason, which when we talked about this subject for this post he was quick to point out, is because he can. I am his property after all.

The only other time we have explored this kink is that once he told me that I was not allowed to pee until he gave me permission. He then proceeded to ply with plenty of fluids until I was quite literally bursting, his reply to my repeated requests where that I could pee, but only if I wet myself. At first I tried just holding on in the hope he would change his mind (like that was ever going to happen) but as I fidgeted and wriggled my way around he sat by calmly, watching and waiting, and when I pleaded, reminded me that I was free to pee, if I peed in my pants. When I finally gave in it was harder to do than I expected. I guess we are so conditioned not to do it that convincing my body to let go really took some concentration on my part but finally it happened. It was a strange and yet oddly pleasing sensation to feel the warm liquid flood my knickers and trickle down my legs. I stood there, my eyes on his, as he watched me and the hot blush that covered my face and neck must have surely lit up the room.

When we talked about it afterwards he explained that it had been about exerting his control but also pushing me to let go of mine. To give in to his requests even if they didn’t make real sense to me was a way of playing with the power dynamic and ergo my head. He was right about that, I felt hot, flustered, dirty, naughty and amazingly turned on as I stood there in my own mess. We have not repeated this again, I am not sure it would have the same power a second or third time around. I think that process of him breaking me down and making me give in to his demands would just not be there now that I know what his intentions would be.*

I think for us watersports is not a kink that is about the act itself but far more about what it represents which like nearly everything we do as part of our dynamic is his dominance versus my submission.

*Dom Edit: I do have plans that will do that very thing but in a different way <eg>

Oh my, I am suddenly hoping Lord Raven does not read this n get any ideas. I more than get why giving that control over would be a turn on though

This is such a turn on. I love holding a guy’s dick while he pees. I also get a thrill from holding it until I can hold it no more. The feeling of release, before and after, is like a long lasting orgasm.

I wonder what @domsigns has planned!

Very interesting post and I love how the act was used as part of your submission bringing you further into His will.

Really enjoyed reading this, it’s certainly not for everyone but yet i think what i like most about it, is what you pretty much summed up in the end of your writing, its not about the act itself but what it represents…i loved that and couldnt agree more.

While peeing (on others, or on me) has no appeal to me, this was really interesting to read. However it’s the gorgeous photo edit that really caught me 🙂

I should have known our posts on this would be along similar lines and yet there is a vast difference in our views on that experience.

I am the same when it comes to watersports; the act itself doesn’t really do it for me, but what it represents does.
An ex-Dom also played that game with me and I remember well how difficult it was to break that barrier and actually wet myself, it was a powerful reminder of the dynamic though.

Definitely a turn on.

This Article was mentioned on mollysdailykiss.com