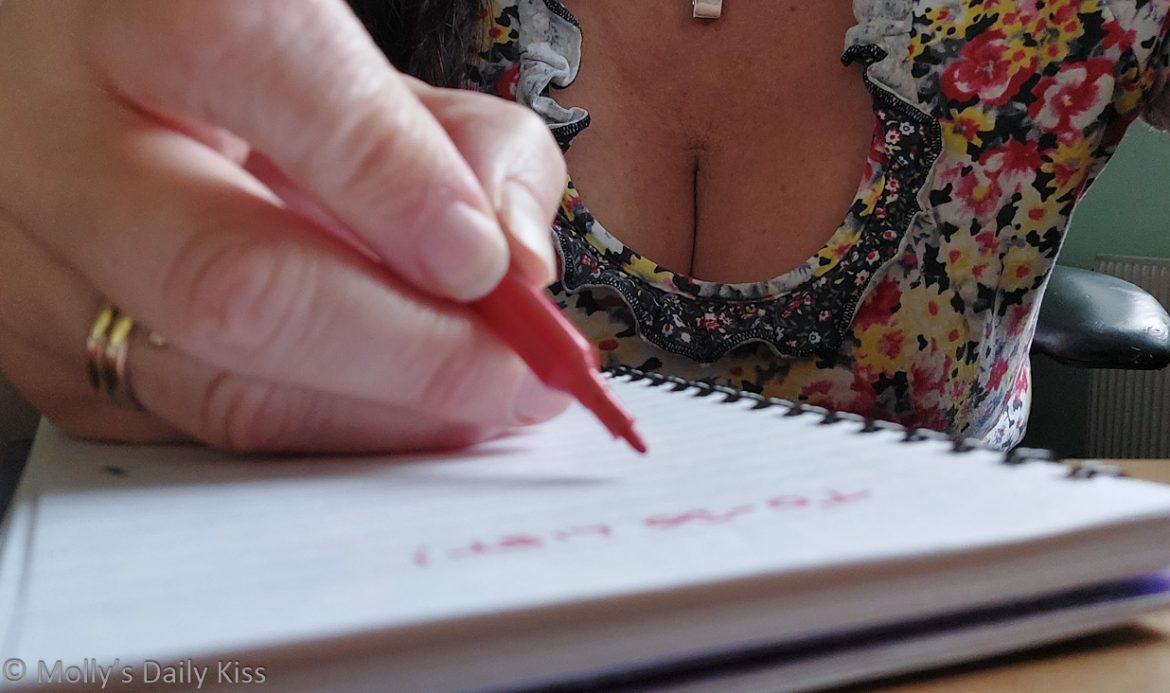 “although the actual act of punishment itself is not a turn on, the power that it embodies, the role that he has within that, is.” ~ Molly Moore

Yes I am starting this piece by quoting myself, my past self. I wrote this back in 2013 when real punishment was the current Kink of the Week topic and now here we are in 2022 and it is the turn of that subject again on KOTW.

What is real punishment?

Basically it is not faux punishment as in a form of role play but actual punishment for actual infractions. It might take the form of some sort of impact play but it could also be the loss of something or being made to do something as a punishment. The post I wrote back in 2013, Crime and Punishment, detailed how punishment worked for me, for us, back then. I was in a D/s relationship with Michael at the time and very happy however as I covered in that post it was not the actual punishment that turned me on but the power and control element that is spoke to within our D/s relationship that worked for me. I hated being punished

And over the years that only got worse. I found it a really challenging part of our D/s relationship and started to have feelings of anger and resentment when physical punishment we applied. In hindsight I realised that there was a slight humiliation aspect to it that I struggled with but punishment is not meant to be fun and so I did my best to accept it. I was wrong to do that. Not really communicating that to Michael at the time was unfair and removed his chance to work on the problem with me and find a solution that worked for us both. I always prided myself on my ability to communicate but I know there was definitely times when I failed miserably and this definitely one of those times.

If you had asked me that a year ago I probably would have said I didn’t recognise the person who wrote it. Being angry and sad and so very very lost resulted in me completely switching off my submissive side. Switching off is not the right word, completely shutting it down. It was not me, and not something I desired. I tried to slice it out of me. I knew in the moment I liked aspect of it within sex etc but being submissive to a dominant partner. Never again, were words I used. Foolish really, as one of the things I always say I have learnt from being kinky is, never say never. So now when I read that post I smile fondly. It was a happy time. One I look back on and treasure. Do I want to go back to that? No. But do I want to move forward and find out what does work for me? Yes.

I know that impact/pain play is not something I enjoy when it comes to punishment. I love impact play and some forms of pain really work for me, others are an endurance to get the thing that does turn me on; the marks, but as a real punishment not so much. That doesn’t mean a spanking in the moment for being cheeky would be bad, that does work, but applying some sort of impact play that I hate as a consequence makes me want to withdraw completely.

Don’t have to be impact play related.

I have taken part in Ferns work out challenge a few times now. It is a 12 week challenge where you set your daily work out goals and enter them into the #SpreadsheetofDeath If you complete your challenge each week you get a lovely gold star but if you fail 2 weeks in a row you are culled from the spreadsheet. There are no mitigating circumstances, Ferns is a tough taskmaster. Even if you plead that you did all the workouts but forgot to fill in the spreadsheet, you are toast! It is the Hunger Games of workout challenges.

And oh boy does it work for me. I have taken part a few times now and apart from once when I totally spaced on filling it and much to my sadness got culled (I now have an alarm on my phone to make sure that NEVER happens again) I have completed it every time. See, consequences work for me.

In my work, deadlines are my Dom. Set me a date and I will nearly always deliver. I say nearly because sometimes shit happens but for all my paying clients they know I will deliver it on the date agreed. Some have even remarked to me about how much they like that about working with me. His exact words: I love working with you because I know I don’t have to worry about it being delivered if you agree to do it. One of the nicest things as client has ever to me actually. For me that deadline feels like a consequence. Get it done or else… And it works

My brain is noisy. There is always a lot going on in it and sometimes that makes it hard for me to get things done. I am definitely a procrastinator and also can be easily distracted. I like the structure of a to-do list and also I LOVE a deadline. Something about that makes me step up and get it done and when I am faced with a ‘consequences’ that seems to give me the focus and drive that I lack at other times. Take this post for example. I have been pondering it for a while but also putting it off. Today it got added to a list of tasks that if not completed will come with consequences (yet to be decided but suggestions have been made) and so here I am typing away and turns out I have much more to say on the subject than I thought.

If you had asked me a year ago if punishment worked for me I would have told you absolutely not but that was because I have failed to think about it other than in the context of impact play. However the structure that it potentially provides and how that concentrates my mind and helps me to focus on what needs to get done actually really works for me. Realising that consequences in other forms actually do that. Well that has been a revelation that I am hoping is going to really work for me.

For me, failure is the ultimate punishment, I hate failing and nobody is able to punish me more than I punish myself for failing.

So I keep list upon lists upon lists in order not to forget anything meaning I’m less likely to fail, clearly life sometimes happens and circumstances are out of my control but that doesn’t stop me beating myself up.

Totally get this. I am definitely good at being disappointed in myself but it also does not seem to motivate me like expectations from outside

I always enjoy your detailed posts. This subject fascinates me. For me, the punishment is part of what I crave. I have always felt this way since I was a little girl. My parents didn’t use physical punishment, although I recall my mom once in a great while slapping my thigh really hard. I don’t know why I crave this, but I know after physical punishment I have a huge sense of relief and happiness, almost akin to afterglow following sex.

Even when non-physical punishment is given, I get a warm tingly feeling that starts at my head and runs down my body. It’s such an unusual feeling I can’t really describe it, but like a drug addict, I always want to experience the high again.

Some have wondered if I misbehave purposely just to be punished. No… that would not be appropriate submissive behavior for me. So I wait hopefully for Sir to note any infractions.

I totally get the buzz from it. I also used to like that when something was dealt with it was over. You had paid your penance so to speak.

I hadn’t thought about it like that but I can totally relate to a lot of this. Structure and deadlines work very well for me but I don’t enjoy the physical punishment that deals pain. Very well written.