In Jade’s introduction on Kink of the Week for this topic she very clearly states the difference between ‘punishment play’ as a kink and having a genuine punishment/discipline element to a relationship. I think she outlines the difference well….

“Play punishment is playful, and though painful, still engaged in with the intent of some kind of mutual pleasure or sexual excitement.  A real punishment dynamic is a way of life.  The punishment aspect is not for mutual pleasure (although there may be some satisfaction in it from adhering to the dynamic.)  It’s not about kink or sex, at least in terms of getting hot and bothered.”

However I am not sure I fully agree with the last sentence because we do have a real punishment element to our relationship and despite punishment being something I don’t want to elicit knowing that it is there, knowing he is capable of it, knowing he will do if it is required and do it in such a way as to make it something I want to avoid MAKES ME FUCKING HOT. Just typing that made my cunt twitch. I think it is the knowledge that he holds that power, that I have freely and willing given him that power in my life because not only does it benefit me as a person but also us as a couple, which turns me on. Trusting in him to be that person for me is a massive turn on and so although maybe the actual act of punishment itself is not a turn on, the power that it embodies, the role that he has within that, is.

So, do you have a relationship that has some real punishment/discipline aspect to it?

The short answer is yes, as I have clearly stated above. It is definitely a part of our D/s dynamic although the actual act of punishment is fairly rare.

If you engage in one, what does that look like, on a day-to-day basis?

We, or should I say, He, does not have many rules. For the most part they are; calling him Sir (unless in a situation/location where it would be inappropriate) No conspiring with other subbies to cause mischief, no biting, no shouting/raising voice, no masturbating without permission and no self-disparagement. That aside I think a better description of this part of our dynamic would be ‘expectations of behaviour’ rather than clearly defined rules. I know what is expected of me with regards to manners and behaviour and if I stray he will warn me that I am heading into dangerous territory.

As Jade said in her introduction there is a big difference between this and acting up, or, as I often call it, poking the bear. Being on the feisty side, poking the bear, is something that I definitely indulge in, and is part of the ‘play punishment’ aspect of our kink.

In all the years we have been together I think he has only truly punished me about 4 or 5 times which shows just how it much I think it differs from ‘play punishment’ for us. One memorable occasion was when he had to make an unexpected trip back to the USA after the death of his Mum. It was all rather sudden and the shock of him being gone again really taped into all my anxiety and fears which had built up over the years of our long distance relationship. In my rather shocked and lost state at suddenly ‘being on my own again’ I completely ignored his request not to tidy the room he has for all his stuff at the back of the garage. I only went in there because I felt lost and the next thing I knew I was cleaning it like a maniac. The whole time he was away I kept it a secret but on his return my actions where quickly discovered as he found all his stuff beautifully tidied and organised. He spanked me so hard that time that I wept, not from release, not from excitement but from the pain and because it came with the ultimate punishment

“I am very disappointed. You have let me down. Your behaviour is unacceptable. This is punishment”

That is the bit for me that I really hate, not the physical punishment, although it is something I will always remember, but that moment of realisation that I have truly disappointed him.

What is satisfying about a punishment dynamic?  What do you and the other half of the equation get from it?

For me it is the knowledge that he will punish me if he sees fit just as much, if not more so, than the actual act itself and is actually a kink within a kink as it definitely fits into my kink of being his property, being owned by him and the power dynamic that makes up our D/s relationship.

“It is a reminder of who you belong to and my responsibilities.”

Now can you see why it turns me on?

Do you (either from the Top or bottom side) find it hard to adhere to, to follow through on?

Rules are made to be broken aren’t they? See, that is the feisty bratty sub in me and the part that plays the punishment game well but when it comes to the real punishment aspect of our relationship it is not hard to adhere here. It is a key part of our dynamic and without it I actually think the whole thing might not work at all. I need that line, I need it to be clear, firm and strong. I need to know that he will put me in my place, that he will act on his word, that there is no ‘wriggle room’ because without it… without it I feel out of control because without it I know I am basically in control, a place I really don’t want to be

And his reply to the question….

“No, because it needs to be done”

One final word on this topic before I finish. Sorry this seems to have turned into a rather long post but I can’t leave this here without mentioning ‘the hair brush’. It is the one tool in his arsenal that is reserved purely for punishment and only one side of it too as the bristle side of the brush I have a real love for. It hurts but in that good way, that makes my blood flow and my mind fly but the other side, the large, flat, hard, unforgiving ceramic side is my nemesis. I hate it. It hurts in such a way that it makes me feel nauseous. It is sooooo stingy, that just one swat of that thing will have my eyes filling with tears and my body screaming to get away. The hair brush is his tool of choice for punishment and for good reason. 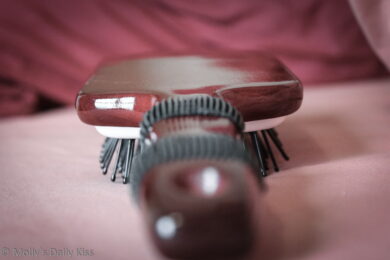 I had suspected you had a punishment dynamic in your relationship prior to meeting you and had it confirmed by Signs more or less in passing when he mentioned the same hairbrush you did in the post at brunch that morning. (I’ve since been to Target because one can never have too many wicked possessions).

You hit on something very early in your piece that is essential; that having that dynamic makes you hot. That fact alone not only works for you and Signs but could make a punishment dynamic interesting to me with a partner who felt the same way. If it worked them in a way that was in fact pleasurable on other levels even though they hated the idea of it during the actual event frankly I’d be a lot more open to it.

The fact you also have a general sense of guidelines and expectations that are both observable and reasonable is also something that when I approached the topic hadn’t been given much consideration. I went in more with the view of what I’ll call a “typical D/s punishment” mentality of I am a god and will make up things so I get to “punish” you. It comes from that fact that in most cases that has been what I’ve been exposed to when this type of is discussed. That approach is a huge turn off to me as you probably already know.

You post is a great example of the reason I love KOTW so much. I get to learn from everyone and reevaluate my own practices and opinions. Will I ever be a traditional D/s type of guy? Probably not but I’ll never say never and if the right situation was present maybe a punishment dynamic could be included. Yours is certainly interesting and worth a lot more thought.

Thank you for the comment. After reading your post on this subject I was interested to hear what you thought of our take on it. I completely got what you were saying actually an I think we are not that far apart in how we view it. Punishment for punishment sake, because he is ‘God’ would so not work for me. If you want to spank, flog, cane etc me because you damn well feel like then that is cool. Tell me that, whisper that into my ear as you hold me down, but don’t make up so faux crime to do so because that would just leave me feeling ‘wronged’.

I could never live under a strict list of rules, especially if they ever felt like rules for the sake of rules. I am far to rebellious for that to ever work well for me. However, expectations and some rules that have reason and meaning are good for me and for us. I am at heart, out of control, greedy, impatient, and easily bored (all things I have come to realise since finding my kink) I need that managed and most of all mastered with intelligence, humour, love, passion and maybe most of all determination otherwise I will run rings around somebody and find it elsewhere. Luckily Michael knows all this and is completely capable of being that person for me

Ps… As for the hairbrush, that thing is truly evil and you are a very bad bad man for buying one!

I couldn’t but nod as I read this:

Yes yes yes to what you said…

But to clarify, I meant the actual punishment itself is not intended to arousal sexually or to elicit pleasure…I completely understand (and in fact SO AGREE WITH) the fact that it can (and does) elicit the above reaction.

I have SO much to write/ponder on.

I like the “expectations of behavior” – I think if we were to ever develop our dynamic outside of the bedroom, this is what we’d have instead of “rules.” Great post!