Every Damn Day in June 2020Kink Of The Week 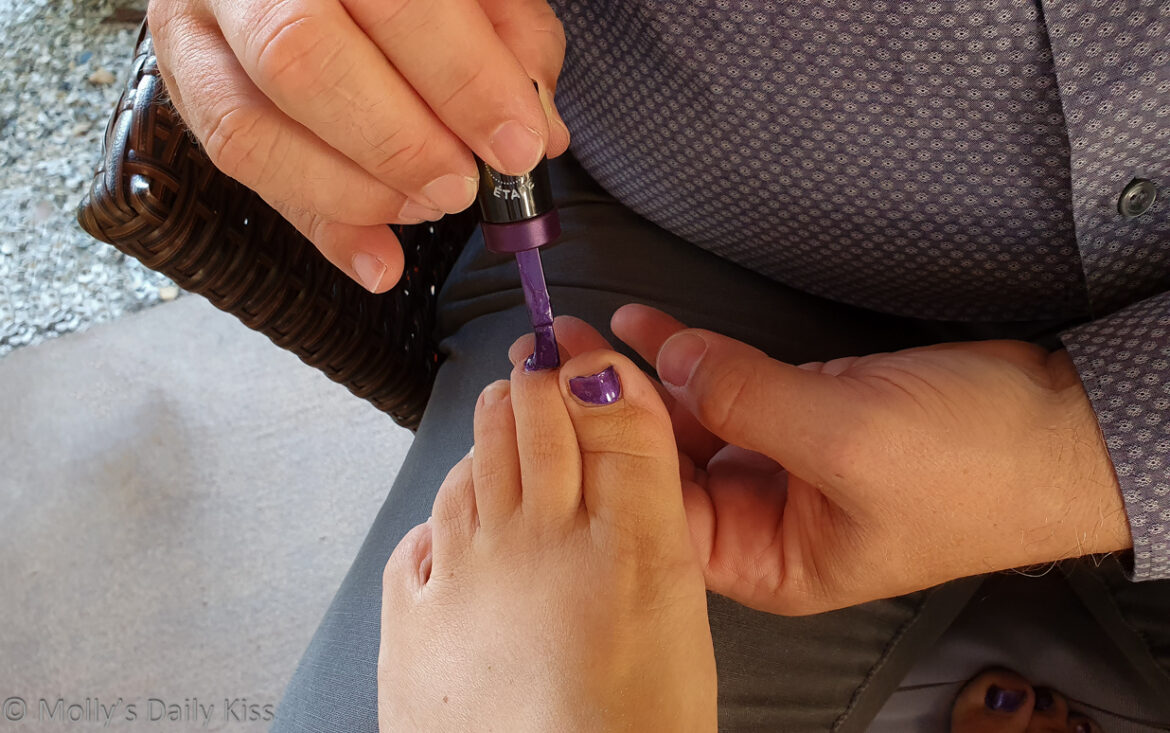 I have not painted my toe nails since last September. The last time they were painted he did it for me. I left it on for weeks, watching sadly as it wore away and grew out. Eventually I removed the last traces of it in mid December and a bit like my pubes vowed I wouldn’t paint them again until I was going to see them. Obviously I don’t paint my pubes, I am referring to shaving them.

I had shared a fantasy with him of being got ready for a night out. Being washed, underwear, a dress and shoes selected for me. Painting my nails and brushing my hair. We had talked about how it would work and what it would involve. How it would be him picking and choosing and controlling.

The idea had grown in my head years ago when I had started to think about hot it would be for someone to paint my toe nails if done in such a way as to be about that person pleasing themselves by doing it. A man kneeling at your feet and painting your toe nails could so easily be seen as a submissive act on his part and I can absolutely see how that would be hot too. Being directed, told to get it right. Servicing your woman to please her. Maybe a reward for a good boy or girl if they did a good job. The dominant side of my sexuality that I am just starting to explore is finding some of those ideas increasingly hot but this was not that.

This was about him marking me. Like the bruises he had left on my thighs and breasts or how he had come on me. It felt like just another version of that but I had failed to bring any nail polish with me. Luckily they sell it in the shops in America and so off we went to CVS. He told me to go pick a colour. That was easy. I picked his favourite colour; a deep rich purple.

A few nights later when we were getting ready to go out to dinner he asked where the polish was. Then we sat outside in the warm summer air and he took each of my feet in turn and with the precision and focus which he applies to so much of his life he carefully painted each toenail. I reached for my camera and took the picture you see above. I wanted to capture that moment because it felt so special and also really fucking sexy too. It was just another way for him to mark my body.

Of course the topic on Kink of the Week is currently washing and grooming and I knew I was going to write about him painting my nails but I also have to mention him washing my hair which is did a lot whilst I was there in Miami. There is something about someone else washing your hair that is turns it from a perfunctory activity that you do almost without thinking into a sensual and sensory experience. I wash my hair a lot, onbiously, but it never feels like it does when he does it. The way he massaged my hair and scalp, taking his time. Again that feeling of being his sole focus, the centre of his attention is a very intoxicating. To be cared for by another human being in that way may seem such a simple thing but it is actually very intimate.

Of all the time we shared together in Miami him painting my toenails and gently washing my hair was just as intimate as all the sex we had, maybe in some weird way even more so. The bond we created in those moments was powerful and intense and I long for the time when we can share experiences like that again. Yes I want to fuck with him with wild and passionate abandon but I also want to shave and bathe him and have him paint my toenails pretty colours again.

“being got ready for a night out” – wow, that pushed a button!

Whilst I love him marking me, I’m not sure I could handle any of this. But you can tell The Charmer he has very good taste 😉