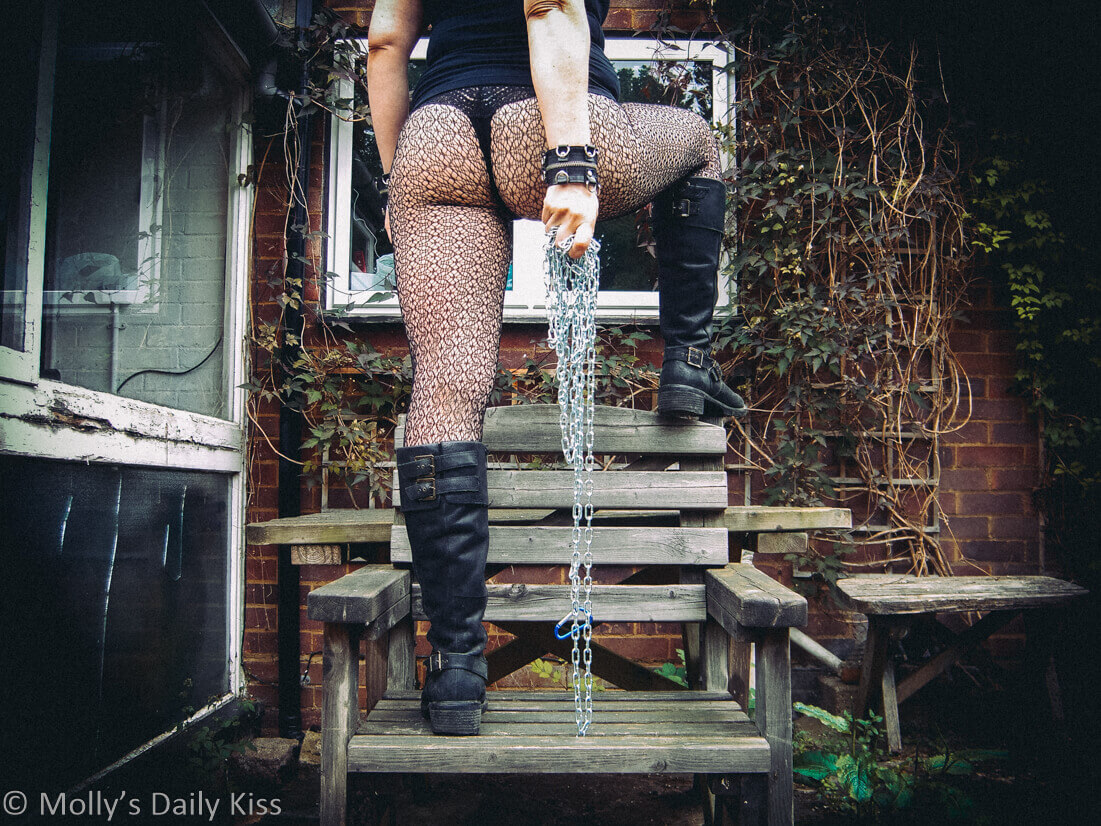 “Would you like to just be the one in control sometimes?”

“Doesn’t it get boring always doing what he tells you to do?”

“How do you stay in character all the time?”

“Perhaps you should spank his bum for a change.”

I can’t tell you how many times I have heard some version of the above questions/comments and not just from people who don’t understand kink or D/s but from people in the community too which always stuns me but shouldn’t really, just because someone is kinky does not mean they understand D/s however the worst people I have found for the, you should spank him, comment tend to be female doms which does kind of surprise me as I would never dream of saying that to their partner.

As for the stay in character one, that was asked to me by a journalist a few years ago who was writing a piece on 50 Shades for a magazine and wanted to talk to a ‘real life submissive’ she was, as this statement shows, woefully ill-informed about the whole subject of D/s but on the plus side was more than happy to be educated. In the end out phone call lasted nearly 3 hours and the piece she finally published showed a much better of understanding of D/s than when she first contacted me

I would be a terrible female dom…

…especially when it comes to men and even more so when it comes to Michael. Just the thought of it makes me a bit anxious, not the being in control so much as the physical aspect of it. I am very good at telling people what to do, ask my kids, and that aspect of it, being in charge so to speak I could do although it wouldn’t be a turn on for me, but flogging a man or using a strap on, just thinking about it makes me feel uncomfortable. I would have absolutely no confidence in what I was doing coupled with the fact that it would also leave me cold sexually means I just don’t think I could manage it and when it comes to Michael that feeling is about 10 fold.

If Michael ever wanted to explore his submissive side then he couldn’t do it with me and I don’t think I could even watch it. I think it would break something really fundamental in my head about how I view him and so I have always said to him that if he needed that he would have to find a femdom to do it with him and I couldn’t be involved in any way. I should point out though the idea he might want to do that is laughable, he would make a truly terrible sub, worse than my dom I am sure, but if there is one thing I have learned from kink it is to never say to never and it is good to ponder this things even if they do seem unlikely.

When it comes to women things might be slightly different, but only slightly. I still don’t think I could or would be a particular good femdom but in my experience I can definitely be more toppy with women. I am not interested in anything beyond the sexual side of it though and even then I would have my limits. I would totally be up for wax play or giving some light impact play and maybe using a strap on although I am not convinced about that idea. One other way it might work for me is if he was telling me what to do, guiding my toppy hand so to speak. That might work but mostly I would just rather watch him doing her, now that definitely works for me

Actually scrap that because this is also something that kinda freaks me out. The idea of being dominated by a woman doesn’t seem to work for me. There is nothing about it that appeals or turns me on. Having a woman do things to me that he is directing, now that might be slightly different but just being submissive towards a woman is definitely not my thing. Don’t get me wrong, it is not that I don’t get it or think that D/s should always be M/F, I can totally see how and why it works for people and why a femdom is sexy to them, I just don’t fit sexually into the right space in that spectrum when it comes to women for it to turn me on.

So do you want to swap?

The answer to all those questions above are;

“Would you like to just be the one in control sometimes?”

Absolutely not, it would make me anxious and unhappy.

“Doesn’t it get boring always doing what he tells you to do?”

No. Firstly our relationship is far more nuanced then him just barking orders at me but I like it when he makes the decisions which is why we have the relationship we do.

“How do you stay in character all the time?”

I am not playing a role or character. I am being me, it is natural to me to be the sub within our relationship.

“Perhaps you should spank his bum for a change.”

I did it once, playfully, as we were going upstairs. I don’t really know what came over me but it just happened. Never again mind you, he returned the favour with gusto and I was sore for days which is basically how I like it.

*When I talk about women/men I am using that to mean anyone who indentifies as that gender.

The “Don’t you want to be in control?” question always throws me, because I view submissives as having a LOT of control if/when they are in safe, sane, consensual relationships. But *relationships* is key there, because without that, none of the power play or kinks/sexytime stuff surrounding it works for me.

So identify with all this. No, I don’t want to switch, not even a little bit. I don’t understand the D mindset enough to want to do it, or get any enjoyment out of it. I wouldn’t trust myself in the D role.

It’s an interesting question to be asked, but only once, please because my answer is not going to change.

Giving up control in sexual activities and kink is a release for me as I too am good at telling people what to do – and for goodness sake, i need a break from that. I would hate to see my man as a sub too – just wrong and would lose the respect I have for him – I know some people seem to be able to swap – but i would not be sexually aroused by spanking a guy or girl – but its cool we all like different kinks – Great post x

I don’t think you really read my post properly. I have no interest in practicing on anyone but thanks for the comment

When I saw the topic for KOTW I never once considered to write about myself in a dominant role. It’s just something I would never be able to do, not with Master T or any other man, or woman. I am just not a dominant person when it comes to anything sexual…

I like the playful way you dealt with the topic of this post but I totally get that your answers are firm and carefully considered. I enjoyed your discussion and reasoning.

For modelling purposes you make a most excellent domme – your picture really tells the story – and I have boot, bum and tights envy right now! xx

I agree with every word! I can definitely be I. Charge and in control but NOT as a top or Dom. The idea of it makes me feel SO uncomfortable — like my skin doesn’t fit quite right. The one difference is that I will, from time to time, playfully swat JB’s butt. ☺️

Your post has me thinking, and now wanting to try to write more through this pulled-wisdom-tooth misery that I am in. I hope that I can remember my thoughts and come back to this in another post later. 🙂

Bottom line is yes, I agree soooo much with all you have said (tho I realized I hadn’t even considered myself topping another woman when I was discussing it, lol!) But I draw a pretty firm line between D/s and Topping/bottoming, and although I could never be a Domme – and even truly Topping would be a struggle for me – doing what I call “Topping Under Duress” is occasionally doable. But *only* as a means to further my submission, if that makes sense. Hmm. Like Insaid, some thinks to think about.

That is an absolutely YUMMY picture by the way *drools*

I’m with you, I don’t have a dominant bone in my body. But my mind has definitely changed with regard being dominated by women. And that photo, my knees have turned to jelly!