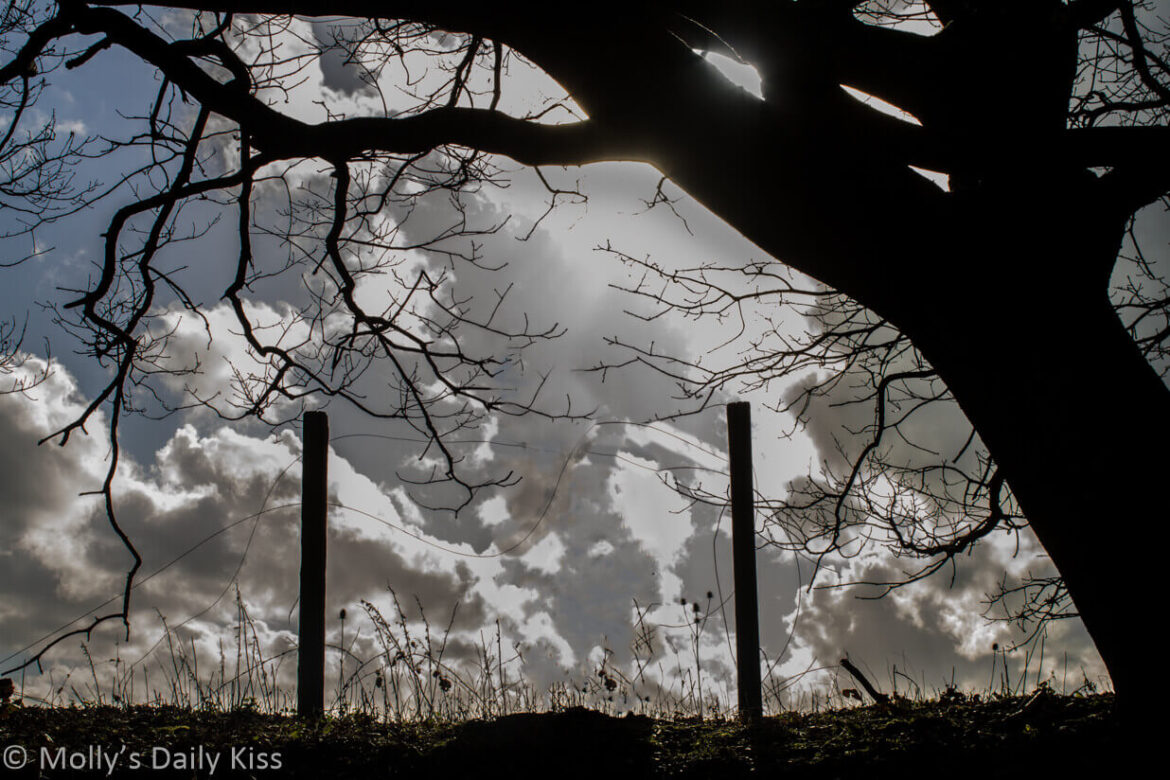 “She was up the ridge this time. All in black, a kind of funny cape thing, and then she did something with her hands and made this spark of light come and then seemed to throw it up in the air”

They all laughed at him

“Yeah right Billy, you saw the town witch and she did a magic spell right in front of you” mocked Alice

“Fuck you” sneered Billy “In fact fuck the lot of you. I am so fed up of you all taking the piss out of me about this. I know what I saw and I am going to prove it to you and then you will have to eat your words” He grabbed his drink, finished it off and walked out on his friends. Although sometimes he wasn’t that sure that friends was the right word but they were the closet thing he had to them for sure.

He passed along this path often. It was not the most direct route but he liked it and having seen her a few times now he found himself walking it even more often. Tonight was later than usual. The sun was slipping down in the sky turning the trees into long fingered silhouettes and casting long deep shadows that accompanied him as he walked. As he got the place where he had last seen her he glanced up but she wasn’t there. With a sigh he walked on. He had his phone in his pocket all ready. He was determined to get her picture. That would shut his friends up once and for all.

He stopped dead in his tracks and listened. He could have sworn he just heard someone call his name but when after a moment of silence he decided he must be imagining things and set off again

“I thought you were going walk right on by me” she said.

Billy was rooted to the spot. Even though he was a good few feet away it sounded like she was whispering right into his ear

“Come on Billy, come up here”

He knew this was his chance to get the picture and so with his hand wrapped round his phone in his pocket he walked back along the path towards her. She slid down off the branch as he approached her black cape briefly billowing out around.

They faced one another and much to Billy’s surprise she was really rather beautiful. He had been expecting an old hag not a dark haired siren. She smiled down at him and he realised he was smiling back up at her in response.

“Come” she said beckoning him towards her.

He had to use both hands to scramble up the bank but he had not forgotten about the picture just, well, the closer the was the better he thought to himself

“You are such a pretty boy” she purred as he joined her on the ridge. “Look at those succulent lips” as she traced a single finger over them. They tingled beneath her touch as if she was passing an electric current through him. He wanted to step back, break the connection between them but he couldn’t.

“What are you?” he asked

She laughed in response

“What am I? Oh Billy, you are so silly. Do people call you that? Silly Billy?”

“No” he pouted at her

“Are you sure?” she teased

“Yes” he snapped back

Her hand shot out from beneath her cape then and wrapped itself tightly round his neck. It was so fast Billy didn’t even see it coming. One moment he was standing there and the next he was pinned tightly against the trunk of the huge tree behind him. He could feel her nails digging into his flesh, like sharp little blades that felt like they might slice into his skin if he fought against her.

“Silly Billy” she said in a sing song voice

“Shall we play a game?” she asked

She didn’t wait for Billy to answer but carried on

“I will ask you questions and you will tell me answers. It is such a simple game. So here goes. Is your cock hard?”

Billy was momentarily stunned at the question and tried to pull away from her hand but she tightened her grip and he gasped as he felt her nails digging deeper into his flesh. He felt himself calm slightly and then much to his shame he realised that his dick was not only hard but that it was throbbing inside his pants.

She looked delighted with his response

His heart thumped inside his chest. He wanted to say no but his brain and mouth seemed to not be working well together and suddenly he heard himself say yes again

With her free hand she unzipped his fly and released his cock from the tight confines of his trousers. Her eyes lit up when she saw it

“Oh my Billy” she crooned at him. “Maybe I should call you Big Billy rather than Silly Billy” and she giggled like a little school girl as she wrapped her hand around his shaft and started to stroke him. If it wasn’t for her tight grip around his neck holding him up Billy was fairly sure that his legs would have buckled beneath him at the overwhelming sensation of her touch. She looked into his eyes as she worked his dick. Watching his every reaction, smiling when he groaned as he sped up her pace.

“Am I doing it right?” she asked with a faux wide eye innocence

Billy’s only response was a strangled moan

“Do you want to come for me Billy?” she finally asked

He tried nodding but her hand on his neck made it almost impossible.

I need you to say it” she said. I have to hear the word

He groaned at her and she let go of his penis and cocked her head to one side contemplating him and then she reached out with just one single finger and draw her nail along the underside of his shaft. It felt like fire and he cried out.

“Say it Billy. Tell me. Just say it and it will be yours.”

She ran he nail along his cock again Even thought it felt like she was slicing him open the need to orgasm was not remotely diminished in fact quite the opposite.

“Please”, he rasped out

“Oh good Silly Billy” she exclaimed and her hand returned to its former position and with just a few firm strokes his orgasm tore through him with such an intensity that he thought he was going to pass out. Her hand left his and she muttered something incomprehensible to Billy and then he was on his knees panting and gasping in front of her. Looking up she seemed to be tucking something away beneath her cloak.

Billy suddenly realised that now was his moment. He reached into his pocket, drew out the phone and swiped at the screen desperate to get the camera mode up and ready. He tried to get to his feet but his legs didn’t quite seem to be working and the next thing he knew he was tumbling down the embankment with her laughter ringing in his ears

Eventually he came to stop down on the path. He looked back up and there she was silhouetted against the sky, the sparkle of light shimmering at the end of her finger. He held up the camera and took the shot.

I got her picture. Definitive proof that I am not making this shit up is right there in my phone” he declared

They all looked at him in stunned silence. Of course it was Alice who spoke first. She was such a bitch

“You are full of shit Bill”

“No. I. Am. Not” he said as he grabbed his phone and found the camera

“See, Look.” he said as he turned it to face them

There was silence as they all peered at his device.

“Are you fucking blind” Billy challenged

“Look, she is right there, sparkly finger and all. He jabbed at the screen and then turned it to face him. His heart stilled in his chest at what he saw. Everything exactly as it had been, the sun, the tree, the clouds, but not a trace of her. He had looked at the image multiple times on his way back. She had been there every time and now she was gone.

When she got home she took the little vile of liquid from the pocket inside her cloak. Semen of a young man was potent stuff but only if given willingly, if they didn’t want you to have it then it was no good. Luckily she knew exactly how to get them to give her to her willingly you just had the find the right candidate to play the game.

“Hey Billy, what’d do to your neck man?” asked Jack as Billy sat at the bar nursing the pint of larger his friends had bought him when he had collapsed pale and shaking at their feet.

Billy reached up and touched the marks on his neck. They felt hot and tender to the touch and much to his shame his cock twitched in his pants as he ran his fingers over the marks.

She giggled to herself as she felt her fingers tingle. Oh Yes, Silly Billy had been the perfect candidate and unlike most of his predecessors she was fairly sure he would be back for more.

Someone to watch over me

Love witchy stories Molly and this was great!! 🙂 xx

Ooh lucky Billy! He definitely met a wicked witch – I’m intrigued by what she is planning to do with his ‘donation’….

Oh cunning and sexy and slightly sad because Billy was so vulnerable. I thought the twist was that she’d stolen his manhood, but I loved what you did with this tale.

I feel a bit bad for Billy. I agree, his friends are shit to him. Perhaps him finding his way back to the witch would be better for him.

Dump the friends, go to the witch…for all his frustration about the picture, he certainly seemed to have a better time with her.

I really enjoyed this and am interested to see where your story goes next so I hope that you will continue with it ?