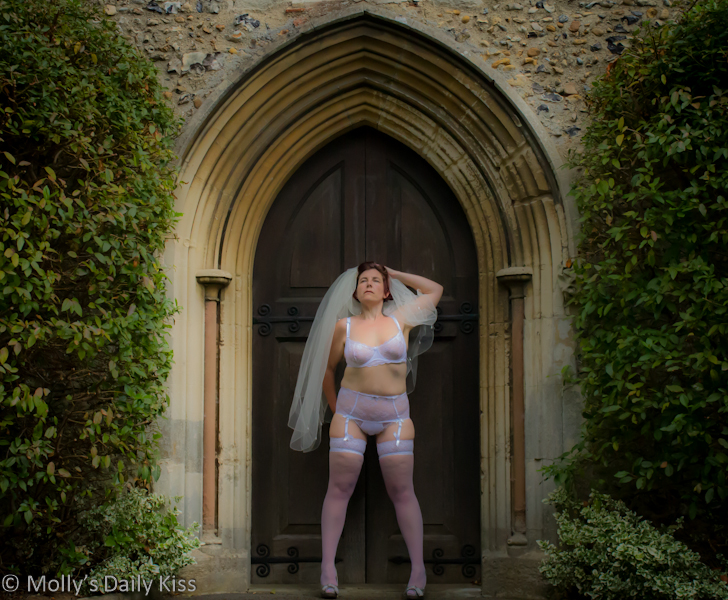 I never wanted to get married in the first place. It was you who was so fixated on the idea. For reasons that now I can’t even remember you explained why it was so important to you but as the day big day got nearer and nearer I started to realise the only person this wedding was really important to was your Mother.

I should have stopped it weeks ago. I know that now but I loved you and wanted to do this for you and after all this was important to you, wasn’t it? All the pomp and ceremony, the dressing up and the church. You trotted along quite happily with all your Mother’s plans, explaining to me that she liked to treat us, that if we agreed to her ideas then she would be more likely to leave us alone after the wedding. I didn’t really understand what you meant by that but it seemed important to you, so I gave in.

As the weeks went by I watched the two of you together. At first it seemed like she was a doting, overly invested Mother. She only had you after all and she seemed happy that we were getting married. She was sweet to me, although ridiculously bossy, but I didn’t really care so I let her have her way with the invitations, the colour schemes, even the dress.

I would have picked something very different, I wanted the 1950’s dress, with the halter-neck, the tight waist and the full petticoat skirt. I even went to the shop one day without her just to try it on. It had a bright red sash that tied round my waist and I picked the matching red petticoat which peeked out from beneath the pure white skirt like it was advertising all my dirty secrets. Little did I know then that the one with the really dirty secret was you.

As the days progressed you became more and more distant from the whole thing. Refusing to talk to me about any of the plans and even snapping at your Mother every time she came round to see us which finally ended up with you asking her to leave one night. As you showed her to the door she turned and hugged you. I was fairly sure she whispered something in your ear but if she did you never acknowledged it but instead pulled away and wished her goodnight. She left with a sigh and the parting words of

“You will see I am right about these things Robert”

Your response was to shut the door in her face. I watched the whole thing from the kitchen. I knew it meant something but still couldn’t figure out what. I tried to ask you if you were OK but just like with your Mother you acted as if you couldn’t really hear me. Instead you took me by the wrist, led me to the bedroom and with methodical cool intent undid your belt and fly, draw out your already hard cock before spinning me round, lifting the back of my summer dress and pushing yourself into me. This was the Robert I loved. The powerful man who demanded I never wear knickers, who used me for his own physical pleasure, who spanked me because it made his cock hard and my cunt wet, who would tie to me the bed and leave me there for the whole evening while he sat in the corner of the room alternating between reading a book and telling me all the things he planned to do me later until I lay in a puddle of my own desperate juices and begged.

The night before the wedding we had agreed to stay at your Mother’s house. She was adamant that we could not possibly spend our pre-wedding night together and made a joke about needing to keep an eye on us. We were given separate rooms, you in your old childhood room at the top of the house and me in the guest bedroom right next to her with my big white monstrosity of a dress hanging from a hook in the ceiling which your Mother had told me earlier in the day she had got her Handyman to put in especially for that purpose.

I slept well, for the first half of the night anyway. What woke me I can only guess at, but once I was awake I couldn’t stop thinking about you tucked up in your little room alone and so I decided to come visit. I assumed everyone else was sleeping so I slipped on my t-shirt and tiptoed up the darkened staircase. Before I even reached the top I heard your voice.

“No Mother, no more”

“This will be the last time, I promise.”

“You said that last time and the time before, I am getting married tomorrow and you might have made this wedding into your own fantasy but my marriage will be mine and I refuse to let you sully it with your dirt”

“You never said it was dirty when you younger. You liked it then, when I came to your bed.”

I didn’t hear your reply. I didn’t need to. Instead I returned to my room, crawled into the bed and listened. To my relief it wasn’t long before I heard footsteps followed by the soft click of the door closing as she returned alone to her room. I spent the rest of the night laying in that bed listening, just in case, staring at what had always been her dress and plotting what I was going to do next.

Removing the dress in front of everyone had not been the easiest of tasks but when the priest asked if anyone knew of a reason why we shouldn’t get married it seemed like that was my perfect moment. The whole place watched in horrified silence as I finally managed to get the zip down and stepped out the dress. Scooping it up in my arms I walked proudly to the front pew and laid it perfectly across your Mother’s lap.

“I hate this dress. ” I whispered as I leaned forward and kissed her on the forehead mimicking what I had seen her do to you thousands times before.

“So Robert, are you staying here with her to be controlled or coming with me and being the one in control?”

I knew, in my gut, that is wasn’t much of an offer but a little spark of doubt that I might have misjudged you did crept in as I saw you look over at her. I needn’t have worried though, at the end of the day she had nothing you really wanted and I had everything.

Oh Molly the complete pervert in me loves this story!! Great image and that underwear is GORGEOUS!!!!

This is just brilliant. I have no other word for it! Love the photo too, but the story is brilliant!

This was an amazing read. Got totally sucked into it (which doesn’t happen to often because of my attention deficit) and then the photo was a beautiful visual to add to the story.

Great story to illustrate that picture (or was it the other way around? :)) – nicely done Molly, as ever

Dear Molly, it took me a while to work out where the story was coming from, but it was worth the wait 🙂 x

I’ve seen that doorway somewhere before…how brave are you! But that underwear is stunning!

Both story and photo are great.

Your writing impresses me more and more with every read.

Fantastic story Molly really got into it. The image at the end is fabulous though too. What gorgeous underwear!