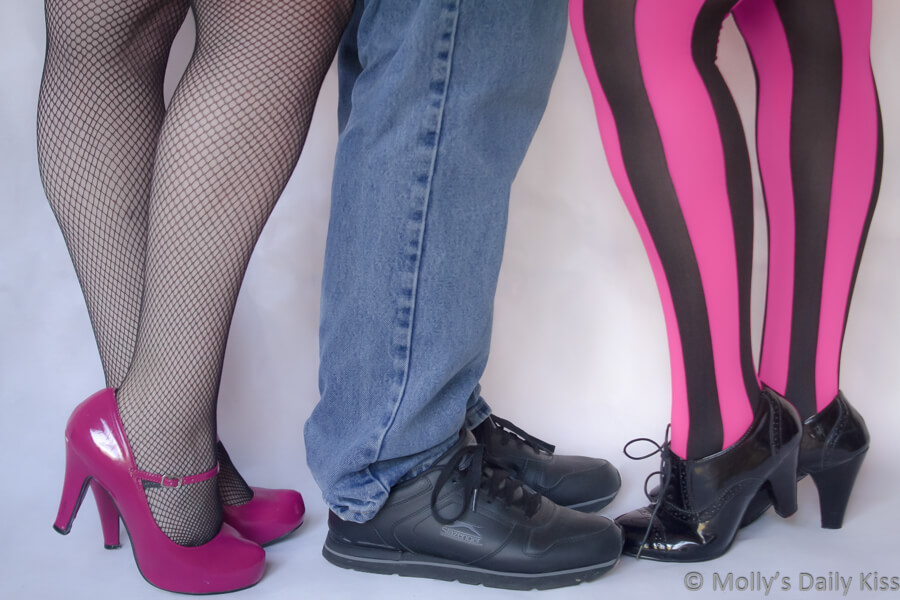 That night I got to kneel in front of two men, holding a dick in each hand and then taking turns to suck them both. At the time it was one of the sluttiest filthiest things I had done and to say I loved it would be an understatement. The evening ended with me on all fours on the bed sucking off the guest while my partner fucked me from behind. I am not keen on the term spit-roast but for want of a better name that is exactly what it was and it was sexy as hell.

This memory is definitely one of my sexual highlights from that relationship.

I had my first FMF threesome with the same partner. We met her on a Swingers website, she suggested we meet for a drink and when we invited her back to my house she accepted. What ensued was a seriously hot couple of hours of fucking and sucking. However during the next couple of weeks after that encounter she pursued my then partner relentlessly. She even turned up at a swingers club one night when we were there having seen that we had put our names down to attend on an events page. I told my partner if he wanted to fuck her I was OK with it and when she followed him into the pool he did make out with her but when I appeared he made his excuses and got out. When I asked him what was going on he told me that some of the things she said just made him feel uncomfortable. It was only later that night when he got home that he revealed that she had made it very clear she had only come to the club to find him and that she had suggested that they could sneak off to her place together.

The moral of the story here is that be very sure about the person and what their expectations are before getting down and dirty with them because they can seem totally cool when in fact they are not.

Fast forward to more recent times and my relationship with Michael.

Since then we have pretty much stuck to the monogamy part of our monogamish status (monogamish = being mainly monogamous especially in terms of romantic attachments but might be open to exploring with others if the possibility arose) and for the most part I am actually OK with that.

When it comes to MFM threesomes things are a bit more complex. Michael has written extensively about his jealousy issues when it comes to men. This is not just a little bit of the green-eyed monster either; this is a visceral reaction that comes from past traumatic experiences. Even though he can rationalise verbally that it is illogical, after all he would be fine with me having sex with another woman and I am fine with him having sex with another woman, the emotions he experiences are painful, overwhelming and uncontrollable. Seeing him try to battle them for me makes me love him all that bit harder because he wanted to give me the opportunity but I also found it hugely distressing. The one time when we even dabbled in that arena was the closest we have ever come to losing our way as a couple and despite the fact that the idea of a MFM threesome really is a huge turn on for me knowing that it has the potential to cause untold harm to him and ultimately to us makes the reality of actually doing it a far less sexy. That does not mean I don’t still find the idea of them sexy and that they are not often part of my masturbation fantasies but for now at least that is where they will stay.

However, FMF’s are a big turn on for both of us and they feature regularly in our sexual fantasy talk during sex and the idea of watching him fuck another women quite literally makes me wet. If the opportunity arose again with the right person and that really is the key detail, the right person, then we would definitely both be up for it. However as anyone who has ever considered, let alone managed to have a FMF threesome finding a woman who wants to join a couple is not an easy task but as my track record shows it is also not impossible.

I am so pleased you covered this subject as one of the things I dream about is MFM, and also FMF but I am aware of my jealousy issues as well. I like the depth of information you gave here and the interesting fact that the other female who you miss became such an important part. Your post is making me both want it more and also the pitfall that could occur

I really love the image. It’s quite striking and the colors are really well thought out 🙂

Thank you, the image was a new editing experiment which I will be trying again in the future

MFM and FMF are such fascinating dynamics. A beautifully written piece Molly. Thank you 🙂 x

This is a really interesting, thoughtful post – thanks for sharing so much of your perspective on the subject. It’s a great photo too – this will sound like a backhanded compliment (and I promise it’s not!), but I feel like it could be used as the stock image for a magazine article on threesomes! It captures something about their essence really quite perfectly.

Thank you and I can see what you are saying about the image. I was actually playing with a new editing technique and this was my first attempt which of course taught me all the things I did wrong when taking the two images but sadly I did not have time to reshoot but I do plan to play around with the technique some more with other image ideas so watch this space

I enjoy seeing the different aspects and hearing what worked for others. MFM has always been a huge turn on for me. Of course you are correct all parties must mesh or the results can be disastrous. the monogo ish part I totally understand

Thank you for sharing this wonderful piece

While for me at least, the reason I’m not attracted to MFM is simple straightness. There’s nothing I could do with the guy except ignore him as politely as I can. And it just strikes me – I mean for me only, not in general – as an excruciatingly awkward social situation.

(I find my straightness limiting and kind of embarrassing since I’m supposed to be a libertine. But I did experiment, and it only confirmed that I really don’t fancy men. It makes me a worse partner for a girl who wants to experience a MFM, except that I’m prepared to help her find two other guys, and I’m guaranteed not to throw a tanty or a moody when she gets back.)

Anyway, it’s a huge topic, and it crosses into so many issues. My feeling is that the person who is the minority sex, the man in FMF, or the woman in MFM, is the host, and should take on a subtle leadership role in making sure everyone is happy and no-one feels they’re left out. And everybody should be on their best manners.

Oh just to clear I like my men straight too and I have no desire for them to indulge in direct sexual activity. For me a MFM is all about the sexual focus on me.
Mollyx

As long as they’re done right, threeesomes are so much fun. I’m not really wanting another MFM although I would like the DP experience and I’d prefer it if the guys were bi but that’s not going to happen for me either. FFM I would happily repeat time and time again though 🙂