“Where are we going?”

Hmmm, I have heard that before and it has lead to some interesting experiences I can tell you.

Now, before I carry on with this little ditty, let me tell you, America loves food. No, that doesn’t do it justice, America ADORES food and in general I have found they do it surprisingly well. It might not be haute cuisine, but then a lettuce leaf and a prawn in exchange for vast sums of money is not really food and it’s certainly not food American style. Food American style is BIG and in general messy, well it is in Philly. If it doesn’t come on the plate the size of the Isle of Wight then it comes in a napkin and it will dribble down your chin and onto your cleavage and on some occasions it will even seem to explode before your very eyes, just like my waist line.

So on this day in question we had already had a breakfast  at the diner in South Street which for me had been sausage, egg, bacon and toast…..without the French toast this time, which although deliciously wonderful is served in such portion size as to beyond my capabilities. After bidding a final farewell to Gearjammer it was back to the hotel for some packing and then killing some time before relocating to our new abode.

“Here we go” ….he grins at me and the next thing I know I am seated outside another food establishment….

“But this isn’t food, this is S’mores” he replies. 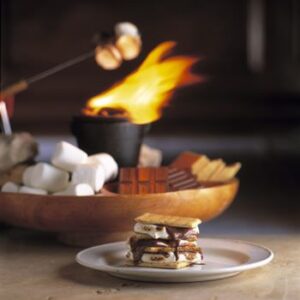 I know that you ‘Murrican’ will know what a S’more is, but for those of you who don’t, let me explain. S’mores is basically a marshmallow and chocolate biscuit sandwich……that you construct yourself. Apparently they are traditionally camping food, not the mincing around and air kisses between feminine men type of camping but the tent, fire and peeing in the woods type of camping. They come served on a tray with an itsy bitsy little camp fire in the middle. You get a pile of Graham crackers (For my UK readers, Graham Crackers are a slightly crispier and sweeter version of a Rich Tea biscuit) a pile of marshmallows and a slab of Hersheys milk chocolate, oh, and I nearly forgot the wooden skewers, which you use to toast the marshmallows over the teeny tiny fire. Once toasted and melting (or in some peoples case burnt and smoking) you sandwich between 2 of the crackers (biscuits in case your still confused) along with some of the chocolate, and eat…….

Now in all fairness to S’mores, they are actually rather wonderful and whole process of making them was great and if I had not already eaten a breakfast the size of a small mountain then I would have wolfed them down with relish, but I had eaten…..lots……and yes people let me tell you, this felt like death by food.

As I bite into this culinary creation, the cracker splits and my carefully constructed S’more explodeds in my hands and there is chocolate and melted marshmallow everywhere, I look up and he is chuckling…… “Problem slutmine?”

Through a muffled mouth full I reply…… “No Sir, I just think I am going to die”

LMAO Oh so good Molly I could imagine it, must say sounds disgusting and definitely do not want to try one. But can just see it exploding in your hands.

Fair return for feeding me that Mar-mite….