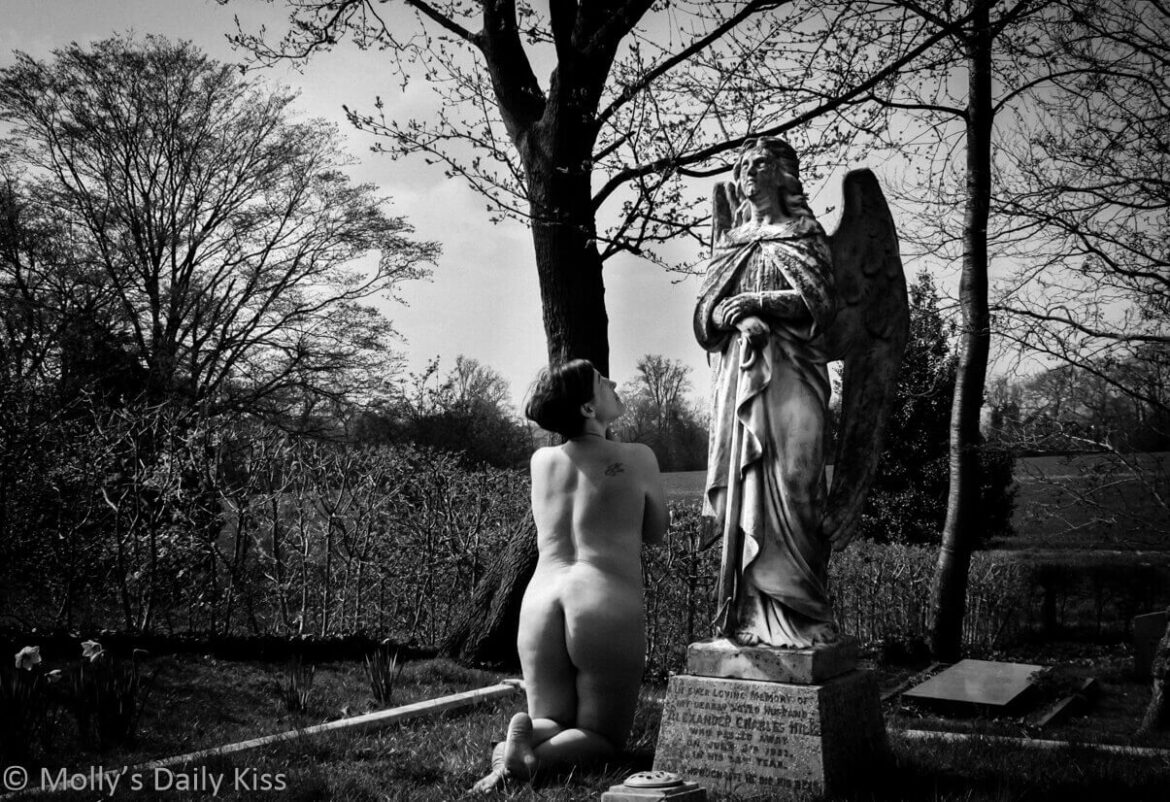 “An angel’s arm can’t snatch me from the grave; legions of angels can’t confine me there.” ~ Edward Young

Don’t you think she is creepy as fuck? Look at her face, there is nothing soft or benevolent about it. She looks upwards to the heavens but her mouth is set in a straight line. Nothing she sees pleases her and the way her arms are crossed, she is not offering welcome or comfort not does she appear to be offering safety. She is not here to protect or to guide but to stand in judgement of all that she witnesses and those formidable wings identify her, or actually maybe that should probably say him or possible they as the gender of Angels is a hotly debated topic, as that most sinister of creatures, the angel.

There is a very good reason that stone angels were used as terrifying monsters in Dr Who and that is because they look like sinister motherfuckers and churchyards in the UK, particularly old ones, always have at least one or two of them. I guess they were of their time and I really should look more often to see if they were a fashion of a certain period. The one in the picture says 1932 which means it has been standing surveying this church yard for 86 years. I wonder if I am the first naked body it has had the pleasure of seeing?

I have no idea where my love of Graveyards/cemeteries has come from. He says I have a morbid fascination with death a bit like the Victorians did; I love the Egyptian Mummies in the museum and skeletons and specimens in jars, the picked brains and eyes etc. There is something about the grotesqueness of it all that captivates me. I am both fascinated and terrified of it all at the same time. It makes my heart race and that in turn makes my cunt wet. I think it is my version of roller coasters, that heart racing experience that leaves you both scared and excited. Maybe death and the culture of death has a similar effect on me.

There is also something seriously hot about the corruption of it that is a huge turn on to me. Graveyards are meant to be a place of reverence and in this country are commonly found attached to churches and so there is that added thrill of perverting religion as well as death. I have often fantasised about seducing a vicar, getting him to fuck me in the churchyard up against an angel or a big old tomb delights me with how utterly filthy that would be. Can you imagine the torment that man would go through? I hope it would fire him up even more and make him even harder at the thought of the wickedness he was perpetrating. See, I like perverting things, I like being provocative. It makes my cunt wet.

But ultimately I think my graveyard fetish is about defiance both of acceptable behaviour, but even more so defiance of death. Laying down in the soft grass behind the rows of gravestones, spreading your legs and wanking yourself off really is a fairly big fuck you to the old grim reaper although I am fairly sure he is just lurking round the corner watching me and furiously wanking underneath his deathly robes.

I agree about their faces and i too have such a weird fascination with graveyards and churches. I think the fucking thing is how alive you are when fucking, in contrast to the death around you – and the naughtiness of it too 😉 x

There indeed is something fascinating about old graveyards, I think for me because of the history, and wondering what the stories are of the people lying there. Love this image of you! I still want to get naked in a graveyard one day, but haven’t dared to do so up to now…

I enjoyed your take, Molly, and the image is super.

I’m extra leery of graveyards so I can’t say I’ve reallt looked at the angels. The whole thing makes me anxious and I can’t explain why honestly. Your photo is fabulous

I think graveyards are fascinating. This is a beautiful photo of you, the angel looks a little severe and disapproving though!

I’m one of those people who have always been uncomfortable at the idea of taking nude photos in a graveyard (or a temple, or a church, etc.) – but your last paragraph where you say that it’s a defiance of death itself makes me see this in a completely different way that I’d never considered before. I’m 100% with you on the morbid fascination thing, though… I also can’t get enough of cemeteries, scary stories, and creepy crawlies.

I LOVE this picture of you. I am not drawn to graveyards in the same way as you are but really enjoyed reading this and seeing them from your point of view 😊