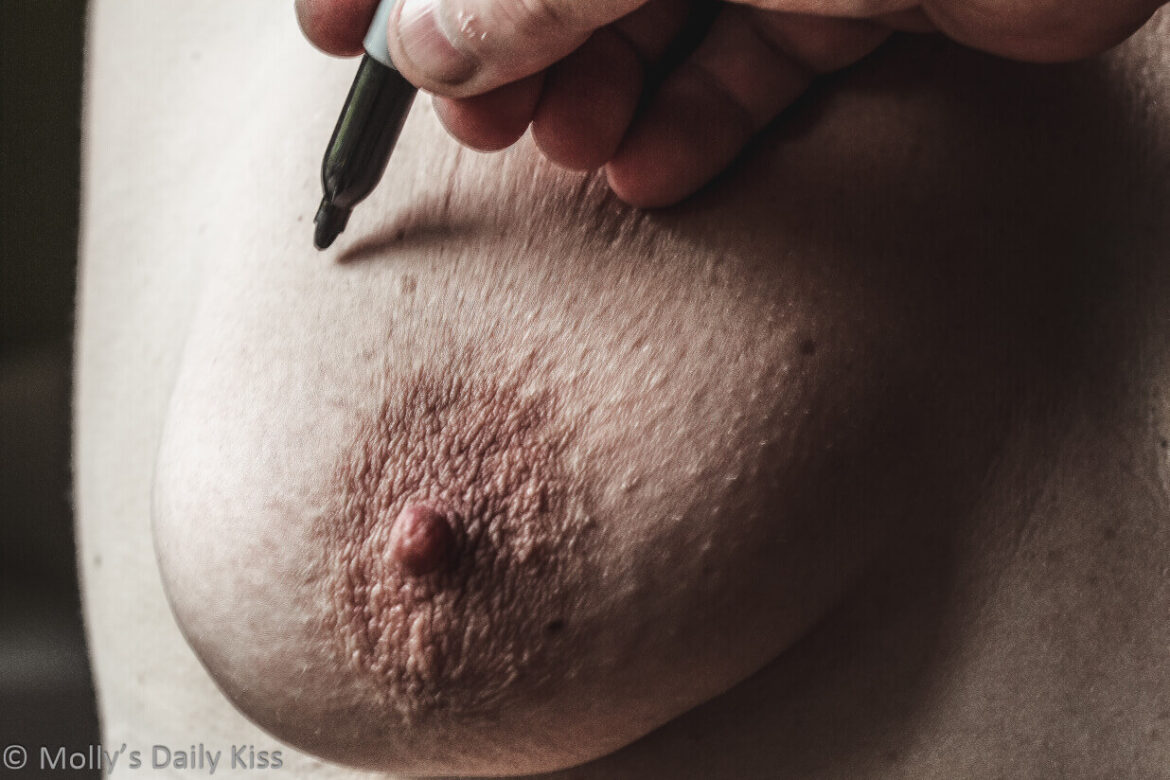 The cuffs round her wrists and ankles held her firmly in place spread-eagled on the bed beneath him. He contemplated her bare smooth flesh for a moment pondering where to start, then bending forward over her he bought the pen down on her skin and wrote…

As you can see I decided to get you something very special. I have nipped out to get some beers and food for later. I will be about 2 hours. Grace is all yours for that time. Enjoy her as you will. I have left some bits on the bedside table that might be useful and it’s totally up to you if you want to remove the gag or not. I just wanted to keep her quiet while she waited and give you a chance to read this without her interrupting. She will definitely put up a fight but I know you will like that. I am sure she will be sore and subdued by the time I get back. Her safe word is cabbage, is she uses that then you need to stop, if not, then feel free to ignore any of her other protests and have it my friend. I made sure she was wet before I left.

Beneath the blindfold Grace could feel the pen making its way across her chest and breast down onto her stomach and even onto one thigh. She had no idea what he was writing and every time she asked he told her to be quiet he was concentrating. In the end he picked up the knickers she had been wearing and forced them into her mouth to silence her.

Hearing him leave the room didn’t bother her that much but the unmistakable bang of the front door moments later made her heart leap in her chest. She strained to listen for him, knowing every creak and squeak of the house they shared together but the only sound was her own breathing and the bed beneath as she shifted in her bonds.

She couldn’t believe he had left her here like this and gone out.

Simon texted John as requested when he arrived at the house. The text he got back said….

The door is open, let yourself in. Your gift is upstairs in our bedroom. I am just out getting beers. BBS.

Grace heard the door open. She wanted to call out for John but the panties in her mouth meant all she had was a muffled cry. She could feel the heat rising in her core, a mixture of anger and lust throbbed through her. Fuck he knew how to press her buttons. The door of their room opened and Grace pulled harder on the restrains swearing and cursing into the material stuffed into her mouth but then she felt a brush of finger tips on her cheek and then across her lips and a gentle shhhh sound coming from his mouth and then he started to read aloud the words on her flesh and her body turned to a pool of liquid heat as she realised that not only was the man in the room not John but that it was Simon and she was to be his birthday gift.

Her heart raced at the thought of being along with this man for two hours, disgusting images of the things he might do her flashed through her mind both thrilling and terrifying her at the same time. She had told John she fancied him but she had never expected that he would do this to her, give her away like this, let this man use her. Her cunt throbbed at the thought but rage burned through her at the same time.

As he peeled the blindfold from her face the light made her blink as she tried to focus on his face. He smiled down at her as he reached for the knickers and pulled them from her mouth

“Get me the fuck out of these cuffs you arsehole” She growled up at.

He contemplated her for a moment and then with a glimmer in his eye reached down, undid the buckle on his belt and pulled it out through the loops on his trousers.

“That is no way to speak the birthday boy is it Grace?” he said as he wound the belt round his fist.

Languishing in the moment

It’s all in the wrist

masturbation monday/the gift
I love to read and love to know about sex more and more.And i am glad i found this website and really thankyou for putting your effort and passion on this subject.
I love the topic and i feel like it is going to happy ending instead the girl have such a horrable day ifeel bad for her. so with this i come to know the guy is pritty much trying to do horriable and like couple exchange sex with the girl without her permission which i fouond is really rud. Anyway i dont thing this thing will happen in real life. Anyway the writer really make a good stroy and love it but again feel realy bad to that girl.
i am a kind of guy who love to experss sex with the passon from both understanding and make a happy ending having say that i am not completely ingnoring that there wont be people who dont like the oposit of my mind set there will be.
Buy i love the fact that the ficton is really awsome and looking forward to know the part 2

Thank you for your comment. I think you might be a tad confused about my piece. If you notice her partner clearly states what her safe word is. In kink relationships the safeword is a way for the submissive to stop play without having to use the words, no or stop etc as those are often a turn on to both people. This is absolutely a consensual scene on everyone’s part. As for doing it in real life, I would totally be up for something like this but I know many others would not.

Wow…the suspense of it all! I was on the edge of my seat reading this. I would love to read more too!

Oh, Yes! I would be soooo pissed if my man did this, but it is exactly the sort of thing he would contemplate. And even through my anger, I’m sure my body would betray me and reward me by submitting. It’s a hot little story, Molly!

What a nice presen is your story, thank you! X

I am totally with others before me… more, more, more!

Very edgy Molly, the excitement and anticipation built beautifully. I wonder if there will be more, or is it all part of the tease?

Mmfff
I loved the buildup, this is such a sexy story – adding my voice to the pleas for a Part 2!

But she didn’t say “cabbage” now did she? Love this!

That is quite a birthday present!

[…] Grace heard the door open. She wanted to call out for John but the panties in her mouth meant all she had was a muffled cry. She could feel the heat rising in her core, a mixture of anger and lust throbbed through her. Fuck he knew how to press her buttons. Read more. […]

This hits on the some of my favorite fantasies. But leaves it open to the imagination at the end. I’m eager for more.

[…] hits some of my fantasies. Being shared, willing yet not certain. The Gift from […]