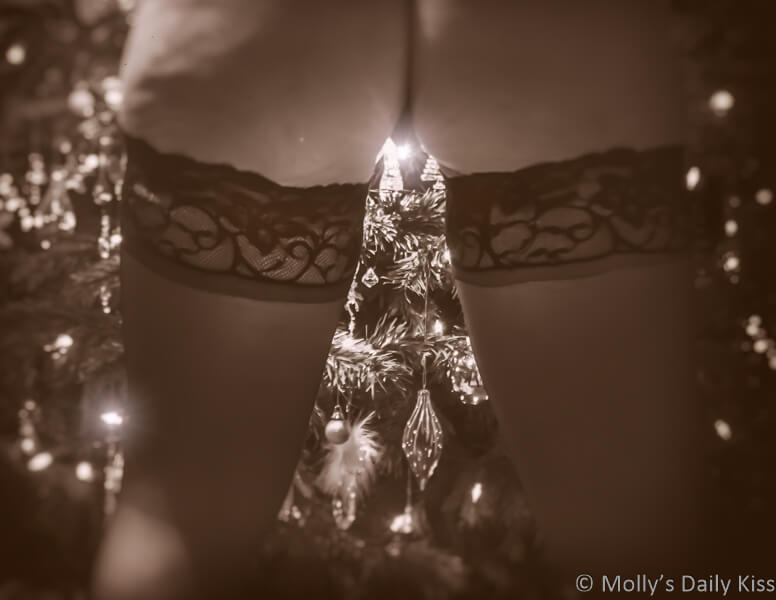 Every little girl wants Santa to visit them and Stacy was no exception. Every year she would dress up on Christmas Eve, pour herself a glass of Baileys and fuck herself stupid to the thoughts of the ultimate Santa Claus coming to visit.

Every year for the last few years her sister had invited her to her house to ‘enjoy a proper family Christmas Eve’ and ‘after all Christmas is about kids, Stacy’ and every year Stacy would roll her eyes and decline the offer saying that she liked her Christmas Eve just the way it was thank you very much. Stacy had no desire for any kids unlike her sister who had filled her house with four snotty nosed little brats and now seemed to spend her entire life trying to get people to come round and ‘spend time with the little ones’.

Stacy would turn up tomorrow, give out gifts, eat the food and then fuck off back home by nightfall but tonight, tonight was her time and she intended to enjoy it.

Most people think of Santa as a jolly old character, with a round full belly, a long white beard and hair, red cheeks and a hearty laugh. A Grandfather figure but that was not what Stacy imagined when she thought about Father Christmas. No, to her he was tall with dark hair that was peppered with silver grey and short stubble across his face to match. He has dark intense eyes that twinkled not with joy and compassion but with knowledge and intelligence. He was thick set, broad strong shoulders and biceps and forearms covered in a dusting of dark hair and large workman’s hands, clean, short nails but with that roughness that shows he was no afraid to use them.

He wore the clothes you would expect a Santa to wear but he just wore them differently. They looked right on him, they fitted his frame and on his feet his wore big black workman style boots that were partly laced up and round his waist, holding up his trousers a thick black leather belt. When Stacy thought about that belt and what Santa would do to her with it she could feel the first of her Christmas Eve orgasms bubbling beneath her fingers that were nestled in the folds of her cunt.

Stacy’s Santa was a strict fellow who liked to make bad girls pay the price for their misdemeanors and if they accepted their punishment well then they go their rewards too although working out which was which might be tricky to some people but not to Stacy. To Stacy Santa was the ultimate Daddy, strict, knowledgeable, handsome in a rugged slightly older man way, but he also had a darkness to him, one where he got off to hearing her cries as he beat her arse with the belt, where the sight of her tears as he shoved his cock down her throat made him rock hard and the sound of her begging him to let her go made his balls tighten as he emptied himself into her cunt. Stacy’s Santa was generous with his gift of pain and discipline. He understood that hair was meant to be pulled, wrists were meant to be bound and legs were meant to be forced apart. He knew that Holly was not just for decoration and all Christmas sluts looked their best when covered in bruises and come.

Stacy came again, coating her fingers in her own sticky juices.

Brilliant loved that especially –
“all Christmas sluts looked their best when covered in bruises and come.”
I spent one Christmas alone with my man – and he was a bit like she imagined her father xmas that day. It was great! x

Great and nicely menacing read Molly, I also adored the picture. My brain did the classic inversion of the image – thought I was looking at an intricate xmas bell at first then realised it was been your sexy stockinged legs!
Indiex

And now I will never NOT picture Santa as the ultimate sexy Daddy of my kinky fantasies. Gawd, I think I love Christmas Eve again, too! 😉

He knows if you’ve been bad or good… Naughty Santa. 😉

[…] Every little girl wants Santa to visit them and Stacy was no exception. Every year she would dress up on Christmas Eve, pour herself a glass of Baileys and fuck herself stupid to the thoughts of the ultimate Santa Claus coming to visit. Keep reading. […]