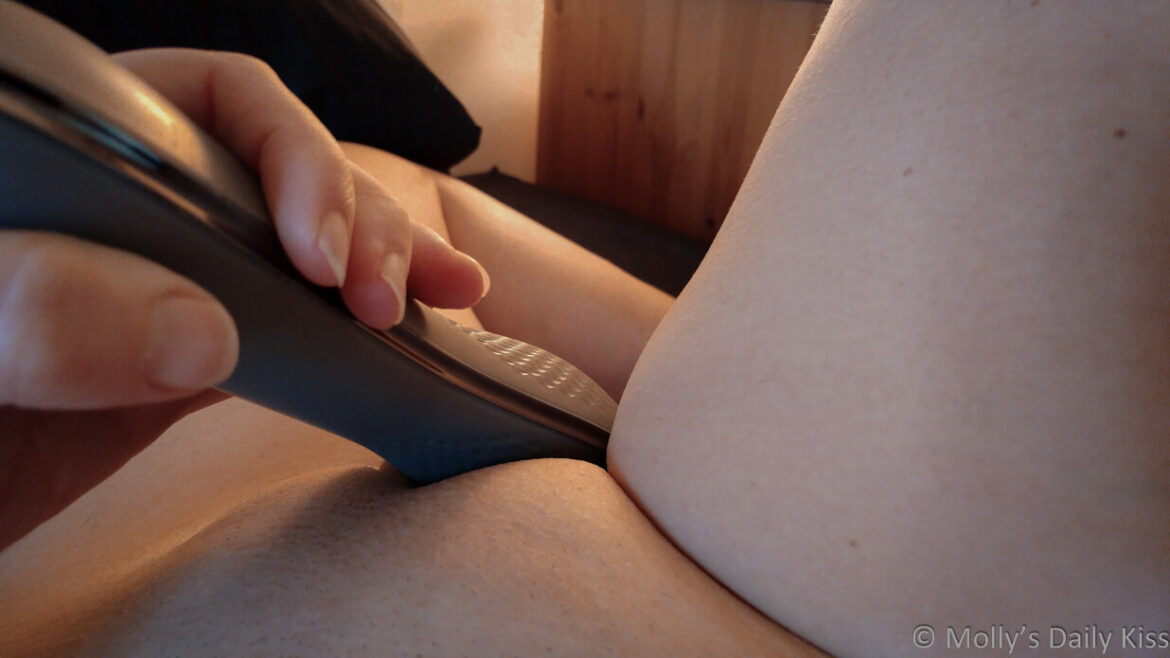 It has arrived a few days ago. We had opened it together, passing it between us as we tried out the controls feeling it buzz in our hands. In the end he decided to give it a proper charge and so it sat in the corner of the kitchen for a few days. Not that it took a few days to charge, far from it, but real like kept getting in the way and so it seemed to be forgotten until it wasn’t.

“Come over here Slut” he was standing in the middle of the front room holding something in his hand as I came down the stairs. As I got closer I could see it was the nearly acquired Queen Bee in all its sexy sleek glory.

“I want to watch you” he said pointing at the sofa where he had spread out a blanket.

A little shiver of excitement rippled through me and I grinned up at him.

“Now?” I inquired all big eyes and innocence.

“But it’s the middle of the day and anyone could see in.”

“And we have curtains and the time of day never stopped you from being filthy before.” he teased back.

I slipped my leggings off but left on my jumper and socks. Orgasms are easier for me if I am not cold. I laid back on the sofa and looked up at him. He handed me the Queen Bee as he settled down at the other end of the sofa, one leg hooked up so that he could turn his body and look directly at mine.

I switch on the toy, it emits a soft rumble sound and I trail it across my thighs and pubis just playing it across the skin. It feels good. I let it slide between my thighs grazing it across the outer lips of my labia and then again, the same journey until I can feel my clit starting to respond, pushing up from its place at the top of my cunt. I use my fingers and open myself wider to give the Queen Bee full access to my clitoris. I let out a little groan as I push the throbbing toy down.

I am a girl who tends to like very direct clitoral stimulation and so I have wondered if the this sex toy would work for me seeing as it had a large flat head that didn’t seem to lend itself well to finding just THAT right spot but it seems I need not have worried because damn this thing feels good. I press the button to up the vibrations a notch. It throbs in the most delicious way between my thighs and I find that if I press down slightly on one side (to the right of my clit) and work it into that hard nub of flesh in a kind of rocking motion my cunt spasms in response.

My eyes are closed and I am concentrating on what it feels like but at some point I have closed my legs slightly. His hands feel cool against the heat of my skin as he reaches between my knees and slowly pushes my legs open

“Keep them open” he mummers and he leaves his hands resting there just in case I should forget that he gets to see. I glance up at him, his eyes are studying my cunt. I feel exposed and open. Him holding me legs apart makes me feel dirty in a way that alongside the feel of the Queen Bee has my orgasm already bubbling just beneath the surface

He looks up at me

“I can smell you” he growls “My dirty little bitch, legs spread, showing herself to me”

Later we snuggle on the sofa together. We are now both naked, the taste of his come lingers on my tongue and I am fairly sure his fingers must smell of me.

“I think we can declare the Queen Bee a keeper don’t you?” he says.

“Well yes, but surely we should use it a few more times just to be absolutely sure.”

“Greedy slut” he whispers into me ear.

But later I notice he had put the Queen Bee onto charge again and when we go up to bed that night he bought it with him….. just to be sure.

The scent of him

I will always be there

Every Story Tells a Picture

The taste of you

Hot writing but that photo is off the scale Burning Hot! x

Such a sexy interlude to your daily life. I love it when these moments happen and your words and the image that goes with them are super hot. 🙂

Unf. Being watched is unbelievably sexy. You definitely told this story expertly.

Oh gawd, having to keep your eyes open makes me feel so vulnerable. And also, I loooove the Queen Bee! I’m glad you do, too.