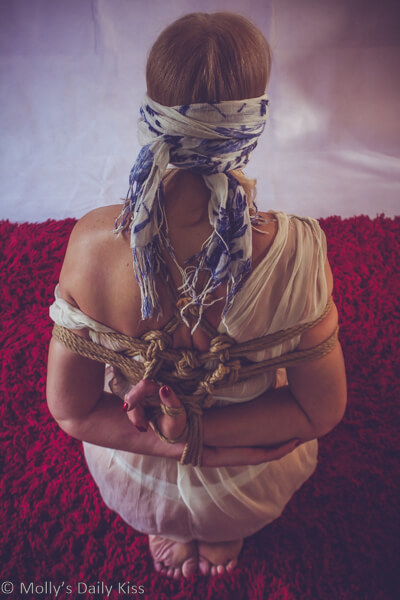 Back in January I wrote about a rope bondage project I had been involved with. I spent the day taking photographs of my beautiful friend @Hopealways2 being tied by Djfet74 as part of her; A Cunning Plan, project. You can read all about it and see just one of the lovely pictures I took on this post Smash the Mold.

At the time I invited @HopeAlways2 to write her own piece about that day and I am delighted to say that she has done just that. This blog is very much my space but no one operates in isolation to anyone else and I love it when other people who share my life and experiences write about it. This is most definitely Hope’s writing and her thoughts and experiences but knowing that I took an image that captured the whole experience for her is very satisfying to me, not only on a professional level as a photographer but on a very personal level as her friend.

A couple of weeks ago Molly sent me some images she took of me back in January when I had my very first personal experience with Shibari/ kinbaku. In particular Connective Rope, for a project being set up by a lovely friend @Djfet called A Cunning Plan. To say I was stunned speechless and totally blown away by them would be an understatement. I remember sitting with Molly, Michael and @Djfet having a quick look through those images after the sessions and one stood out like a beacon. I mentioned to Molly a few days after, that I hoped one particular image would make it through the editing stage, although I didn’t tell her which one or why.

So I am going to share that image with you and try to explain what happened to me at that moment and what the image represents to me.

The riggers among you will probably notice the aesthetics of the rope. The photographers the composition of the image. The D/s among you the position of submission and what that may represent to you.

For me It symbolises the beginning of the end of a long and sometimes very painful journey. Between January and April 2009 My world shattered not once but three times. The stress of that time magnified the symptoms of the early onset of the menopause I was already experiencing and it hit me like a freight train. I was a wreck, empty. I spent the next year sifting through the wreckage deciding what parts of my life to discard or keep, those shards I was unsure of I placed in a metaphorical box to decide on later. I functioned on auto pilot, I cared for my family, went to work, did what was necessary. One thing I didn’t do much of was care for myself or sleep much, so I lost myself in the world of books. According to my library record of that year I read 64 books, that doesn’t include the ones I brought from the local charity shops. It was one of those books that woke me up.

While reading it and finding myself more and more intrigued by the story unfolding. There came a point where I had a deep down gut reaction. Like an elastic-band going ping in my abdomen. It was not a new experience for me it was however one of the feelings I had left in my metaphorical box because I couldn’t bring myself to trust it any more. However that feeling lingered, so I started to investigate further. A long story short, it led me to the wonderful world of kink, FetLife and some of the most amazing people who inhabit it. It was something completely new and unknown. It became the bedrock, my foundation by which I grounded myself and started to live and grow again.

So when @Djfet posted about her project I acted on that same gut instinct and contacted her. The next logical connection was to ask Molly if she would be my photographer. Arrangements were made and the day arrived far quicker than I thought it would. Although this was the first time I had actually meet @Djfet, she reminded me we have been friends on Twitter and Fetlife for 4 years. I had known about her own life changing situations and watched her find and embrace her love of rope and have a real feel and understanding for the ethos behind it.

From the moment the session started and I felt the rope tighten around my chest it forced me to concentrate on adjusting my breathing to accommodate it. As the session progressed I found myself filtering out the familiar sounds of the house, the click and whoosh of the central heating.  Michael tip tapping on his keyboard in the living room, Molly’s gentle footsteps and the peep and click of the camera. All I could hear was the rope sliding through @Djfets hands and her steady calming breathing behind me. I felt the comfort and tug of the rope as she worked. The sun on my exposed flesh which added to the safe warm feeling.

It was only when the last knot was tied, the blindfold was on and I was placed it the position in the image above, did she step back and break her physical connection with me. I felt the briefest moment of panic and doubt before letting it go and allowing it to dissolve, I had been carrying that feeling far to close to me for far too long. I was in one of the safest environments I knew, with people I trusted.

I instead did the one thing I had been fearful of doing for so long. I submitted to myself and reconnected with a part of me, which allowed me to trust and believe in myself, my instincts and decisions. I am not sure how long I was there like that. It could have been 3 seconds or 30 minutes, all I know is that a sense of calm contentment came over me. Shortly after, as fate would have it, one of Molly’s cats decided it would be a good time to investigate the white back drop and made it tumble. @djfet put her arms around me and reassured me I was safe.  Molly and Michael reacted quickly and calmly, catching and putting it back in place and all was well again. I felt that piece of me firmly click into place back where it belonged, never to see the dark inside of my metaphorical box again.

I still have that calm contented feeling all these weeks later.

On the Right Foot

Only one thing a girl can do

Oh I am so glad you wrote about your experiences.

I can feel the calm washing over you as I read and having a similar experience last summer, which you witnessed, I can relate to that reconnection. You have left me feeling all warm and fuzzy.

A warm and fuzzy Bee, What a wonderful thought 😉

Your post made me cry. I don’t know why, but it did. It’s not bad crying, it was almost like the crying I did when my dad passed away, the sort of crying where the tears fall but you can carry on with whatever you are doing.

I think I shall come back and re-read this post later.

Whatever type of tears they are I am sending gentle hugs and acknowledgment. (((hugs)))

I cannot begin to describe the feelings I had reading this post. It is so beautiful, so special, and knowing both Molly and DJFet personally, I can just imagine the beautiful experience this must have been. Thank you for sharing!

[…] Reconnection – A Guest Post on Molly’s Daily Kiss by @HopeAlways2  By the time I reached the end of this post I had a lump in my throat. This is just SO beautiful and absolutely my top post for this week! […]