Kink Of The WeekOralWicked Wednesday

Let your hair down 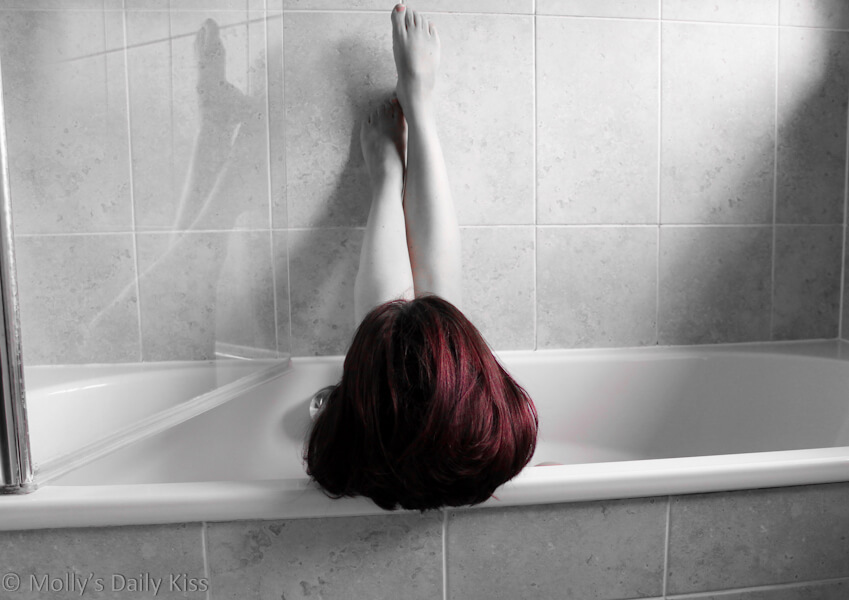 One of the things on my hard limits list is no cutting my hair. When I was pondering the things I should include on that list I read an article that said try to think about things that at first glance might not appear relevant but that if they did you would absolutely not want to do them. I thought about my body and imagined things being done to me that would not be kinky but traumatic. Having someone cut my hair off sprung to mind. It has remained on the list ever since.

It is not that I am particularly obsessed with my hair but I do like it and it is an integral part of the way that I look. Over the years it has changed in length a great deal. I think I was about 14 the first time I cut it short. It went from grazing the top of my knickers to not even reaching my shoulders. It was a bold move, an attempt to change myself and to be honest was pretty much motivated by being very unhappy with the person I felt I was. I immediately set about growing it back and continued to have long hair right up until I was nearly 30. I cut it short again when I became a Mum as it was easier to manage. I have a lot of dark thick hair and when it was long it took ages to dry. It has some version of short ever since.

The greys hair started to appear just before I was 40. Because my hair is so dark they stood out rather dramatically and so I bought a box of dye and for the first time in my life dyed my hair. It is now either a dark plum colour or a dark cherry red but every 6/8 weeks I can see the grey at the roots and there is more and more of the damn stuff. Maybe one day it will be all be a beautiful silver-grey and I can stop with the colouring. I have recently started to grow it again though. I don’t know how far I will get with that but as the years pass by I think if I don’t grow it again now then I probably never will and I am not sure I am ready to say that this is it as far as hair styles go just yet

So what about hair and kink?

Hair can also play a very sexy role in a blow job. I like sucking cock. I like exploring him with my mouth, finding what it good for him, taking my time getting pleasure from giving pleasure but then there are the blow jobs where he is in control and they almost always involve him using large handfuls of my hair to get me exactly where he wants me. There is something fucking hot about that too, being used for his pleasure.

When it comes to hair pulling if it is part of something else then I am totally going to get off on it, but just having my hair pulled is not, in and of itself a turn on to me. Hold me down by my hair while you fuck me and you are going to find me a growling squirming mess beneath you. Use my hair to snap my head back so you can get the knife in just the right place on my neck and I am going to be seriously turned on. It is about the relationship of using my hair to weaken me, to make me give in, to over power me, that makes it so fucking hot.

Seen in the best light

Make something to hurt me with

I enjoyed your post on your hair, Molly. Absolutely gorgeous color and what a photo! Ab Fab in that department, I do see the pink toenails.

Brilliant of you to include “no cutting hair” on your hard limits list.

Forced body mod is on my hard limits list, on both sides of the power equation. It’s an umbrella that covers a myriad of things, which for me includes forced hair changes of any kind, no matter where said hair is located on the body.

Also under that umbrella: tattoos, implants, piercings, permanent brandings, hormonal assisted physical changes, and cutwork. While I could be amenable to some of those things – more the giving than receiving – the key is, they cannot be *forced* (and coercion is a form of force) on either side. That’s a big red X.

First of all, I love the image and I love that color on your hair!
It seems we have the same kind of relationship with our hair, where we love having it touched, whether soft or hard 😉
I didn’t include it in my post, but it’s definitely a hard limit for me to have my hair cut for kink. No way!

*nods along* I won’t cut mine to suit anybody but myself. I do however use my hair as a way to rebel. I wasn’t allowed long hair as a child so when I reached the teen years I grew it so long I could sit on it and dyes it every colour under the sun. Then when I fancied a change an ex asked me not to cut it short…so pixie cut it was!

That’s a brilliant photo, Molly – I like how your toenail polish sticks out in the background in addition to your gorgeous hair. It totally makes sense that you’d cut your hair short when having children – babies grab on to everything!