Kink Of The WeekWicked Wednesday 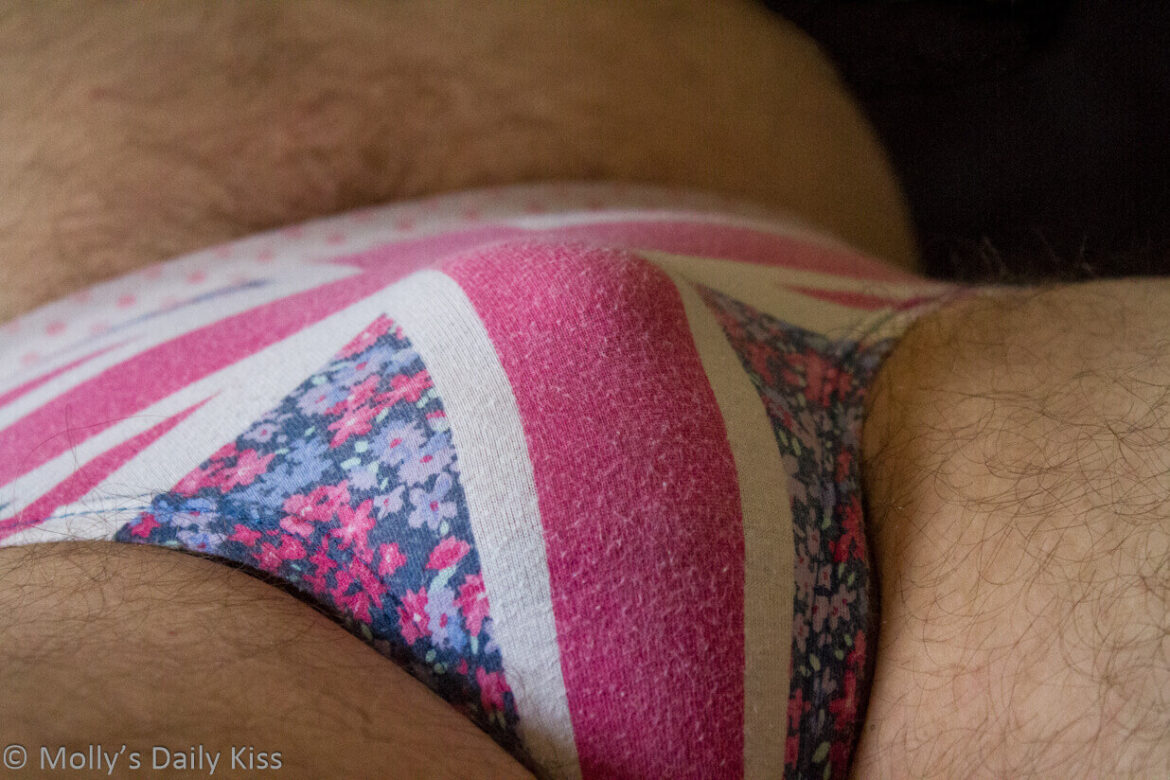 There are many wonderful things about life with Michael but one of the ones that brings joy and happiness to world almost every day is his tendency to be silly and playful. If you are looking for a super serious dom then Michael is not your man. That doesn’t mean he can’t be serious and wonderfully tricky and mean when the mood calls for it but he can be equally as funny and silly as well. One of his favourite sayings is, if you are not having why are you doing it? And it is a sentiment he takes to heart with the result being that even the most dull mundane day to day tasks he can somehow turn into fun. Take grocery shopping, before I met Michael it was something I just did because you had to. I took no great pleasure from it and often found it a fucking drag but grocery shopping with Michael whilst still grocery shopping is far less of a drag when you get to do it with someone who likes to make everything fun. He talks to random strangers, he threatened to buy all sorts of odd things, he will hide behind displays from me, he will sneak up on me, he has even been known to emerge from the clothes section wearing a pair of pink sunglasses and a straw hat. I am fairly convinced that making me laugh is one of his joys in life.

So when I suggested that he try my knickers on one day I shouldn’t have been that surprised when he grabbed them from my hand and slipped them on. He then indulged in some of his best underwear modeling moves that had me in fits of giggles especially when we got to catalogue man poses. Those were definitely my favourite. When I then asked if I could take some pictures I was fairly convinced that was going to be pushing it too far but it wiggled his panty covered butt at me and said sure.

When I returned upstairs with my camera he was laying on the bed looking at his phone. The light was good as was the view and so I grabbed a few shots before he changed his mind.

Afterwards, later, when I was looking at the pictures on my computer screen I asked him how he felt about wearing my undies. His response was basically a shrug of shoulders and something along the lines of it doing nothing for him sexually but that he liked making me laugh.

But what about me?

Much to my surprise I found the images in front of me really fucking hot. Despite this being the prompt on Kink of the Week I actually took these images nearly 2 years ago but never published them because I really had no idea how I felt about men wearing women’s underwear. My brain needed time to work things out but over that time I have seen more images of men in panties and whilst not all of them work for me there is something about some of them, especially where the man is particularly masculine that I find sexy in that kind of naughty way. One in particular that stick in my brain was I believe taken by Kinky and Perky and featured him in a suit revealing underneath a pair of panties. A bit like the man who wearing vibrant pants beneath his trousers or anything that is a bit subversive to the suit, it marks him out as a man with kinky tastes, someone playful, naughty, dirty and that is a sexy thing.

Having said all that there is also just something about they way they look that piques my interest especially when they fit in such a way as to show off that bulge of manhood because that bulge is a sexy as all fuck in my opinion and so I look at these images of Michael and I see that shape and I want to reach out and run my fingers over that fabric. The thought of making him hard and pealing back those panties to reveal his erection makes my mouth and my cunt wet. The contrast between the flowers and his obvious male body hair just makes me think wicked thoughts. I wouldn’t want him to start wearing them all the time but finding he has donned a pair now and then, well that wouldn’t be the worst thing.

And so I have worked out that it is not the feminisation of him that makes this hot for me but what they represent to me, that they suggest a wicked naughty playful side and that they make his junk look fucking hot. That combination I have discovered is a surprisingly sexy one to me! 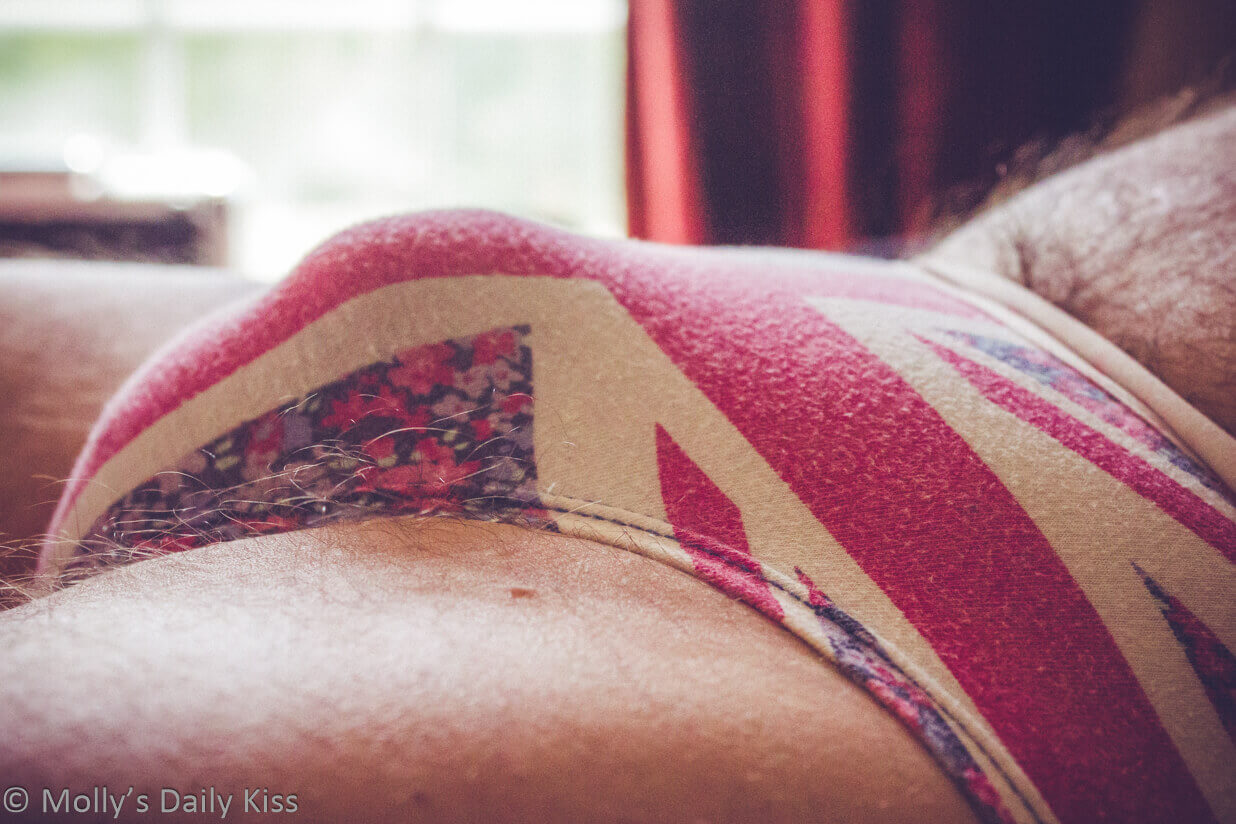 New Voices and other thoughts

Damn sexy indeed, and it makes it even better when there is a playful side too 🙂

First of all, Molly thank you for providing us with this weeks KOTW it has made me beyond happy seeing all the talk of men in panties, it is making me happy in so many ways :p Your writing hit upon lots of the reasons I love seeing men in panties and your photos were an absolutely delightful accompaniment to your post. I’m trying to reply like a polite human being but my insides are screaming at me to just write HOT.SEXY.OMG.YES! over and over again. So I think I’ll just leave it at that and go and get a coffee while I calm down x

I can definitely see the appeal of mean in panties. These picture are very hot! Thanks for sharing! 😉

I’m with you here. I think it’s a damn sexy thing for a man to wear but they wouldn’t be as sexy if he wore them all the time.

Oh man, your words just made me love the images so much more. All the yes

I absolutely love wearing panties with a lady it is a huge turn on for me and so much better shared. Not all the time but just occasionally and it is such a sexy sensual thing to share. It’s hard at first to share my enjoyment of this with a new partner but is liberating when the know!!