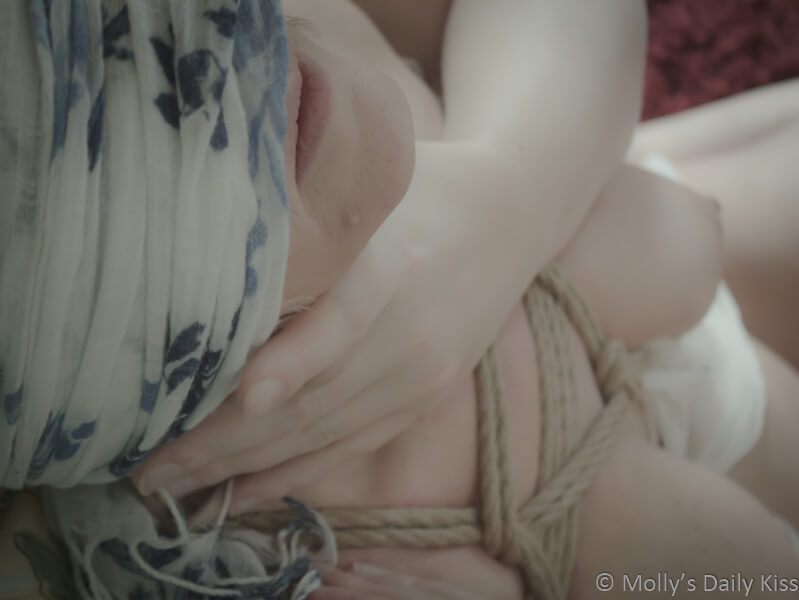 A few months ago a good friend of mine posted a piece on Fetlife called A Cunning Plan. The long and the short of that piece was that

I want to do photo shoots with normal shaped people. This is not about polar opposites – fat or thin, but about inclusion of body types, including thin young, bendy women. Acceptance of rather than shaming. I want to do shoots with people of all colours and within the full range of the gender spectrum. I also want to shoot older people too, not just people in their late teens or 20s. I want to break out of this mould. Hell I want to smash the mould and set it on its arse! ~ DJfet

The next thing I knew my friend @HopeAlways2 was asking me if she volunteered for this project would I be the photographer? The answer was obviously yes. It ticks all my boxes. The idea of the project is to show that rope and photography are not just for under 25 bendy slim people. It was about smashing those stereotypes whilst giving people an opportunity to experience something new and hopefully create beautiful images in the process.

Today, after much planning, @HopeAlways2 and DJfet arrived at my house and we spent most of the day doing exactly that, with plenty of tea, and giggles thrown in. I hope that at some point @HopeAlways2 will write about her experiences today (yes that is an invitation to guest post here if you do) because watching her explore and discover something new was an amazing thing to witness.

In total I took 345 images. Damn I have some serious editing work to do now but this one just jumped out at me and so I gave it a little tinker in Lightroom and sent it to @HopeAlways2 for her approval. Doesn’t she looks absolutely fucking stunning with DJfet’s hand wrapped round her throat?

You can see another image from today’s photoshoot over on This D/s Life, along side @Domsigns thoughts on his day

this is so lovely, the image is intense and filled with light…gorgeous…

such an interesting photo I love all the light in it

This is interesting. It takes a minute to figure out what exactly is going on.

This is so beautiful! The colors remind me of a Renaissance painting – also love the contrast of rough rope against velvety skin.

I like the angle of the picture and the soft colors above the dark carpet. Looks like y’all had a lot of fun – really nice rope work!

I simply LOVE the concept behind this project! It is badly needed I think.
And the shot is beautiful.

That is a fantastic idea and long overdue… DJFet should wander over to my place 😉 Beautiful pic!

Gorgeous image indeed! I can imagine it must’ve been a fabulous day!

Great photo and a great idea. I love rope and I’m definitely not an under 25 bendy, slim person 😀

I really love the way Djfet understands and communicates with rope. I hope to get a chance to experience her talent one day.

Both photos are very beautiful and I love the idea. That’s why I posted a photo of one of my friends who believed that no one would suspend her because of her size and what she sees, and why I always post photos of myself (not a small, 20s woman).

That is so beautiful it actually brought a tear to my eye, I really hope she writes about her experience too, it would be amazing to see this.

I almost volunteered myself for the project and seeing this it makes me wish I had!

I hope she writes about it too.

This is gorgeous! That hand around her throat gets me right in the gut. And I agree with oleander, the colors remind me of a renaissance painting. Beautiful work!

Thank you. I think it might be my favourite image from the whole day but until I edit the rest saying for sure would be jumping the gun

Great work as always. Captivating and arouses the senses.