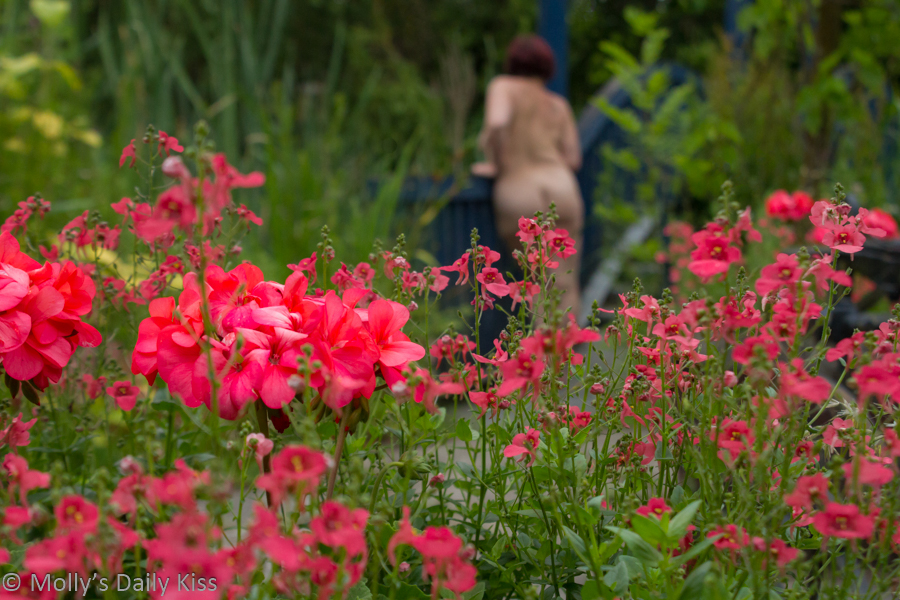 Last Sunday I unexpectedly got invited to a photo shoot at a private garden. Organised by another photographer she had rented the gardens for the day but one of the other photographers had pulled out due to ill-health. Long story short she was given my name by someone who comes to our munch and so I suddenly found myself in rather daunting circumstances. Most of the other photographers had models with them, mainly young and beautiful ones, as well as costumes and tons of props and then there was me with my camera bag, tripod, a small bag of outfits, @domsigns and my friend @hopealways who was to be my model when I was not shooting self portraits.

The gardens were a wild overgrown delight of ponds, bridges, a fake castle, a Roman arch, Greek columns and many other oddities. I spent the best part of 6 hours shooting both myself and @hopealways2 It was amazing to have the times and space to work outdoors without having to worry about being discovered or upsetting anyone and if I got invited again I would be there in a heartbeat. Despite being very nervous about working in front of other photographers and worrying about whether my work was up to scratch in the end my fears were unfounded as they were all absorbed in their own work and the private Facebook group where many people have shared their images from the day tells me that the standard of my work is most definitely up to scratch.

Anyway, this week has been insanely busy and so I have had very little time for editing the images I took but I did manage to get this one done and I thought it would make the ideal summer-time Sinful Sunday

I’ve got the power

Come to my window

That lusty month of May

this is so lush, and even out of focus there is something compelling about you in the background…lush i say!

I really love the way this photo focused on the flowers … and then there’s this luscious callipygian nymph in the background!

Beautiful photo. I am mildly envious that you had this opportunity. 🙂

A private garden where you can do nude photography… now I need to find one of those 😉
Of course your work are definitely up there with the others. You are a natural talent!

Once again I’m in awe of your confidence and ease.

You have no worries about your work being up to scratch. Your pics are always amazing, and I love how my eyes are drawn back and forth between the lovely sight in the front and back of the shot.

Never ever doubt your skill and ability in all areas of your photography. As I think this image and today’s 365 image speak for themselves.

What a wonderful image from what must have been an amazing day. I definitely hope to see more images and that you have more opportunities.

I’d say the flowers are pretty but the lovely flower running in the background caught my eye. 🙂 XX

So gorgeous! and gives me an idea for how to set my next outdoor shots 🙂

It’s the perfect summer time photo! Love the focus on the brilliance of nature and the soft focus tease of you

A Molly classic – so beautifully framed and joyful – love the curve of your back as you pose.

How lucky to have gotten that opportunity. I’m jealous. Wow,super jealous. Nice shot

Most are in agreement of how lucky you were to get such an opportunity to participate in.
Your photo is sensual & romantic. Leads me to think perhaps your lover is on the other side of the gate, perhaps you just left your lover….so many thoughts.

I told you there was nothing to worry about, you are a fabulous photographer and this is a stunningly beautiful image.

I so love the crisp pink flowers in the foreground and the hazy image of your naked form in the background. It’s almost like an afterthought…a secret…if you look close enough you’ll see. Oddly, by not making you the focus, it truly DOES make you the focus.

I adore the contrast between the crisp flora and your hazy form, between the pink petals and verdant stems and your beautifully creamy skin.

An absolutely stunning shot that leaves me in little doubt of your talent once again.

Oh, this is so lovely! It really does feel like I’m a voyeur, peeking over the flowers and catching a fairy bathing. You always take such breathtaking nature shots, I’m so glad you had this opportunity to shoot in a private garden and I hope you’ll get many more.