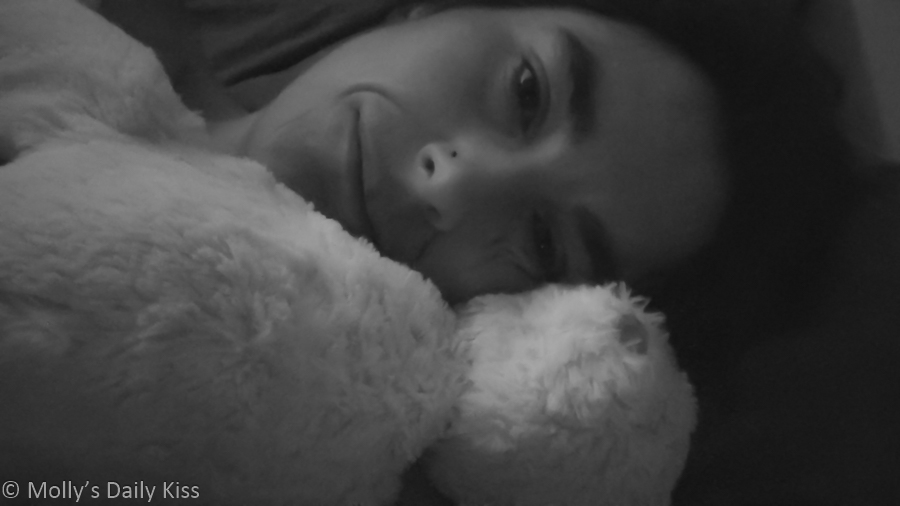 When he first bought Teddy for me I eyed him with suspicion which quickly turned to irritation. I don’t really know why but it just annoyed me. I think some of it was to do with years of being given non-presents and at the time this one felt rather like that. After all, I am not a little girl, why buy me some silly teddy?

I put Teddy on the corner of my bedside table and left him there. Then one day when I was tidying up he ended up in our bed. I pushed him into the corner by my head and again he sat there, looking a bit unloved and forlorn.

I don’t know what changed but one day I found myself bringing him downstairs with me to sit on my lap while I worked. I know @domsigns noticed but never commented although now I know he was smiling at the change but he is a wise man, and saying absolutely nothing about it was definitely the right move. Anything else would probably have resulted in teddy being banished back to his spot.

It was a few weeks later when Sir was going out for dinner with his friends that things really changed though. He left me a message telling me that when he returned he expected me to be waiting upstairs on the bed in my little girl socks, panties and school shirt. I got ready with a happy smile on my face. I wanted to please him and I love wearing that outfit. Once I was ready I sat on the bed and waited. In that moment it just felt right to reach out and pick up the teddy.

What happened when Sir came home was that he defiled his little girl, removing her white cotton panties and having his way with her and while he did he thrust the teddy into her arms and told her to hang onto Teddy while the bad man touches you. To say I was turned on would be a bit of an understatement.

That night Teddy finally found his place in my affections and my life. Every night when we go to bed I snuggle up with Teddy. He is no longer perfectly white and fluffy and I have even considered putting him in the washing machine but I rather like that he is becoming a little disheveled and he has such a wonderfully comforting aroma; the unique scent of our sleep, which I adore. It took a while but that Christmas present turned out to be one of the most precious and wonderful gift that @domsigns has ever bought for me. I love my Teddy

I want to go home.

I have my own Teddy. His entry into my life was different but he is also very loved. Yay for Teddy and others like him. 🙂

My teddy is the same age as me, he was brought into the hospital by my father after I was born and he has been with me ever since. He has no fur and is somewhat fragile now, but he still lives in my bedroom, although not in my bed any more as he is just too delicate now to risk being there.

Your teddy is the perfect teddy for you and @domsigns and will have a special place in your heart always.