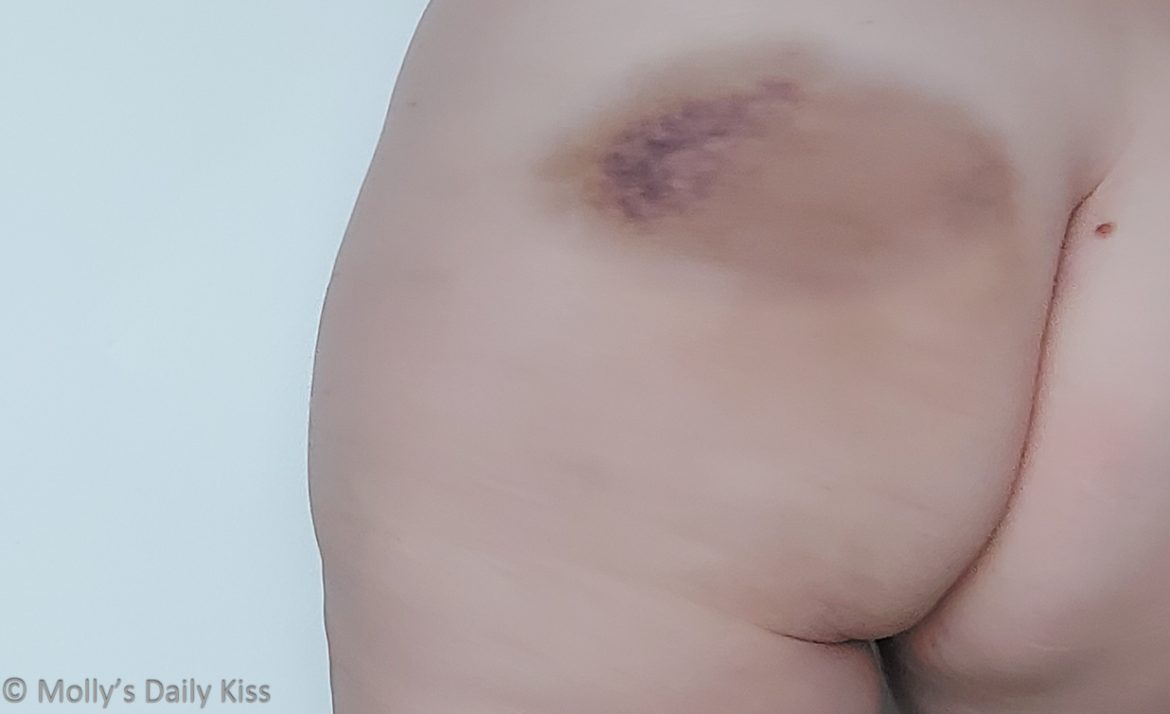 “…when pain is over, the remembrance of it often becomes a pleasure.” ~ Jane Austen

Ahhh Jane, little did you know when you wrote this that so many years later some kinky pervert would use it to illustrate a series of images of their bruises bottom, but there you go.

The last few years I have not really had any chance for some real proper impact play. There has been the odd bit here and there but a proper beating was well over 2 years ago. When you live without something for so long the aching longing you have for it gradually subsides. It never went away completely but is dulls from an intense ache to an itch now and then.

Impact play also requires some confidence. The more I didn’t have any the less confident I was that I liked it and/or that I could take it. I felt a sense of fear at potential play that I would be disappointing. That I would be asking to stop before it even got going. That one strike of the paddle would have me hot footing it out the room. It had been so long I had no idea what I even liked any more and if I even liked any of it at all.

But the itch was still there.

Sometimes I would reach for the little leather tawse I bought myself and use it on my thighs over and over until the skin was peppered with little bruises. Other times I would reach to the pegs, pinning them to my breasts or labia and making myself come through the pain.

I really had forgotten though what it was like to get a beating. How it made me feel. The physicality of riding the pain, drifting from, oh that feels so good, to, that is right on the edge of what I can take and then back again as the person beating you eases on and off the intensity. How you fight it and then relax into it. How nothing else matters in that moment because your whole brain in taken up with focusing on what is happening to you. It fills your head crowding out everything else. It is utterly consuming and it is so goooooddddd.

I had forgotten all that. I had forgotten what an amazing reset it can be. I had forgotten how relaxing it was. I had forgotten about the amazing sleep you get afterwards, how when you wake in the morning and remember a huge grin appears on your face. How every time you sit down there is a reminder of what happened, of what someone did to you and that kicks off a little spark of happiness and an even bigger spark of desire.

I had forgotten it all until a recent reminder of all of the above and then the joy of beautiful deep bruises. How red and blushing they are when they start and then how they deepen into a dark purple stain that seeps across your skin. Oh the bruises. I think in some ways they are my favourite part and it had been so long since I truly had proper vicious bruises that I had forgotten the joy of watching them change each day but also that little tinge of sadness when after more than a week all that is left is the faintest of smudges.

I took a picture every day. Sadly I wasn’t thinking when I started taking them that I would end up posting them. I was truly just taking them for me. So that I could see it properly each day. It was only after the third day that I thought about sharing them here and so started taking the images in the same aspect ratio. However that meant I had to put some of them on a canvas to make them the same size for the slide show. And yes that is a tampax string you can just spot in one of them. But this is not about photography this about dirty kinky bruises and how they look just hours after they were made all the way until they are almost gone. This is about the pleasure I get from watching them and how they remind me of what took place and the intense orgasm I had at the end of this play.

It had been so fucking long since someone beat me I had forgotten how much I loved it and the effect it had on me. I don’t want to forget again.

On a Summer’s Day

Thank you for sharing this, you’ve put the words to feelings that I’ve had, an excellent and empowering read, thank you again! Love your posts!

I’ve never been enticed by impact play, but I fully understand the feeling of pushing through physical pain. Glad you had the idea to track the progress!

I’ve had very few opportunities to get involved in impact play but have discussed it recently with a good friend. I can imagine the feeling you get and the memories of it from your words.

Oh I love these images and what you write about in regards to impact play.
I posted an image the other week with my marked butt for the M prompt, and while I knew I liked impact play, that session and subsequent post along with this one is making me want more than ever to get to it more than just solo.

Such a pretty bruise, I’m so envious! Although I did have some lovely marks of my own this weekend.

I can so relate to all of this. It’s been about 3 years since I’ve last had any impact play. I can feel the intense longing in my heart for it quite often. When I see your bruise, it makes me happy for you but also so envious. I wish I had someone that I could experience this with. I miss it so.

I hope you find someone to give you that soon

to quote Rod Stewart, “you wear it well”… bruises complement your curves