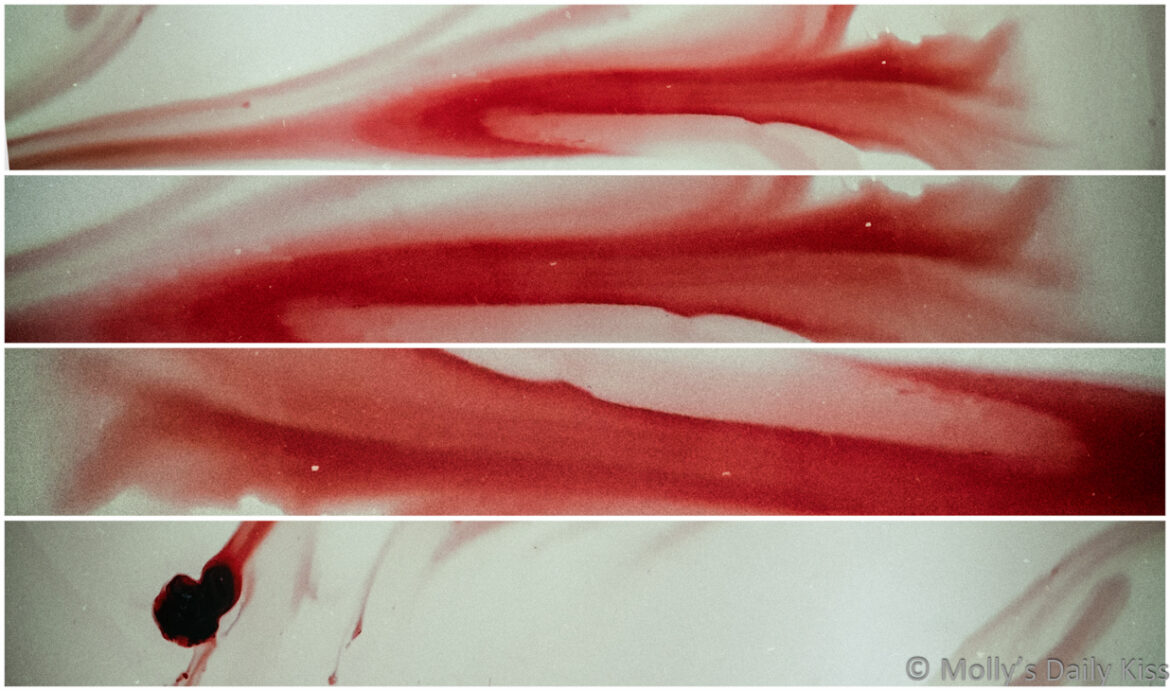 It rather snuck up on me. I had no idea it was about to burst into my life knickers. Over the last year or so the whole thing has become a bit flacky. Sometimes it happens and sometimes it doesn’t which means that when it skips a month or so you lose track of when it should be and so.. Surprise!

I used to be fucking terrified of the menopause. I worried that it would rob me of a fundamental part of who I am, namely my sex drive. I am sure there would be some people would think that was silly or frivolous but they are wrong. It is neither. Loving and wanting to have lots of sex is just a part of who I am. It always has been and it is something that I have learned to not only embrace but to celebrate and enjoy.

Even this past year or so where I have only actually had partnered sex about 6 times (I HATE Covid) I have still engaged with my sexual self as much as possible. I played with sex toys more than I have at any other times in my life and enjoyed a fair bit of porn too. Learning to nurture my sex drive on my own without very limited engagement with partners has definitely been a huge change and not one I can say I have thoroughly enjoyed but it has made me realise that sex with myself is just as valid as sex with a partner. Although you know what you can’t do? You can’t kiss yourself and I miss kissing soooo very very much. I would be more than happy to go on a kissing date with someone where that is all we did. *wistful sigh.

My reason for bringing this up was my period/menopause and my fears around it relating to my sex drive.

Ageing is actually in many ways kinda cool. You definitely learn to give less fucks as you get older and also you start to realise how precious all the moments are but physical ageing sucks. In my head I still feel about 30 but physically I am most definitely not. However so far the peri-menopause has not been as bad as I was expecting. I have very few of the symptoms at the moment apart from my periods becoming erratic and when I do have them they are shorter and lighter than ever before. I am not going to complain about that and actually going weeks and week without one at all, well again not something I am going to complain about. As for my sex drive. It seems to be fairly in tact and when it comes to vaginal dryness, at the moment I see to be one of those women for whom the opposite is true.

I have shied away from confronting this subject for a long time now. Choosing instead to ignore it in the hope that it would just not happen. Yeah I know, but it was easier to ignore that fear than talk about it. Also I now recognise that there is a part of me that carries around an element of shame when it comes to this subject and also has subconsciously absorbed the narrative that there is nothing that sexy about older women. The whole, ‘she is dried up’, idea is one that I think has added to my fear and also my reluctance to tackle this subject.

Even as I write this there is a tiny part of me that is worried that maybe one of the people I am going out on a date with might read this and it would put them off but then I realise if that is the case and they are bothered about me being 49 or not having an idea when my period might start any more then really they have just identified themselves as someone who is most definitely not worthy of my time, attention and kisses.

So today I got my period. (Although I did have sex since that last time I had my period at least I have not had to do ANOTHER pregnancy test) Will there be one next month? Who the fuck knows. Sometimes there are 2 or 3 month gaps then it reappears every month like clockwork for 3 or 4 months. It’s a bit hit and miss. I have no idea if some of the other peri-menopause symptoms will start to appear over time or if this is it but what ever happens I realise that pretending it will somehow not happen or not talking about it honestly and openly doesn’t help anyone most importantly of all it doesn’t help me. It is what it is and to be honest, not having my period any more sounds like a pretty good plan right now.

I would go from getting my period every couple of weeks to skipping months. Now no more periods. It is fantastic! I recently had bloodwork done to confirm that I don’t need to worry about pregnancy anymore. Also fantastic!

The hot flashes are the only thing that has embarrassed me about it. I had to stop in the middle of sex once because I was having such a bad hot flash.

If anyone takes issue with perimenopause then they certainly aren’t worth your time! I hope your feelings around it improve and you can embrace it. Older women are sexy AF! Just don’t watch me trying to get up after sitting on the floor. That is so not a sexy look for me. Aging does suck in some ways.

Molly, I may be 60 but even when I was 18 older woman were always appealing. When I was in my early teens I read Benjamin Franklin’s treatise on the choosing of a mistress. That may have colored my opinion. He advocated that the older the better.
Experienced
Know what they want and are willing
Will not make you guess about their intentions. Straightforward.
Are past playing games unless it’s a game everyone understands
No hidden agendas

And as for the libido waning with menopause. It is my understanding it varies. Personal experience says it does in some and it doesn’t in others. Just keep writing, pleasuring, and dreaming about sex and you will probably continue to enjoy until the end of your days.
Just an opinion backed by limited data set.
Your mileage may vary.

Sorry for the essay. I’m a little wordy today.

Thank you. And I think you are right, having the right mindset is half of the problem

When I got my IUD, my period stopped. It’s glorious! But yeah, I’d be concerned about lowered sex drive, too. Hopefully it’s not an issue!