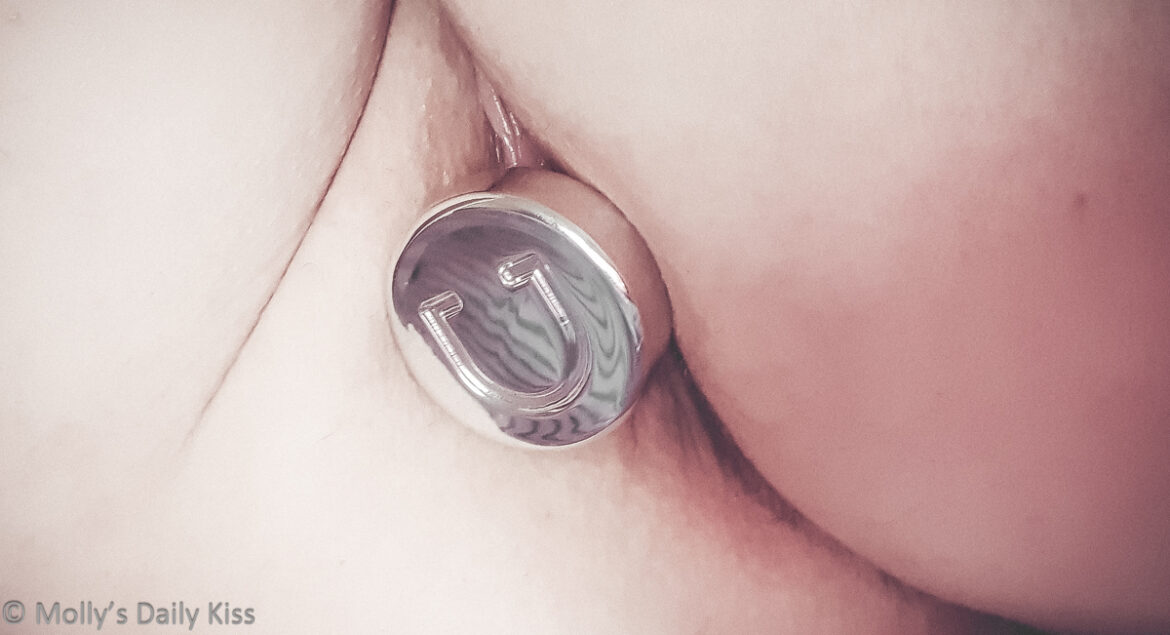 When it comes to wearing a plug I have discovered a new candidate for my favourite butt plug ever award but my butt plug experiences have not all been happy ones.

A couple of weeks ago Girl on the Net wrote a post about a traumatic incident she had when a butt plug managed to disappear inside her while she was having sex with her partner. She is not alone in the horrendous adventure because it is something that happened to me once too.

However it left me hugely traumatised when it comes to wearing plugs particular during any other penetration. I still use the jeweled plug but only to wear out or in preparation for something else. I would never wear it during any other sex or afterwards. When it comes to wearing a plug during sex I actually tend to prefer using a dildo that has a base so that either me or my partner can hold it. I need to know that is happening, someone is holding it, otherwise I just can’t do it. Just the thought of it makes me heart race and not in a good way.

I have a number of different plugs now but recently I acquired the treasure you can see in the picture above. It is the Doxy plug and oh my goodness I love it so. It has a beautiful tapered head and a lovely narrow long stem (which is the key to a great plug in my opinion) so you can close properly around it and as you can see and nice wide base. Would it be better with a T shape? Yes probably but I feel quite confident about the base it has. It is definitely substantial enough that you or a partner could easily hold onto it. I know you shouldn’t have to me but I need that now to feel comfortable but when it comes to wearing a plug this one feels so damn good.

Sadly it has to be given a full test run during sex but I hope to correct that as soon as possible and when I do I will be sure to report back if it ticked all the boxes for us both or not. In the meantime though I shall continue to put it to good use all on my own!

Hold back the river

What a hot pic. And thank you for this post too. It’s great to know I’m not the only person this has happened to.
Missy x

Well, I DEFINITELY NOT going to.use one! I’m quite happy for Rex to use his cock, but its attached to him! I can imagine the helpless feeling!
X
Naomi

Oh my goodness! I’m just starting my adventures with a plug and have been very wary of fucking with it in…might just stick to playing with it for now ?

What a perfect photo Molly, beautifully shot ♥️ you certainly did put it to good use x

I love your wonderfully hot photo Molly. The plug draws the eye immediately and sets off lots of wicked thoughts.

I had an oppurtunity to test one of these and I opted not to – I am half tempted to try it now!

I read GOTN’s post too and discarded every round plug immediately (yeah I am panicky about this as well). I got some t-shaped ones for wearing and for sex I tend to use a Nexus prostate toy which has a handle…perfect for her to grab 🙂

Love the Doxy ones though…pricey but the metal looks and feels great. It looks more like some kind of butt jewellery.

A totally hot image, and a beautiful plug too!

I was so paranoid about losing the plug inside me that after a near-disappearance I insisted on always tying a shoestring to them. Now that I have the njoy instead of a jewel end plug I don’t worry about it, because it doesn’t seem to want to go anywhere.

That’s absolutely beautiful. I haven’t had that experience, but reading both your posts makes me a little wary. Looking forward to reading the update when it happens. xx

Now I have the duck tales theme song in my head, lol. That is such a terrifying story, I would have totally freaked out too! I once lost a condom inside of me and I had a full on panic attack about it. The plug you are sporting here looks very awesome!

I’ve been eyeing these up too. I don’t actually *need* another plug but they look so pretty! I thought the base looked quite small and I prefer tea t-bar so decided against it. I maybe changing my mind.

Something similar happened to me. But on the other side (Vagina). My man put me one in it (and one butt plug atthe same time). After a while, he removed the butt plug but forgot the other one.As he was, well, doing his action on me, I also completely forgot about it. Result: the plug went up to my stomach and I needed a while to remove it.
Funny story don’t happen only to others:)